Borussia Dortmund: The structures behind the club's fight against the far right

The German club was awarded UEFA’s Equal Game award for promoting diversity, fighting racism and tackling far-right tendencies among their fans. These are the structures behind the club’s long-term concept. 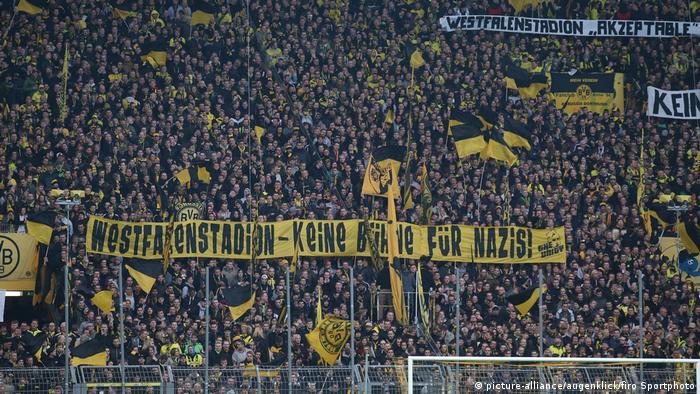 At the Champions League draw in Monaco last week, Borussia Dortmund were awarded UEFA's Equal Game award in recognition of the club's work in fighting racism and promoting diversity.

In their explanation for choosing BVB as this year's winners, European football's governing body highlighted the club's long-standing fight against far-right extremism within its own fan base, as well as its stance against racism and other forms of discrimination.

Club CEO Hans-Joachim Watzke told UEFA's website that the club's social involvement in the community in which it is based is "very important" for everyone at the club, while UEFA President Aleksander Ceferin said that BVB have "set an important example for other clubs to follow."

Dortmund's stance is the result of a preventative, proactive approach which has been over three decades in the making, and which involves the club itself, the anti-racist element within its fan base and the local "Fanprojekt" - the Dortmund branch of German football' youth social work program. 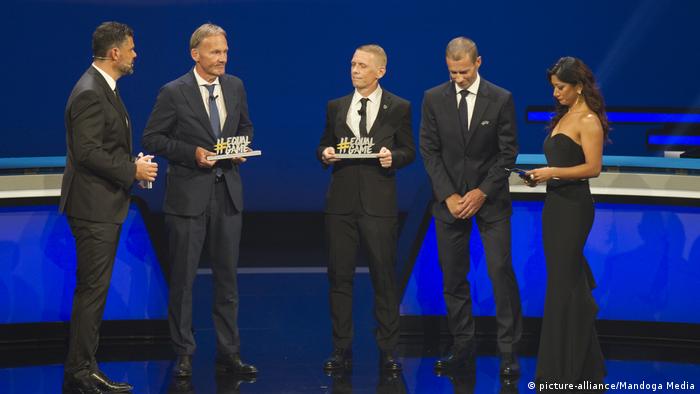 'Show people they're not alone'

Crucially, Borussia Dortmund support and strengthen the democratic, anti-racist groups and initiatives within their fan base. One example of such an initiative is ballspiel.vereint! - a play on words combining the club's full name, Ballspielverein Borussia, and the German word for "connects."

The initiative was established in 2014 and is independent from the club. According to its website, the initiative aims to "raise awareness of daily discrimination in connection with Borussia Dortmund."

In a conversation with DW, a ballspiel.vereint! member spoke about how the idea for the fan initiative came about. "More and more people thought they were alone in thinking certain chants or certain banners were not OK," said the fan, who didn't wish to be named. "We're there to show people they're not alone."

The past five years have seen the club become more and more sensitive to topics such as discrimination and extremism as the club's leaders have realized the importance of being active in the fight against racism and the far-right.

"Watzke speaks out about these topics more and more," said the ballspiel.vereint! representative. "Sometimes I think to myself: I'm not sure he would've said the same thing five years ago."

In order for fan clubs to be officially acknowledged by BVB, they are obliged to sign a list of statutes that include rejecting far-right extremism and racism. Accepting Germany's constitution is also one of the prerequisites for joining BVB as a member. Fans that are found voicing support for far-right ideologies could face stadium banning orders or exclusion as members.

For several years now, Borussia Dortmund have been working with the Fanprojekt to organize educational trips to former concentration camps for young fans. The trips cost just €50 euros ($56) including flights, accommodation and other expenses, with the club covering the rest. CEO Watzke took part in such a trip himself in 2017.

Holocaust memorial plays a big role in BVB's concept for countering far-right tendencies. The club recently donated one million euros ($1.1 million) to the Yad Vashem Holocaust museum in Jerusalem. Watzke also attended a meetup of the Israeli BVB fan club, with the club issuing a special scarf with the words "Remembering together: Together against anti-semitism" in Hebrew.

It's not only fans who take part in educational activities; employees from various departments at the club attend them, too, as do sponsors such as Evonik. The club also educates stewards who work at the Westfalenstadion on matchdays. They learn how to react to discriminatory incidents, as well as how to recognize symbols associated with the far-right.

Borussia Dortmund's work in combatting discrimination would not be possible without the work of the local Fanprojekt, or "fan project" - a youth social program developed in Germany in connection with football in the 1980s, when chants about "sending opposition fans to Auschwitz" were often heard in German stadiums.

One of the most notorious groups at the time were the Borussenfront, a hooligan group from Dortmund whose members were associated with the far-right.

The fan project is manned by social workers who are tasked with making contact with young football fans, gaining their trust and providing assistance in cases of conflict with the club, the law or other fans. The fan projects are entirely independent but do aim to work closely with clubs.

Michael Gabriel is the head of the Koordinationsstelle Fanprojekte (KOS), a body that overlooks the work done by the 50 fan projects across Germany.

"When we talk about German clubs who lead the fight against racism and far-right extremism, Borussia Dortmund is always mentioned, and rightly so."

Football as a mirror of society

Social and political developments in Germany, including a political shift to the right, are well documented, and Gabriel fears that such currents will grow even stronger. "The work of those that stand up to racism and believe all people are equal will therefore become ever more challenging," he admits.

Back in 2017, BVB CEO Watzke told German outlet t-online that football serves a mirror of society, adding that it "has a duty" to fight back against extremist tendencies.

"We shouldn't close our eyes," he said.