Borussia Dortmund's ultras have done more than most to combat right-wing extremism in German football. But according to local media, their hegemony on the Südtribüne has been challenged by some unwelcome visitors. 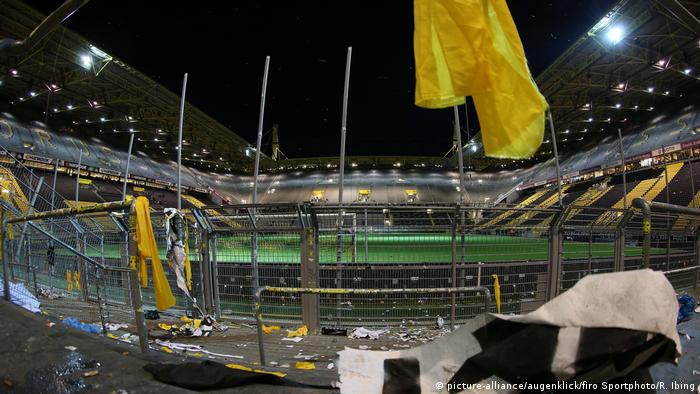 When Robert Lewandowski's injury-time backheel for Bayern Munich was ruled out for offside last week, Borussia Dortmund's Westfalenstadion was engulfed in a wave of euphoria.

After twice coming from behind, Dortmund had seen out a 3-2 victory that sent them seven points clear of their Bavarians rivals at the top of the Bundesliga. Lucien Favre's young team is brimming with confidence and the famous Yellow Wall is dreaming of a first league title since 2012.

For one section of the Südtribüne (south stand) however, Saturday November 10, 2018 was a day of fear, and it had nothing to do with events on the pitch.

Block 13 at the foot of the huge terrace is home to Borussia Dortmund's ultras – the hardcore, vocal supporters who follow their team home, away and around Europe and who are responsible for the spectacular displays and choreographies which have given the Yellow Wall its reputation.

But ahead of kickoff against Bayern, according to a detailed report by Dortmund newspaper Ruhr Nachrichten, two unwelcome guests appeared in Block 13: Sven Kahlin, a hooligan who was sentenced to seven years in prison for manslaughter in 2005, and Timo K., a mixed martial arts fighter who was handed a five-year football banning order in 2012 after holding a banner in support of the banned far-right group Nationaler Widerstand Dortmund (National Resistance Dortmund).

Both have kept a low profile in recent years but both attended the Bayern Munich game with members of the Northside hooligan group. Once inside Block 13, they demanded that the ultras shake their hands – a symbol of forced acceptance and a demonstration of power. The message was clear: any ultras who refused would face consequences. The paper adds that fans in Block 14 reported chants of "Sieg Heil" from people with shaved heads near the fence at the bottom of Block 13 while the club say they intend to ban the two men.

It wasn't the first time this year that the Northside hooligans had confronted Dortmund's ultras. On March 24, reports the Ruhr Nachrichten, after a BVB reserve match in the regional fourth tier, 25-30 Northsiders confronted around 50 younger members of The Unity – the largest Dortmund ultra group – at the group's base to the east of Dortmund city center.

According to the newspaper, the ultras were forbidden from leaving the base and were made to listen while the hooligans announced new "rules" to bring about a "de-politicization" of the Südtribüne. In other words: no more anti-racist, anti-fascist or anti-homophobic messages. No more left-leaning politics. 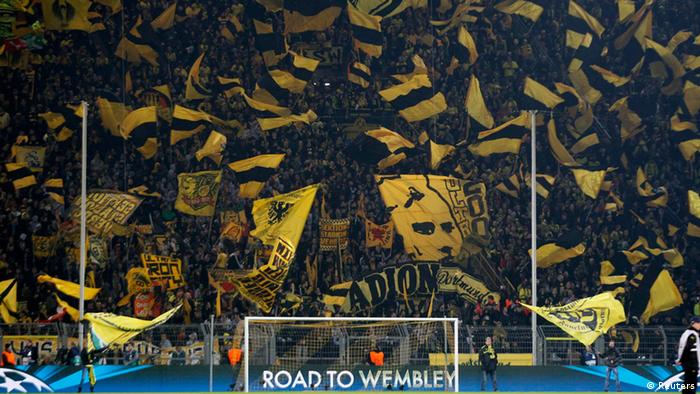 Block 13, behind the goal, is the heart of the Südbtribüne and the home of Borussia Dortmund's ultras.

There was a time when far-right ideologies were commonplace within Borussia Dortmund's hardcore support. In the 1980s and 1990s, the so-called Borussenfront became one of Germany's most notorious hooligan groups due to their links to the far-right.

Over the course of the last two decades, thanks in part to the growth of the generally left-leaning "ultra" movement across Germany at the start of the millennium and the work of state-financed Fan Projects (including the Fanprojekt Dortmund), right-wing extremists have gradually been forced out of the Westfalenstadion.

But the problem has never been completely eradicated. In the wake of the 30th anniversary of the Borussenfront in 2012, the group became more active. At a Champions League game in Donetsk, Ukraine, in 2013, two supporter liaison officers from the Fan Project were physically assaulted inside the away end.

And in October 2015, after supporter liaison officer Daniel Lörcher appeared in a documentary broadcast on terrestrial television entitled "BVB against the far-right," a banner was displayed on the Südtribüne reading: "Lörcher, your time is up."

It wasn't the only death threat made by a new Dortmund hooligan group: 0231 RIOT, named after the city of Dortmund's dialing code. Consisting of more violent elements of the two other BVB ultra groups, the Desperados and the JuBos, the 'Riots'' signature was emblazoned on graffiti which appeared on a wall in Dortmund aimed at club CEO Hans-Joachim Watzke, reading: "Aki Watzke, it's all over. Soon you'll be lying in a car boot."

A year earlier, an eye witness told news portal VICE that 20-30 members of the group had sung anti-Semitic songs on board a football special train to the 2016 German Cup final. The group, which was also suspected to have been behind stickers depicting Holocaust victim Anne Frank in a Schalke shirt, officially wound itself up in July 2017 – but some of its members have now re-emerged as part of Northside. 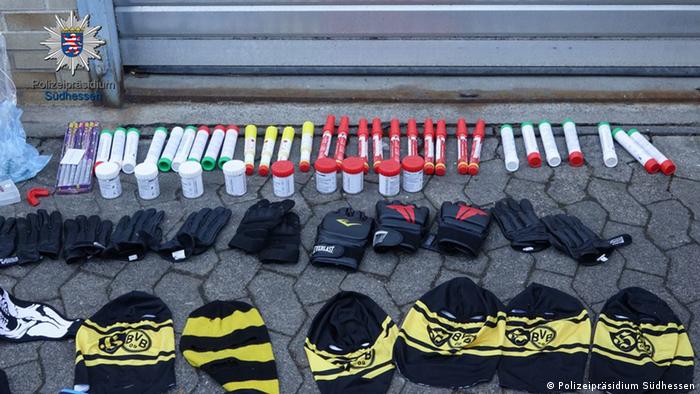 Balaclavas, MMA gloves, mouth-guards and pyrotechnics confiscated from Dortmund hooligans en route to a Bundesliga game in Darmstadt in February 2017.

The recent developments in Dortmund mirror events elsewhere in Germany, where football hooligans with links to mixed martial arts and criminal organizations are increasingly acting as muscle for right-wing, populist political movements.

Football hooligans from across the country took part in the "Hooligans Against Salafists" (HoGeSa) march in Cologne in 2014, and were also among the first to take to the streets in Chemnitz this summer. In Leipzig in 2016, football hooligans were among the 200 neo-Nazis who smashed up bars and shops in the city's alternative Connewitz district.

A similar Berlin-based group was involved in disturbances at two Hertha BSC matches last month. Hooligan group Kaliber 030 were allegedly among those fans who fought with police at half-time during Hertha's Bundesliga game in Dortmund, after a controversial attempt by police to confiscate a flag led to clashes which left over 45 people injured.

And earlier in October, according to research by public broadcaster WDR, Kaliber 030 members were responsible for an attack on a left-wing pub in Potsdam following a friendly against local fourth-tier side Babelsberg. "The group is intent on violence," a confidential source told WDR. "They have active MMA fighters in their ranks and connections to the criminal underground."

On the weekend of the incident in Babelsberg, Kahlin, widely considered to be a neo-Nazi, was in Ostritz, a small town on the Polish border. He was attending the "Kampf der Nibelungen" festival, a mixed martial arts event "organized by and involving young Germans … who don't want to suffer under the yoke of the dominant mainstream." The festival functions as a networking event for the extreme right.

A month later, on Saturday November 10, a few hours before kick-off against Bayern, Kahlin was back in Dortmund and posed with Timo K. and other Northside members for a photograph outside a pizzeria. On the photograph, which Ruhr Nachrichten claim to have seen, faces are disguised with skull and crossbones symbols – imagery often associated with the extreme right.

Once inside the stadium, Kahlin and Timo. K were spotted by an off-duty police officer who alerted the authorities. Borussia Dortmund's club hierarchy was also quickly made aware of the presence of the visitors on the Südtribüne and contacted the police.

But that's a step that the directly affected ultras won't take; an unspoken rule governing the sub-culture stipulates that ultras don't talk to the police, who are often considered just as much an enemy as the neo-Nazis.

At a meeting of Borussia Dortmund's 17,000-member-strong Fan Department (Fanabteilung) on the Monday after the game, a decision was made not to give in to the intimidation from the far-right and to continue to stand up against racism - a laudable position in the face of a sinister reality.