Hundreds of self-proclaimed 'hooligans' from rival football clubs and far-right groups have held a protest against Islamists in the western German city of Cologne. Police used water cannons after scuffles broke out. 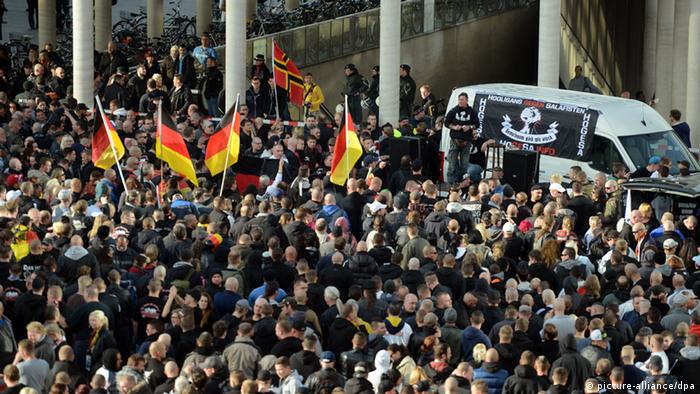 There was a heavy police presence in Cologne on Sunday afternoon, as a rally of at least 2,500 people from the "Hooligans Against Salafists" (HoGeSa) group turned violent. The group, mainly made up of rival football fan clubs and far-right extremists, thronged north of the city's central train station, yelling slogans such as "Foreigners out!"

A police spokesman told German news agency DPA that two water cannons were deployed, and that riled up protesters had mobbed officers and hurled firecrackers, bottles and rocks at them.

"At the moment we're using pepper spray, batons and water cannons to try and get the situation under control," he said. At least 10 officers were injured in the violence.

At the same time, around 500 people were holding a counter-demonstration nearby.

On Twitter, witnesses tweeted photos under the #HoGeSa tag:

The rally was originally registered with authorities by a member of the extreme right party, Pro NRW, which is under federal surveillance.

The HoGeSa, which has neo-Nazi elements among is members, is also being closely monitored by the authorities.

In the lead-up to Sunday's demo, experts were reportedly working to compile information about participants attending the event.

Rainer Wendt, chair of the German Police Union, said acts of violence and the shouting of radical right-wing slogans would not be tolerated.

"The law will be on hand in full force, but with appropriate restraint," he said, adding that officers would have a low threshold when it came to intervening.

Wendt said the hooligan groups and the right-wing scene more generally are trying to exploit anxiety about Islamic extremism in Germany in order to attract new supporters. Salafism is the most widespread form of Islamist extremism in Germany, and calls for a return to the way Muslims lived during Muhammad's era.

The Salafist scene in Germany is rapidly growing, according to Germany's domestic intelligence chief. Radical Islamists have been adept in recruiting disaffected young Muslim men from families with migrant backgrounds. (25.10.2014)