A pro-Israel group says its members suffered antisemitic abuse during Union Berlin's Conference League game against the Israeli champions. The German club said it is taking action against one of the perpetrators. 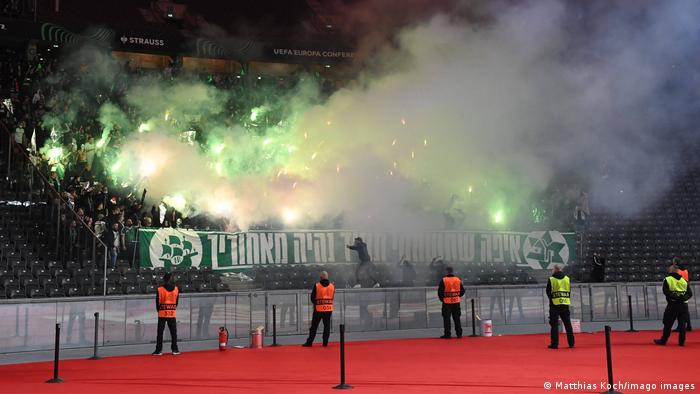 Union Berlin beat Maccabi Haifa 3-0 in their first UEFA Conference League home game of the 2021-22 season. However, it was the events in the stands that took center stage rather than those on the pitch.

A group of people holding Israeli flags in close proximity to the away section said they had experienced antisemitic abuse from some Union Berlin fans.

Members of the Junges Forum (youth branch) of the Deutsch-Israelische Gesellschaft (German-Israeli Society), or JuFo DIG, say they were called "f****** Jews" and had beer thrown at them, and that police stopped one fan from burning an Israeli flag.

The FARE network, which campaigns against racism and discrimination in European football, also reported at least one incident of an Union Berlin fan performing a Nazi salute in the direction of the away end.

A witness told DW that the atmosphere became much "more aggressive" after Union's second goal, with objects being thrown into the Maccabi Haifa section after the third goal.

"We were many fans with Maccabi Haifa merchandise or Israel flags, but we were mostly watching the game passively," the witness said. "We heard remarks such as 'f*** Jews, we’ll finish you off again, f*** your Israel.'"

After asking for more details from the affected people on Twitter, Union Berlin said the club had identified one of those responsible for one of the antisemitic incidents. The club will now start the process of excluding the person from the club, while also handing them a banning order for an unlimited period of time.

“We’d like to thank the Union fans who showed solidarity with those affected,” said Union president Dirk Zingler. “There’s absolutely no tolerance for discrimination at our club.”

The DIG is a Germany-wide organization that supports the state of Israel and campaigns against antisemitism. DIG members come from across German society and from all parts of the political spectrum. Most DIG members are neither Jewish nor Israeli.

"There were also Union Berlin fans who spoke out against this behavior," JuFo tweeted.

The group were then moved into the neighboring away section with the rest of the traveling Maccabi Haifa supporters.

The incidents have been widely reported in Germany, with several media outlets highlighting the unique historical context of the game: It was the first time than an Israeli team had played at Berlin's Olympiastadion, which was built by the Nazis to host the infamous 1936 Olympic Games.

Union are playing their European fixtures at the Olympiastadion, usually home to local rivals Hertha Berlin, because their own Stadion an der Alten Försterei doesn't fulfill UEFA requirements.

Earlier, Maccabi Haifa officials had laid a wreath at the Holocaust Memorial in the center of Berlin. The club later tweeted to thank Union for the hospitality, saying: "It was an exciting game in front of your fans and ours, in a stadium which has its meaning."

Most media outlets in Israel, however, have focused on the atmosphere at the stadium and on Maccabi Haifa's performance on the pitch.

One report does mention the incident and the historical context. "At the end of the day, a game which was supposed to serve as an event of historical reconciliation, turned into a show of hate," wrote Walla, one of Israel's biggest media outlets.

Though the events unfurled in the block next to the away end, the atmosphere among the traveling Maccabi Haifa fans couldn't have been more different.

The game started with a choreography prepared by the Israeli ultras, with the away end filled with white smoke as soon as the game kicked off.

The traveling supporters were in full voice, singing about "90 minutes of green and white hell" and making a good representation of Israeli fan culture against Union Berlin, a club that takes pride in its organized fan and ultra groups.

The contrast between the atmosphere in the away end and the reported antisemitic incidents that took place in the Union stand where Israeli flags were shown, reflects a sentiment shared by many German Jews and Israelis living in Germany: that a feeling of security and safety is only there once they're among their own.

Germany saw a spike in antisemitic criminality in 2020.