Germany's Angela Merkel and Turkish leader Recep Tayyip Erdogan have discussed how to boost economic ties. Erdogan will cap off his Germany trip by visiting Cologne, where some 10,000 people are expected to protest. 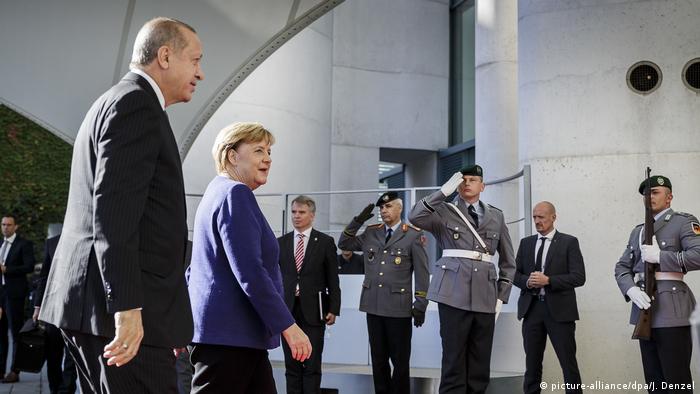 German Chancellor Angela Merkel hosted Turkey's Recep Tayyip Erdogan for a working breakfast in Berlin on Saturday morning, ahead of the Turkish president's visit to the western city of Cologne.

A spokesperson for the chancellery said the two leaders explored ways of enhancing "economic cooperation," before discussing the EU-Turkey migration pact and the conflict in Syria.

Merkel and Erdogan's latest round of talks come the morning after tensions rang high at a state dinner honoring the Turkish leader. German President Frank-Walter Steinmeier lamented the deterioration of the rule of law and human rights in Turkey, while Erdogan accused Germany of hosting "hundreds, thousands" of terrorists. 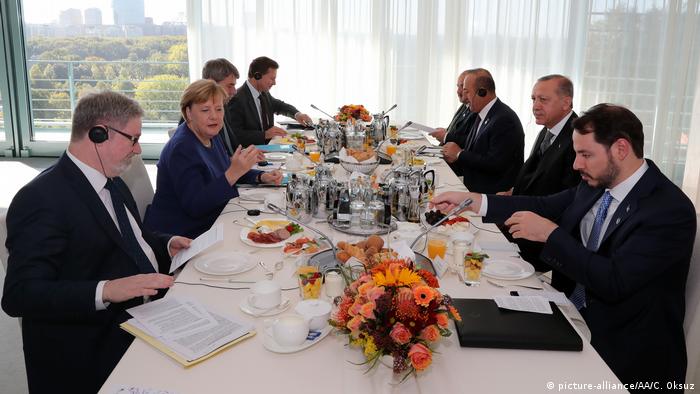 The deteriorating human rights situation in Turkey and the detention of German nationals have soured relations between Berlin and Ankara. The German government has also been a vocal critic of Erdogan's crackdown on opponents following the failed July 2016 coup attempt.

Afterwards, the Turkish president met with prominent business and bank chiefs with the hope of courting more German investment into Turkey. According to the Turkish state-run Anadolu news agency, Erdogan told the group that those who had invested in Turkey were still better off for it. However, the country suffered a crippling economic crisis this summer that saw the Turkish lira lose around 30 percent of its value versus the US dollar.

Following his series of meetings in Berlin, Erdogan will close his three-day Germany by visiting Cologne, where he will hold talks with the state premier for North Rhine-Westphalia, Armin Laschet, before attending the opening of the city's new Central Mosque.

North Rhine Westphalia is home to a significant number of Turks, many of whom arrived in Germany as "guest workers" in the 1960s.

Laschet and Erdogan are set to meet a military facility within Cologne/Bonn airport as soon as the Turkish president lands. The meeting place had to be hastily rescheduled after Wahn Castle, where the two were initially scheduled to hold talks, cancelled the event. The site's owner said he refused to host Erdogan for political reasons.

Erdogan is then scheduled to head to the city of Cologne, where he will give a 15- to 20-minute speech outside the city's new mosque, one of the largest in Europe.

The president will highlight German-Turkish relations but also warn against the increasing threat posed by right-wing radicalism, according to Mustafa Yeneroglu, a Turkish parliamentarian.

Erdogan was initially set to speak before a public crowd at an open-air event outside the mosque, but Cologne officials cancelled those plans on Friday evening, citing security concerns. A Facebook page set up by the organizers showed that some 25,000 people had planned to attend the ceremony.

Instead, only invited dignitaries will be allowed to attend the ceremony, while the general public will be forced to stay away from the area. Laschet and Cologne mayor Henriette Reker pulled out of attending.

DW's William Glucroft is on the ground in Cologne to cover events surrounding Erdogan's visit to the city and mosque.

The new mosque is run by DITIB, a shadowy Turkish-Germanic Islamic organization funded by Ankara that represents some 900 different Islamic groups in Germany. 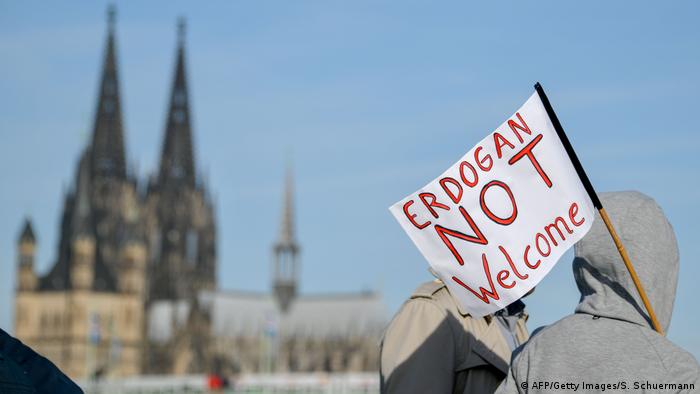 Some 10,000 people are expected to take to the streets of Cologne to demonstrate against Erdogan's visit

Demonstrators protesting Erdogan's Cologne visit got underway early Saturday. Hundreds of people, including several from the city's Kurdish community, gathered in the city's Deutz district on the banks of the Rhine River ahead of a planned march towards the center of the city.

According to authorities, as many as 10,000 people are expected to take part in the protests, although a number of Erdogan supporters also lined the main street leading up to the mosque to greet the Turkish president.

Erdogan was also greeted by mass protests when he touched down in Berlin on Thursday.

Who will succeed Angela Merkel? The candidates to become Germany’s next chancellor faced off in a TV debate. Social Democrat Olaf Scholz produced a solid performance to maintain his hold as the front-runner.