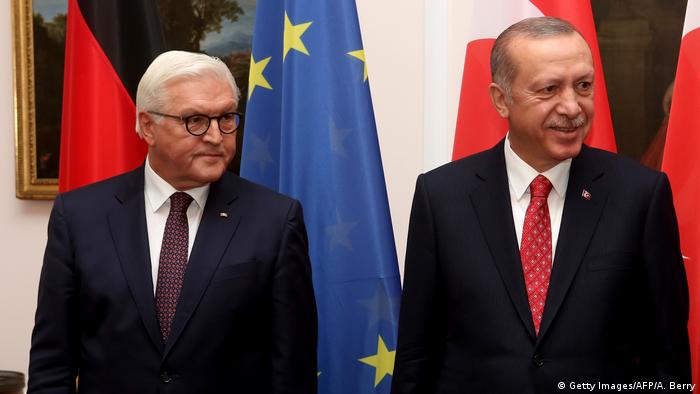 A state dinner for Turkish President Recep Tayyip Erdogan in Berlin became awkward late Friday. In his speech, German President Frank-Walter Steinmeier lamented the deterioration of the rule of law and human rights in Turkey, and Erdogan accused Germany of hosting "hundreds, thousands" of terrorists.

Steinmeier opened his address at the presidential palace by praising a long history of relations between the two countries, including Turkey's role in accepting persecuted Jews and Germans during Nazi rule.

He later alluded to recent times, when thousands of Turkish citizens have sought refuge abroad from an increasingly authoritarian Turkey under Erdogan.

"Eighty years ago, Germans found refuge in Turkey — today, a worryingly large number of people from Turkey are seeking refuge here in Germany from the growing pressure on civil society," Steinmeier said before Erdogan, his wife, Emine, and distinguished guests.

"As we discussed this morning in detail, I am, as president of this country, concerned about German citizens who are imprisoned in Turkey for political reasons, and I am also concerned about Turkish journalists, trade unionists, lawyers, intellectuals and politicians who remain behind bars," Steinmeier went on to say.

The deteriorating human rights situation in Turkey and the detention of German nationals have put an added strain on relations between Berlin and Ankara.

Steinmeier expressed hope that freedom, rule of law and human rights would return to Turkey more than two years after a failed coup attempt against Erdogan.

'Hundreds, thousands' of terrorists in Germany

In his speech, Erdogan among other things told Steinmeier that he seemed to have "received false information" regarding the arrests that have taken place in Turkey.

He also slammed Germany for hosting thousands of "terrorists" from the outlawed Kurdistan Workers' Party (PKK), and the Gulen movement, which Ankara blames for the 2016 coup attempt.

"Thousands of members of PKK, which is recognized as a terror group by the EU, walk freely in Germany," Erdogan said, according to the Turkish state Anatolia News Agency. "The FETO terror organization [Gulen movement], unfortunately, hundreds, thousands of them are walking freely in Germany."

The Turkish president also criticized Germany for hosting Can Dundar, a prominent Turkish journalist living in Germany who was convicted of espionage for publishing stories about alleged arms shipments to Syrian rebels.

"When journalists are involved in acts of terrorism and have been condemned by a Turkish court, how can anyone still defend them?" he asked. "And here he gets a nice role."

Earlier Friday, during a heated press conference with Chancellor Angela Merkel and Erdogan, a Turkish journalist protesting press freedom in Turkey was escorted out of the room.

Erdogan also used the press conference to call for Germany to extradite Dundar, the former editor-in-chief of the main opposition Cumhuriyet newspaper.

Turkey is demanding the extradition of dozens of alleged followers of the PKK and Gulen movement. Germany considers the PKK a terrorist organization but has not applied the same label to the Gulen movement.

Erdogan's three-day state visit has drawn thousands of protesters into the streets. On Saturday, the Turkish president will open a new mosque in the western city of Cologne.

Both the German and Turkish sides are trying to heal relations, which have nosedived over the past two years. In addition to lingering differences over human rights in Turkey, Erdogan's visit is focused on areas of mutual interest such as economic ties, the war in Syria and refugees.

Germany is laying down the red carpet for Turkish President Recep Tayyip Erdogan's state visit, even as he brazenly demands that Berlin extradite his critics. It's a preposterous state of affairs, says DW's Jens Thurau. (28.09.2018)

Turkey's President Recep Tayyip Erdogan is scheduled to open a new central mosque in Cologne. DITIB, a controversial Turkish-Islamic umbrella group, provides the financing and imams. What is DITIB? (28.09.2018)