Amazon reef is huge — and under threat from Total oil drilling | Environment | All topics from climate change to conservation | DW | 18.04.2018

Amazon reef is huge — and under threat from Total oil drilling 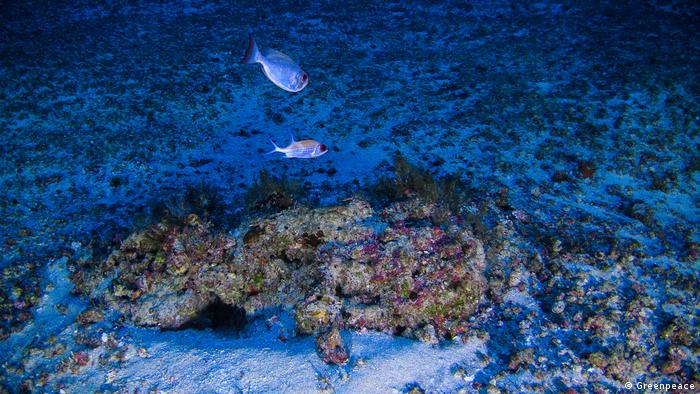 Researchers in Brazil have determined that the reef in the Amazon River delta, first discovered in 2016, is much larger than initially thought. And that means the reef extends right into areas where French company Total plans to drill for oil.

"We found reefs in the shallowest part of the blocks where they want to extract oil," Ronaldo Francini-Filho, a researcher at the Federal University of Paraiba (UFPA), told DW. He is taking part in an expedition backed by Greenpeace off the north coast of Brazil in the Foz do Amazonas basin. "There is an area of oil here that is on top of the reef areas. We cannot fail to consider this."

Total, which has applied for a license to drill at the mouth of the river off the Atlantic coast, is waiting for the go-ahead from IBAMA, the Brazilian Institute of Environment and Renewable Natural Resources. But Greenpeace has said these new findings invalidate Total's environmental impact assessment, which is based on the reef being located at least 8 kilometers (around 5 miles) from any drilling site.

"Now that we know that the Amazon coral overlaps the perimeter of Total's two [oil] blocks, the Brazilian government has no choice but to deny the license for the company to explore for oil in the region," Greenpeace said in a statement on Tuesday. 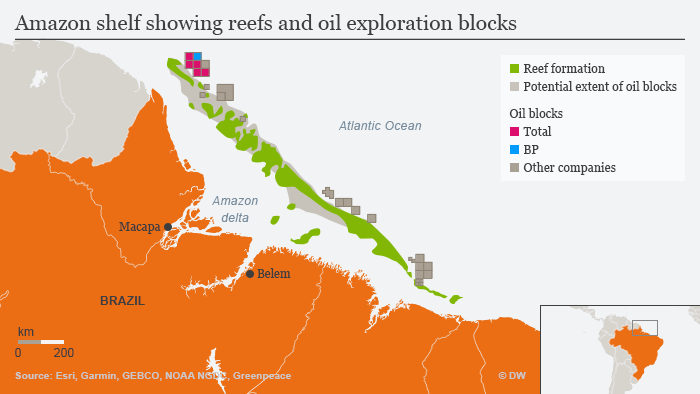 The reef's initial area was estimated at 9,500 square kilometers (3,670 square miles), but the most recent calculation indicates the area is nearly six times that size, closer to 56,000 square kilometers. That would make it the largest reef in Brazil, and one of the largest in the world, according to Fabiano Thompson, a researcher at the Federal University of Rio de Janeiro (UFRJ), who with Francini-Filho was on board the Greenpeace research vessel, the Esperanza.

The reef, at a depth of between 70 and 220 meters (around 230-720 feet), is now estimated to be around the size of Croatia and is home to more than 40 species of corals, 60 species of sponges — half of which are still unknown to researchers — lobsters, starfish and 70 species of fish, among them the critically endangered grouper, which has already disappeared from the Brazilian coast.

Until recently, researchers thought corals weren't able to grow near the mouths of large rivers, where fresh water laden with mud empties into the sea. The cloudy water blocks light, which corals usually need to produce food.

But scientific missions over the last seven years proved that wasn't the case. The reef is able to thrive in the Amazon basin because it is mainly made up of sponges and rhodoliths, a marine algae, along with some coral able to grow at such depths, possibly by using chemosynthesis, which allows them to convert nutrients brought by the river into organic matter. But researchers have said more work needs to be done to understand the reef's unique conditions.

The first images of the Amazon reef were recorded in 2017 on a submarine trip supported by Greenpeace. The most recent findings extending the range of the reef were made in early April as a robot — equipped with three cameras and a system for water and sample collection — beamed images up to the research vessel. 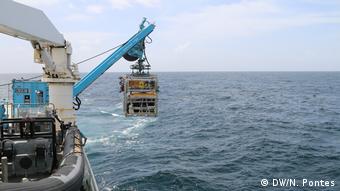 "It's exactly because the access is so difficult and the oceanographic conditions here are so hard that we know little about this place," said Francini-Filho, speaking with DW on board the Esperanza after the discovery. "The little knowledge we have of this region already indicates that it really is an extremely rich area, [and that it would be] sensitive to the exploitation of oil."

He estimates that at the moment, only 5 percent of the life supported by the reef is known to researchers. Greenpeace expects to publish the findings in an upcoming issue of the scientific journal Frontiers in Marine Science.

Faced with the imminent arrival of oil platforms in the area, and this new data, Greenpeace has made the conservation of the Amazon's reef a global priority.

Oil spill would cause 'irreparable damage'

The current research expedition, due to last until May, required more than a year of planning and authorization from the Brazilian government. It cost €700,000 (about $860,000) — an amount that came from Greenpeace donors.

"This scientific research that we do here is urgent to prove that [the reef] really is a new biome, unique in the world, [about which] very little is known to science," said Thiago Almeida, a representative of the Defend the Amazon Reef Campaign.

An oil leak would cause irreparable damage, said Almeida, pointing out that a spill would also threaten the coast and the rivers of the Amazon delta, a region with the world's largest mangrove forests. "We are talking about a threat to various populations of fishermen, extractivist communities, river villages and indigenous people," he said.

"This reef is considered to be an underwater pharmacy. It can pay back dividends to our country if we can develop marine biotechnology from its biodiversity," said Thompson from UFRJ. He listed off bioactive compounds that could be developed for new drugs to treat diseases such as cancer, viruses and infectious diseases, adding that such initiatives are already underway in Europe, the United States and Japan.

Read more: How threatened are the river dolphins of the Amazon? 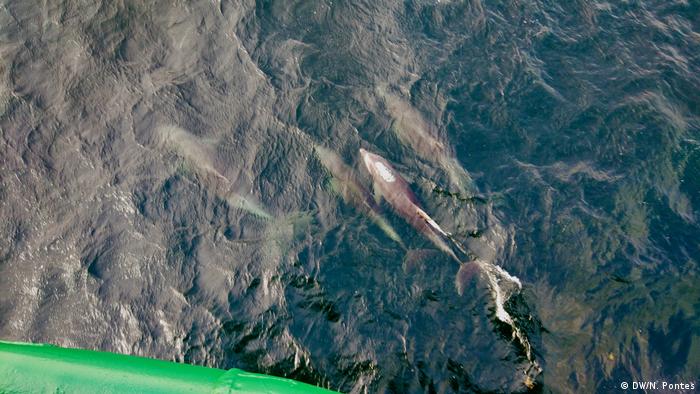 The reef is home to many species of marine life, including the Amazon river dolphin, seen here alongside the Esperanza

The licensing process for on-site oil exploration by Total and Britain's BP is expected to be decided by IBAMA in the coming weeks.

The exploration blocks in the Foz do Amazonas basin region were acquired in 2013 at an auction by Brazil's National Agency of Petroleum, Natural Gas and Biofuels. According to industry estimates, the region could hold up to 14 billion barrels of oil, more than the entire proven reserves in the Gulf of Mexico.

Total would not say whether it knew about the existence of the reef in the region that it intends to explore. "Total responded in January to IBAMA's latest technical opinion regarding the environmental impact study of the well drilling activity that the company plans to carry out in the blocks that operate in the Foz do Amazonas basin," the company said in a statement to DW. "The company currently awaits the organization's position, within the scope of the environmental licensing process that is underway."

The researchers on the Esperanza hope their new findings will be considered in that decision. "This knowledge needs to be used by regulatory agencies, industry and government to make an informed decision that will promote the development of our country," said Thompson.

"Based on the knowledge we have so far, oil exploration here would really be a tragedy," said Francini-Filho. "We know very little of what we are calling a mega-biome: a region connected to the Amazon forest, with the second-largest river on the planet and one of the largest reefs in the world."