Police and protesters clashed as Brazil awarded a consortium the rights to Brazil's huge Atlantic oilfield at the minimum bidding price. Experts criticize the procedure. 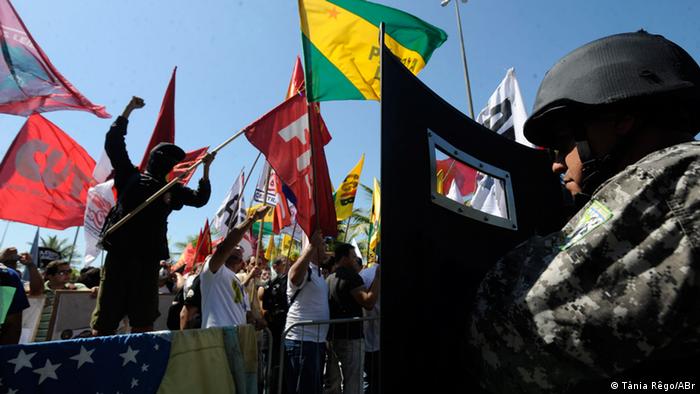 To be on the safe side, the Brazilian government brought in more than 1,000 soldiers to protect the Windsor Hotel in Rio de Janeiro from demonstrators. For months, violent clashes have accompanied almost daily protests against corruption, inadequate social systems and a lack of infrastructure. Eight people were injured (21.10.2013) outside the Windsor Hotel, where the bidding took place on Monday.

Indoors, everything was peaceful as the largest auction in Brazilian history moved along: There was only one bidder for oil production rights at the Libra field, about 200 kilometers off the Rio de Janeiro coast, which holds an estimated eight to 13 billion barrels of oil. 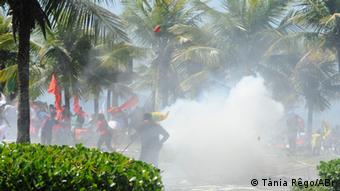 Oil regulator ANP had expected about 40 oil corporations from around the world to sign up for the auction, but in fact there never was a bidding contest at all.

After oil giants Exxon, Chevron and BP did not even pay the entrance fee, other interested parties bailed out as well. In the end, a single international consortium remained, consisting of Brazil's Petrobras with a 40 percent stake, Anglo-Dutch oil giant Royal Dutch Shell and France's Total with 20 percent each, and China's CNOOC and CNPC with a 10 percent stake each.

"The tender offer wasn't really an auction, it was more of a handover," Ildo Sauer, head of the University of Sao Paulo's Energy and Environment Institute (IEE), said. While the national energy agency appeared to be astonished by the cautious reaction, experts were less surprised. The Constitutional Court is currently examining the legal framework the production contracts are based on. Extraction conditions are considered difficult, as the fields are situated under a thick layer of salt 6,000 meters under the sea surface. In addition, it is not really clear how much oil the field holds. 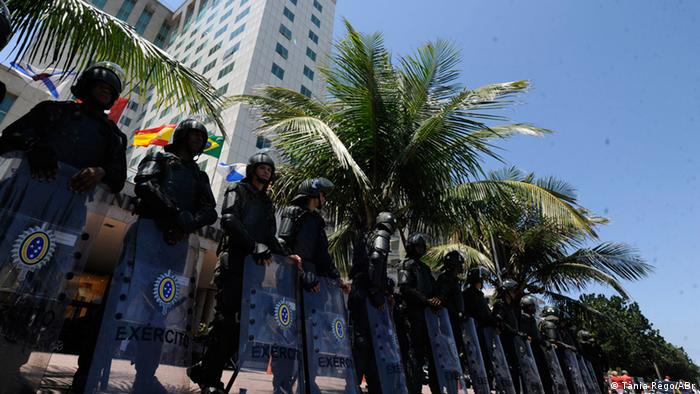 Protests against selling the country's natural resources to foreign companies

The lackluster response may also be due to Brazilian oil group Petrobas' role in the project. The semi-public company was always meant to have at least a 30 percent stake in the Libra production site. "As long as the government wants to have this much influence on the licences, it is no wonder it meets with little interest among private businesses, in particular foreign firms," Adriano Pires, Director of Brazil's Institute for Infrastructure (CBIE), says.

Petrobras also has liquidity problems. "The rating agencies are putting pressure on Petrobras," Marcos Antonio de Andrade, a trade expert at MacKenzie Presbyterian University in Sao Paulo, says. "That's a major problem for external investors." He said he would have expected the Chinese to show a greater commitment. China is, after all, Brazil's biggest trading partner and has huge oil needs.

Over the next 30 years, the licenses are expected to flush 330 billion euros ($451 billion) in fees into state coffers. IEE chief Ildo Sauer, energy director at Petrobas from 2003 to 2007, is convinced the government deprived the state of billions of dollars in oil revenue with its hasty procedure.

Sauer filed a total of 24 lawsuits seeking to block the Libra sale. To date, 18 have been quashed. "I still believe the judiciary will declare the auction invalid," Sauer told DW. "If it doesn't, October 21 will be remembered as a day of crime against the country."

Critics agree the bid was an election campaign maneuver by Brazilian President Dilma Rousseff: 75 percent of the state's oil revenue is earmarked for the education sector, and 25 percent for the health system, both major demands by protesters on the streets. The government plans to pad its current budget with a one-time, five-billion-euro license fee, Pires said: "One year ahead of presidential elections, the government is fighting for survival."

"In 2010, Dilma Rousseff called privatizing the pre-salt oil fields and Petrobas a crime," former Petrobas manager Ildo Sauer said. Rousseff is so unconvincing, he said, that she needs the military to push through the largest oil privatization in Brazilian history.

Chad's President Deby has no time for critics. Opponents are either silenced or bought off. Internationally, Deby scores points for the contribution by Chad's well-equipped army towards resolving regional conflicts. (09.10.2013)