The head of Germany's nationalist AfD has argued that the framers of the constitution had a post-War context that is no longer relevant. In a newspaper interview, she argued that is should not apply to Syrian refugees. 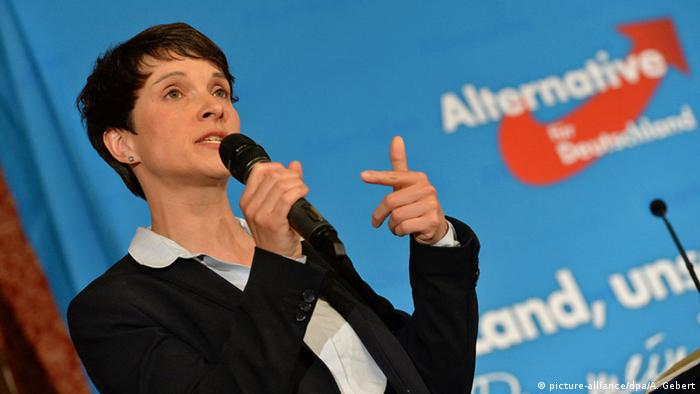 The AfD and FN leaders to meet in Koblenz

On Saturday, the head of the Alternative for Germany Frauke Petry and Marine LePen from France's National Front are to meet at a gathering of European right-wing parties. This is a controversial event within the AfD. (20.01.2017)

The German Statistics Office has released a report negating hopes that the refugee crisis might actually help the country's demographic decline. The country would need around half a million immigrants every year. (20.01.2016)

Frauke Petry, the leader of the right-wing Alternative for Germany, removed a candidate from the AfD's list in the 2014 Saxony elections. Now, two legal experts are saying the results of that vote should be voided. (15.10.2016)

"Persons persecuted on political grounds shall have the right of asylum," reads Article 16 of Germany's Basic Law, the constitution adopted in 1949 - seen by most Germans not only as the law of the land but as the country's bulwark against the return of dictatorship.

But now, Frauke Petry, leader of the right-wing Alternative for Germany (AfD) party, has said it's time to strike the right to asylum from the books. Petry's comments came in an interview with German newspaper Die Zeit, in which she was invited to lock horns with the Green party's Katrin Göring-Eckardt.

Petry told the newspaper that she did not believe the laws laid down in the 1940s should apply to refugees fleeing conflict in the Middle East and Africa.

"The many fathers and rather fewer mothers of our constitution were thinking about a very small group of people, in the context of who should bear the responsibility of the atrocities of the Second World War in post-war Germany." This right to asylum should not, therefore, carry the same weight for today's refugees.

The AfD has carved out a niche for itself in the German political landscape as the party with the most openly critical stance towards immigration and asylum - at least among those in a position to win seats. They have also officially adopted the policy that "Islam does not belong in Germany" to their party manifesto.

Green party: How we live forces people to flee

Göring-Eckardt, for her part, scoffed at what she saw as a self-servingly narrow interpretation of the Basic Law. She pointed out that now, as then, Germany was part of the root cause as to why people had to flee in the first place.

"Many waves of refugees came about because we live the way we live. People also flee because there are droughts, because there is no water where they are, because they cannot grow their own food anymore because they have to grow soy for our meat industry," said the Green politician.

In stark contrast to the AfD, the Green party believes that immigration, including of refugees, is key to solving the problems inherent with Germany's aging population and should be encouraged.