DW looks at the populist Alternative for Germany (AfD) party. It was founded in 2013 by euroskeptics, but began campaigning on an anti-immigration platform in 2015.

When it was formed in 2013, the AfD's main thrust was its opposition to bailouts of indebted European Union member states like Greece. But over time, it has become, first and foremost, an anti-immigration party.

The AfD has completely rejected former Chancellor Angela Merkel’s welcoming policy toward refugees, particularly from the Arab world, which saw more than 1.5 million migrants arrive in Germany since 2015. The party wants to change Germany’s constitution to get rid of the right to an individual hearing in asylum cases and would seek to immediately deport all those whose applications to remain in Germany are rejected, regardless of whether the countries to which deportees are sent back are safe or not. It also advocates for foreigners who commit crimes in Germany being sentenced to prisons outside the country and treating minors as young as 12 as adults for certain offenses. 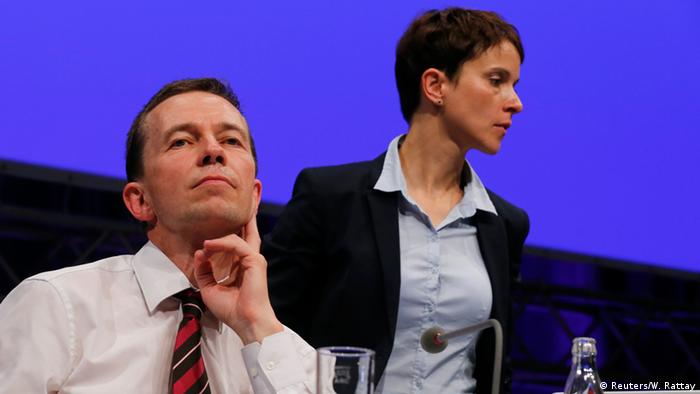 Bernd Lucke (l) was the party's founder and first chairperson, he was replaced by his co-chair Frauke Petry (r)

The AfD wants to seal the EU's borders, institute rigorous identity checks along Germany's national borders and set up holding camps abroad to prevent migrants from leaving for Germany in the first place. The party's lead candidate in the 2021 elections, Alice Weidel, has said the party wants to achieve "negative immigration" to Germany. It also argues that Germany is being "Islamified" and portrays itself as a bulwark for traditional Christian values.

The party is generally regarded as being split between "moderate" and "far-right" wings, the latter of which has gained ground since 2015, with shades of   racist nationalism and anti-Semitism.

From 2017 to 2019, the far-right faction was represented by co-chair Alexander Gauland. Born in 1941, Gauland was a lawyer and journalist and had been a member of the center-right Christian Democrats (CDU) for 40 years. He was also co-leader of the party's group in the Bundestag together with Alice Weidel, an economist who lives at least part-time in Switzerland with her female partner, who comes from Sri Lanka, and their two children. Over the years, Weidel has increasingly gained support form the nationalist wing of the party.

In May of 2021, ahead of the general election, AfD members gave a resounding victory to Alice Weidel and Tino Chrupalla as co-candidates for chancellor, which was seen as a victory for the party's radical fringe, who support the pair. Party co-leader Jörg Meuthen was pushed aside. The member of the European Parliament had been promoting more moderate lead candidates — a plan that failed miserably.

Meuthen, formerly one of the party's most familiar faces, left the AfD in January 2022.

In the general election on September 26, 2021, the AfD lost two percentage points from its 2017 result, winning just over 10% of the nationwide vote. With the CDU out of power, the AfD was no longer the largest opposition party in the Bundestag, robbing it of a high-profile role in parliamentary debates and potentially making it less visible in Germany's politics. 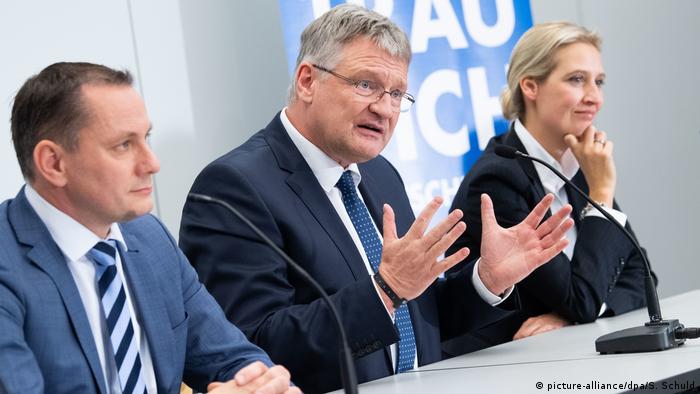 The AfD is most successful in Germany's eastern states in the former GDR. In the state of Saxony, for example, the AfD is polling at 26%.

In Germany's most populous western state of North Rhine-Westphalia, however, it has only 7% support.

Right-wing populism or a new home for neo-Nazism?

The AfD appeals both to the right-wing extremist fringe and to people dissatisfied with the status quo who may or may not have previously participated in the electoral system. Studies have suggested that the AfD has siphoned off supporters from all of Germany's established mainstream parties, and in 2021 it boasted more than 32,000 members. Many commentators saw the rise of the party as part of the same populist international trend that saw voters in the UK approve the Brexit referendum and Americans elect Donald Trump as president of the United States.

The official AfD platform says that the party supports direct democracy, separation of state powers, and the rule of law and order. But throughout its short history, critics have accused individual members, like the leader of the party's wing in the state of Thuringia, Björn Höcke, of promoting neo-Nazi ideas and using neo-Nazi language. Detractors say that the party follows a strategy of targeted breaks with anti-Nazi taboos in an attempt to appeal to right-wing extremists.

The AfD is often accused of pursuing a strategy whereby one of the far-right members breaks a social taboo with an outlandish, offensive statement only for a moderate member to qualify his or her colleague’s remarks. 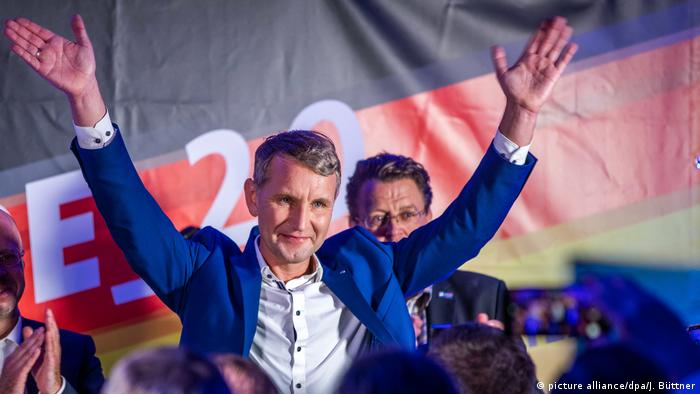 Björn Höcke, AfD leader in Thuringia is a strong voice of the party's extreme right wing

The rise of the AfD has, in any case, coincided with the decline of far-right parties like the NPD into virtual insignificance.

Family, Pegida, and the press

The AfD also sees itself as a defender of the traditional nuclear family model. It is anti-abortion and, despite Weidel's prominent role, hostile to what it calls "alternative" lifestyles. It favors a series of measures that would increase state financial support for what it perceives as "traditional families" and is, in this respect, not fiscally conservative.

Like former President Donald Trumpor populist leaders in eastern Europe, the leaders of the AfD display a conspicuous hostility toward the mainstream media. The AfD favors doing away with the licensing fees that underwrite Germany's public television and radio stations, and journalists are regularly excluded from party events. Reporters who call the press hotline at the party's headquarters to request information often get a pre-recorded message telling them to "try again later."

The conservatives responded by suspending Max Otte from the party until further notice. The parliamentarian heads a conservative fringe group within the CDU calling itself the "Values Union."

Germany's far-right AfD feels shunned by opponents in the Bundestag

In a large-scale raid, German police targeted dozens of individuals from the Reichsbürger scene who were suspected of planning a coup. What kind of movement is this — and what threat does it pose to democracy?