The conservatives responded by suspending Max Otte from the party until further notice. The parliamentarian heads a conservative fringe group within the CDU calling itself the "Values Union." 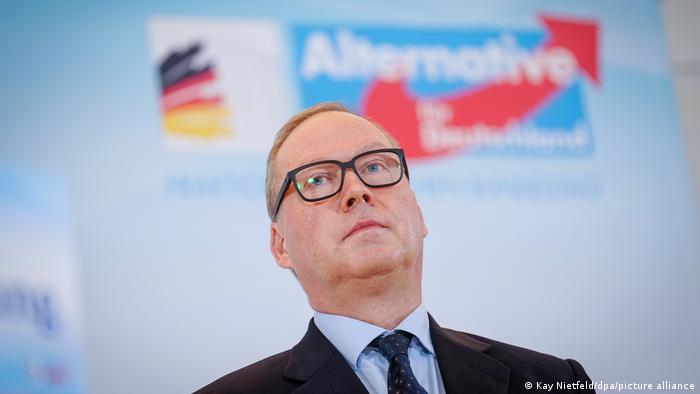 Unlike the mainstream of his party, Otte has not shied away from association with the AfD

Germany's center-right Christian Democratic Union (CDU) on Tuesday said it was suspending parliamentarian Max Otte after the far-right populist Alternative for Germany (AfD) said it would nominate Otte to become the country's next president.

The CDU made the decision at a party leadership meeting on Tuesday evening.

Weidel had called him an "honorable politician" and a "man of the center." Otte made it clear that he planned to accept the nomination and that he did not intend to voluntarily give up his CDU membership as the party had demanded." Ziemiak said on Tuesday evening that Otte's appearance at the press conference alongside AfD leadership amounted to a "breach of loyalty." Accepting the AfD's nomination also violated a 2018 CDU resolution to "in no way work together with the AfD," he added.

As a result, Ziemiak said the party would suspend Otte's membership with immediate effect and set in the motion the process required to formally expel him from the party.

"Whoever, as a Christian Democrat, accepts a nomination for the office of president from the AfD is violating the values of the CDU and has no place in our party," Ziemiak tweeted earlier.

What is the German presidency?

Otte's candidacy is considered an extreme long shot to replace incumbent Frank-Walter Steinemeier, in part because Germany's other parties have long refused any public showing of solidarity with the AfD.

Steinmeier is also backed by the three parties in Chancellor Olaf Scholz's government.

Otte's candidacy is awkward for the CDU on several fronts but primarily because it distances itself totally from the AfD.

Beyond that, not only has the party publicly supported Steinmeier, it is still finding its feet in the opposition after 16 years in power under Merkel.

Although Otte, a well-known economist and academic, is ostensibly a member of the CDU, he has been more open to cooperation with the AfD than the party mainstream, including taking a position at a think tank closely aligned with the populists.

Last year, Otte became the head of the "WerteUnion" or "Values Union," a group that describes itself as the more conservative wing of the CDU but does not have a formal relationship with the party.

CDU leaders have struggled in recent years to settle on an approach to the WerteUnion, which is politically marginal but has at times gained plenty of attention.

"Being nominated by the AfD as a candidate for the presidency is not an honor but a disgrace,'' outgoing CDU leader Armin Laschet wrote on Twitter. "Anyone who even considers this as a Christian Democrat damages the reputation of the Union, violates its values and has no place in the CDU.''