Germany′s far-right AfD feels shunned by opponents in the Bundestag | Germany | News and in-depth reporting from Berlin and beyond | DW | 16.12.2021

Germany's far-right AfD feels shunned by opponents in the Bundestag 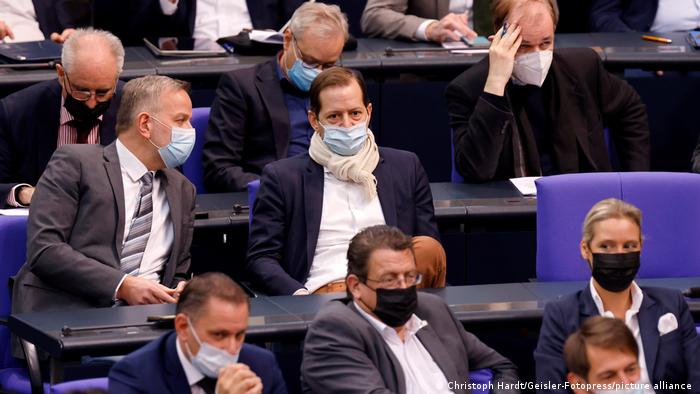 Germany's far-right populist Alternative for Germany party (AfD) is no longer the strongest opposition party, but it represents some 10% of the electorate. Some of its 82 parliamentarians have been put under surveillance by domestic intelligence agencies on suspicion of far-right extremism.

What role will the party play in the new legislative period? If the other parliamentary groups have it their way, it will be little to none.

Most recently, the other five parliamentary groups blocked the AfD's nominee for head of the powerful interior affairs committee. 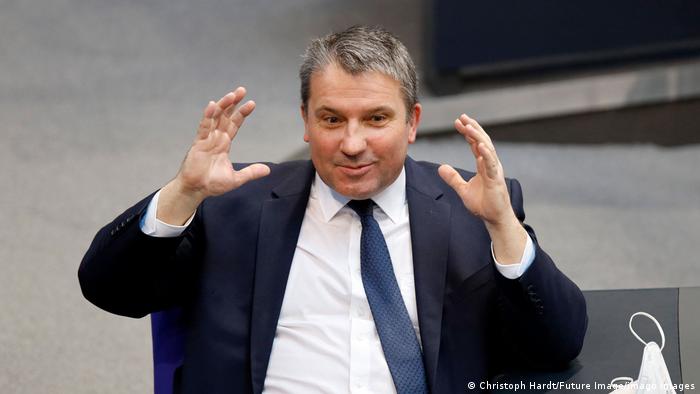 The interior affairs committee, which deals with questions of domestic security, policing and asylum policy, also has access to sensitive security information and is in close contact with security authorities, including domestic intelligence services.

The thought of the AfD's Martin Hess, a former police officer and hardliner from the party's far-right, taking over the chairmanship raised concerns among other parties in the Bundestag — and in the German media.

Ralph Brinkhaus, leader of the conservative CDU/CSU parliamentary group, told public broadcaster ZDF that he found it "questionable whether it was wise to have someone in that position who belongs to a party whose members are certainly on the fringes and beyond the fringes of our free democratic basic order."

When the other committee members rejected Hess via a secret ballot, AfD parliamentary group leader Timo Chrupalla cried: "systematic policy of exclusion." He was referring also to the AfD candidates for vice parliamentary speaker, who all failed to get the necessary majority.

A political scientist at the NRW School of governance, Isabelle Borucki, says the move is an attempt to show that there's a firewall against any efforts that are hostile to democracy.

"We're seeing more radicalization in our country right now. And for the other factions to shut out a party that has suspected links to such radicalized group is simply consistent," Borucki told DW.

Parliamentary committees are set up at the beginning of every term to assist the Bundestag in adopting new laws and amending existing legislation. The members discuss policy related to their specialized area and draw up recommendations that can serve as the groundwork for decisions made on the plenary floor.

Every MP is a member of at least one committee and each parliamentary group, starting with the largest, has the opportunity to choose which committees they want to lead. The selection process goes on for several rounds until all committee chairmanships have been dealt out. This time around, the AfD was able to pick interior, health and development.

The two AfD candidates for health and development also failed to win the required majority to chair their respective committees. A vote within the commission on who will chair the group is unusual, but possible if the committee members object to the nomination.

The previous legislative period saw a similar case in the legal affairs committee. In 2018, AfD MP Stephan Brandner was stripped of his role as committee chair in November 2019 after making comments on social media, which were widely condemned as anti-Semitic.

Kai Arzheimer, a political scientist at the University of Mainz, says the decision to prevent the AfD parliamentarians from chairing committees is another example of how the AfD's presence impacts the workings of parliament.

"Our institutions aren't really made for situations like this one," Arzheimer told DW. "They're made for constructive, collegial cooperation. And right now you have a party in the Bundestag which is raising concerns about whether they pose a security risk." 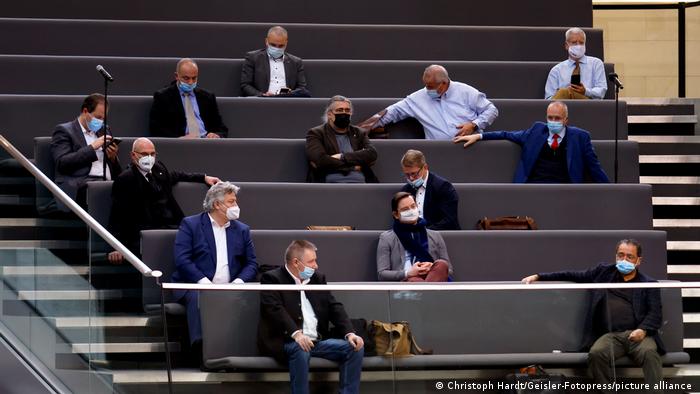 Since the AfD entered the Bundestag in 2017, they have set themselves apart from other parties: frequent hecklers, they don't shy away from loud, personal attacks. Several of them refuse to adhere to COVID regulations, which bars them from entering the plenary chamber and forces them to sit on the balcony during debates.

Lawmakers from other parties take pains to keep their distance and engage as little as possible.

In a move that wouldn't sound out of place in the school classroom, the Bundestag voted on Thursday to change the seating order: The neoliberal Free Democrats (FDP) got the go-ahead to move to the center of the plenary by swapping with the CDU/CSU who now find themselves forced to move to the right and sit next to the far-right AfD. 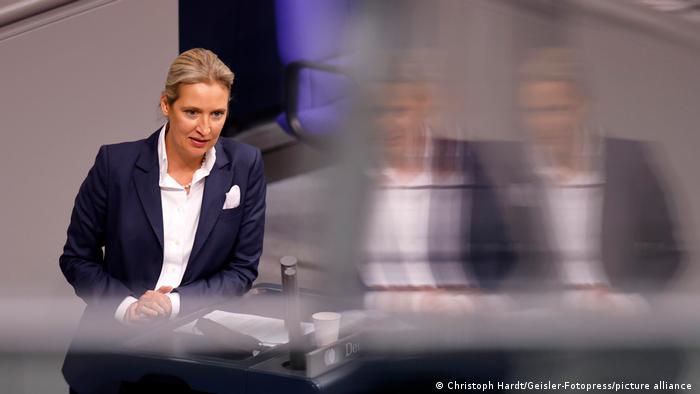 A harsher tone in Bundestag debates

The AfD's presence in parliament has also altered the style, as well as the substance of debates.

"Since the AfD has been in parliament, things have changed considerably: the tone of debates, how MPs speak to one another, and how they talk over each other more. There's often heckling from MPs too," says Borucki.

The shift in gear was clear from day one. In his first address to parliament in 2018, then AfD co-parliamentary group leader Alexander Gauland announced: "It's wonderful that we are here. We're going to hunt you."

AfD co-chair Alice Weidel is notorious for contemptuous and aggressive language and is regularly called to order by the parliament president.

"Burqas, girls in headscarves, knife-wielding men on government benefits and other good-for-nothing people are not going to ensure our prosperity, our economic growth, and our social welfare system," Weidel told parliament in a noteworthy speech in 2018, concluding her speech with the words: "This country is being governed by idiots."

Even the Bundestags' stenographers note a difference between "cheerfulness" in the Bundestag — which they consider expresses amusement — and aggressive "laughter", which is directed at against the other person. A project by German daily, the Süddeutsche Zeitung found that the AfD much more than any other party uses "laughter" as a targeted weapon against their opponents.

"Once upon a time, Bundestag commission members from different parties would go for drinks after spending the whole day together," remembers political analyst Kai Arzheimer.

"But that's no longer imaginable, because many of them think here's a party in parliament that rejects the institutions, that wants to radically change the country, and they can't work together with that."