Germany: Far-right AfD takes parliament to court over representation | Germany | News and in-depth reporting from Berlin and beyond | DW | 11.11.2021

All the major political parties are represented in the top-level Presidium of the Bundestag, Germany's parliament, except one: the far-right AfD. Is that fair, or democratic? Germany's top court is examining the case. 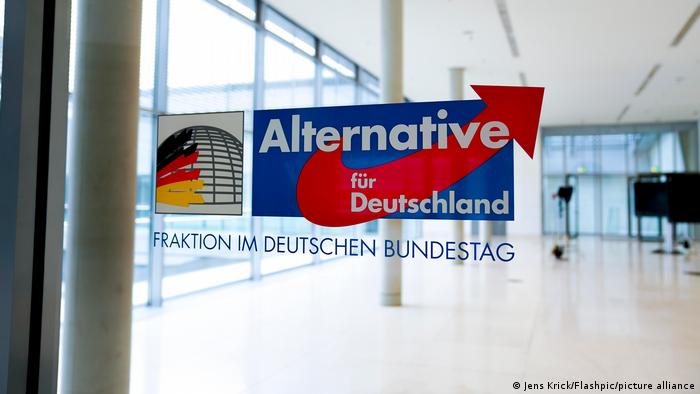 German Chancellor Angela Merkel is set to leave her caretaker role next month when a new coalition government is expected to take up the reins. Social Democratic (SPD) lawmaker Bärbel Bas will then be Germany's highest-ranking female politician, having been sworn in as parliamentary president, the country's third-highest office, in late October.

Her office as Bundestag president ranks just after the head of state and head of government, and is followed by the head of the Federal Council (Bundesrat) and president of the Federal Constitutional Court. These roles are generally split, in a power-sharing internal agreement, among members of the parties receiving the highest numbers of votes.

In theory, each party represented in parliament is also entitled to a post in the Bundestag Presidium. This quintet is at the head of the constitutional organs, which are an expression of the tripartite separation of powers: legislative, executive and judiciary. Together they form the foundation of democracy. That, in turn, is unthinkable without free elections.

New, diverse Bundestag gets to work

The appointment of an SPD politician — in this case, Bas — to the role of parliamentary president is due to her party emerging as the strongest political force in the Bundestag after September's federal election. Her party did not have a legal claim to the post, but traditionally someone is elected from the ranks of the largest parliamentary group.

Far-right AfD under surveillance for extremism

One of the most important tasks of the president is to lead the parliamentary sessions. She is supported by five deputies — chosen through a secret ballot process among the lawmakers — who together form the Bundestag Presidium. Each parliamentary group in the Bundestag is represented on the Presidium by at least one vice president. Or, at least, that was the usual model for decades — until the far-right Alternative for Germany (AfD) party was elected to the Bundestag for the first time in 2017. At each secret ballot, the AfD's candidates failed to get the necessary majority, because all other parties have uniformly rejected any cooperation with the far-right populists. The party is now also under domestic surveillance due to its continuing extremist tendencies, even after an extreme-right party faction was nominally dissolved last year.

But the refusal to work with a party legitimately elected by German voters presents a dilemma — one which touches on fundamental democratic questions. Each parliamentary group has an express right to be represented on the main parliamentary body, but the candidates must be elected by a majority of MPs — who follow their conscience, not any legal obligation, in making their choices.

Christian Pestalozza, a Berlin-based constitutional lawyer, told DW that he sees the Bundestag Presidium selection process as follows: "The parliamentary groups are entitled to a seat, but not to a person they choose receiving the seat."

What that can mean in practice is what the AfD has experienced in the last legislative period: The party put forward six candidates — one woman, five men — between 2017 and 2021. All failed. In order to enforce its supposed claim to a place in the Bundestag Presidium, the AfD submitted two urgent motions to the Federal Constitutional Court, hoping for a quick decision in its favor.

The Federal Constitutional Court rejected both urgent applications in August, on formal grounds, saying the new and generally applicable procedural law requested by the AfD for the Presidium election could not be decided upon via an emergency injunction. The party has made another attempt to address the matter through the courts, but no decision is expected until early 2022. AfD's Alice Weidel: 'Millions of voters are being excluded'

Pestalozza sees an urgent need for negotiations, independent of the outcome of the case.

The Bundestag Presidium cannot, in view of the rules about guaranteed seats, "refuse all the lawmakers from one specific party." Someone is going to have to accept the inevitable and vote for the AfD's candidate, he said, "but it could take a long way to get there."

The AfD already made it clear in September, when they were still leaders of the opposition, that the process was taking too long.

But it's still not looking good for them. AfD lawmaker Michael Kaufmann, whom they nominated as Bas' deputy, did not end up winning the post. Kaufmann called his defeat a "crashing failure" of democracy.

AfD party co-leader Alice Weidel said it wasn't only her party members that were being cut out of the picture, but also the "millions of voters who chose us and whom we represent in the Bundestag."

Kaufmann gave up his previous seat in Thuringia's state parliament when he won a direct mandate to enter the Bundestag. He then succeeded in doing what the AfD has thus far struggled to do: win the support of a lawmaker from another party. Bodo Ramelow, the leader of the socialist Left Party in Thuringia, who also now serves in the fourth-highest federal office — that of Federal Council (Bundesrat) chair, voted for Kaufmann as vice president of the Bundestag.

Ramelow was heavily criticized for the vote, but argued that he does not agree with the AfD's platform, nor does he have a particular affinity for Kaufmann. He simply believed that "every party has the right to participate in parliament" and that he was "respecting parliamentary rules."

Pestalozza said the Bundestag "would be ill-advised to reject a candidate without considering the person themselves just to make it clear that they don't like the AfD." At the same time, no one should "blindly" accept the candidate put in front of them, and that goes for all parties.

The AfD has made it clear that Kaufmann will run again to be Bas' deputy. Meanwhile, Pestalozza is looking toward the pending proceedings before Germany's top court. The Bundestag should at all costs avoid "leaving a seat empty, even until the end of the legislative period, for no concrete reason."

The court will now decide if the majority in the Bundestag "abused" its voting powers.