China's president has offered his support to Hong Kong's embattled leader following months of protests and violent clashes. The former British colony's economy has plunged during its worst political crisis in decades.

Hong Kong's activists: Behind the scenes

Xi praised Lam's leadership during these "most difficult times" after months of anti-government protests in the semi-autonomous Chinese territory.

"The situation in Hong Kong in 2019 was the most complex and difficult since its return to the motherland," Xi told reporters.

"The central government fully recognises the courage and assumption of responsibility you have displayed in these exceptional times in Hong Kong." 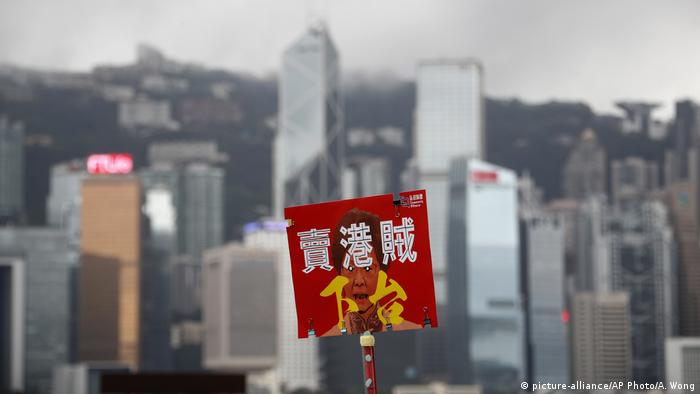 Protesters have targeted Hong Kong leader Carrie Lam, calling on her to step down

Speaking at a press conference with Hong Kong leader Carrie Lam in Beijing, Li said she had risen to the challenges. However, he placed the responsibility of safeguarding "the city's long-term prosperity and stability" on her government.

"Hong Kong has yet to come out from the difficulties," Li said in comments circulated by Hong Kong-based newspaper South China Morning Post.  "The city's government must continue to make efforts in stopping violence and ending chaos in accordance with the law, and restore order."

For months, protesters have taken to the streets of Hong Kong, disrupting commercial activity, establishing road blocks and occupying official buildings. What started as opposition to an extradition bill in June has since evolved into a movement calling for more democratic rights and further autonomy from mainland China.

Lam has been a crucial target of the demonstrations, with activists calling on her to step down and for authorities to investigate what they describe as widespread police brutality during crowd dispersal operations.

Although initial demonstrations remained peaceful, the protests have now become more violent due to clashes with police.

Hong Kong, a bustling commercial hub in the heart of Asia Pacific, has seen its economy dip into recession following the unrest.

Around 7,000 out of 64,000 licensed retail establishments have indicated they will likely close in the next six months if the economic downturn continues, according to the Hong Kong Retail Management Association.

The Hong Kong administration has vowed to free up $3.2 billion in stimulus to jump start the economy. However, observers believe the cash injection will do little to that effect if the unrest continues.

The move is a major setback for Hong Kong's government. The international experts were called in as part of a bid to address protesters' demands for an independent probe into police violence and misconduct. (11.12.2019)