Hong Kong: 'For the protesters, this is a kind of endgame'

The mayhem in the streets of Hong Kong has reached its universities. Political scientist Stephan Ortmann, who teaches at one of them, does not believe that there will be a peaceful solution to the conflict. 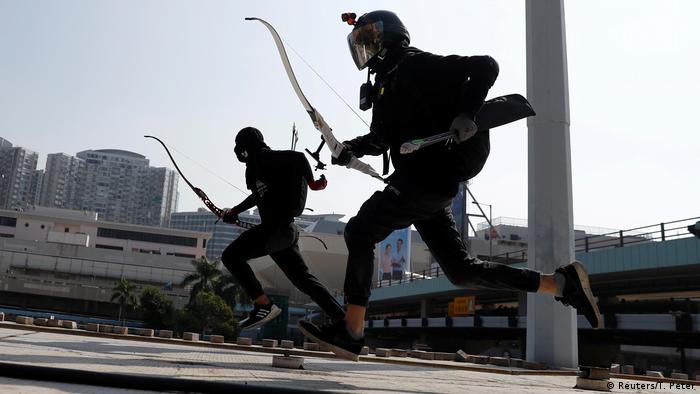 DW: This week, the protests have shifted to Hong Kong's universities. Some of them saw violent altercations between protesters and police. What's the situation at the City University, where you're teaching?

Stephan Ortmann: We, too, had altercations, namely on Monday morning. There's an app that was developed by protesters. It shows you what's happening right now, where police forces are in action. In the morning I noticed the letters "TG" coming up. I thought that stood for "tear gas." Later I was told by my friend that, before midday, they used tear gas a number of times. The skirmishes partially took place on a bridge situated between the student homes and the university buildings. Therefore, I was particularly shocked by the fact that the university had not issued a bulletin, or a warning. Later they warned us to stay away from the area, which I did. During the whole week, there were no classes, and now the term has been cut short. [Editor's note: The current term would normally have gone on for another two weeks.]

Read more: How much violence do we show as a media outlet?

Yesterday, I took a look at the situation at City University. The street was littered with bricks, buses were used as barricades, the university buildings were soiled with graffiti. One of the refectories and a bookstore were vandalized. The protesters have now barricaded themselves inside the dormitory. The rest of the campus can be accessed without problems, nothing's happening there.

Students had been involved in the protests before; however, the universities had not been the scene of rioting thus far. This changed in the wake of the death of 22-year-old student Alex Chow. From your point of view, are there any other reasons for the occupation of the universities?

I believe the reason behind it is that the government wanted to crack down harder on the protests. For some time, the police have been taking action quicker than before, which is why we often see the protests escalate more quickly. A general strike had been announced for Monday. Hong Kong, however, only has very weak labor union structures, which means that a general strike does not materialize unless you force people into it. Therefore protesters, predominantly students, went ahead early in the morning and set up barricades on main motorways and roads and tried to stop trains. The police, in turn, then took action against this.

According to reports, the universities that were affected have turned into veritable war zones. Students are allegedly stockpiling weapons and incendiary devices, and apparently they shot arrows at police. Police forces, in turn, used tear gas and rubber bullets. Some students have returned to mainland China, a Danish university recommends that its students abroad leave Hong Kong as well. Is the student protest violent, for the most part, and who is responsible for the escalation?

It is clear that the escalation is reciprocal. Thus far, the government has not addressed the most important issue fueling the whole protest movement: a sense of unfair behavior, a lack of understanding that people here are fighting for their freedom. I believe that this is a kind of end game for the protesters. Actually, they don't have a great deal of hope. What they're doing now is saying, "We'll fight to the end." This is why they're stockpiling weapons, in order to go through with the fight that is led by radical protesters. The majority, however, are probably not violent. There is only a small number of people who involve themselves in practical military training.

How do the universities position themselves in this struggle?

For a long time, the government has been demanding that the universities clamp down harder on the protesters. The protesters, in turn, want them to defend the students. Our president has more or less disappeared from the scene. As far as I understand, he is actually pro-government, but he doesn't want to use words to that effect. We did not, by the way, have permission to organize political events of any kind during this term. Our university administration has not made an attempt to act as mediator; it simply made sure it didn't get involved. If you ask me, this is not something that can work. They should indeed try and help set up a dialogue and proceed in both directions. But in principle I, as a person of Western origin, am just an outsider.

With the exception of scrapping the controversial extradition law, the Hong Kong government did not make any concessions to the protesters. Among other things, the protest movement demands impunity for the thousands of people who have been arrested so far, as well as setting up an independent commission which investigates police violence. Is there, from your point of view, still a chance to achieve a compromise between the two sides?

The simple answer is no. The first step in the right direction would be to remove Carrie Lam as government leader. On the other hand, there's hardly anyone left demanding she step down, because protesters believe a change would have no effect at all, regardless of who's in charge. I think setting up an independent commission would have released some of the tension by now. The government hopes that the protesters will run out of steam soon, but there's a sufficient number of students who are prepared to fight until the end. Therefore I believe that, if the government wants to put a stop to the riots by using force, it has to do so by crushing them violently. 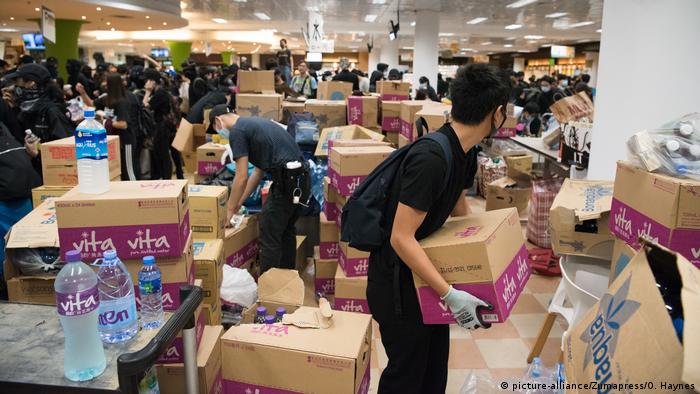 What do you think are the chances of a military intervention from China?

This is not very likely — otherwise they would have done it a long time ago. In addition, the cost involved would be extremely high. China needs Hong Kong, from an economic point of view. What's more, by resorting to a trick — declaring Hong Kong as foreign territory — many investments on the mainland have actually been made through Hong Kong. Nobody knows what the effect on the Chinese economy will be if Hong Kong's economy suddently slips into a crisis. For this reason I believe they will tread carefully. If they get involved it will be indirectly, for example by assisting the Hong Kong police.

Stephan Ortmann is an assistant professor in the Department of Asian and International Studies at the City University Hong Kong. He participated in several demonstrations taking place in the Chinese Special Administrative Region.

To the point - Protests across the Globe: Talking about a Revolution?