Opinion: How much violence do we show as a media outlet?

DW is committed to depicting reality, including its atrocious side. But where are our limits? When do we have to show violent images? DW correspondent and former editor-in-chief Ines Pohl on DW's guidelines. 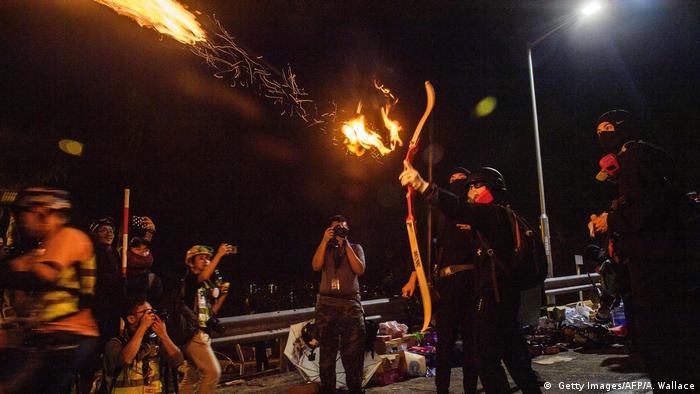 Staged for the media? A Hong Kong protester is filmed releasing a flaming arrow

Extreme acts of violence are shaking our world. Whether they're happening in Chile, Bolivia, Syria or Hong Kong — violence levels seem to be rising on a daily basis. In Hong Kong, for example, the ongoing skirmishes between protesters and police saw a distressing low point at the beginning of the week. On Monday morning, a police officer repeatedly fired live bullets at protesters, injuring one of them severely. Later that same day, a man who condemned the violent acts committed by radical protesters had a flammable liquid poured over him before he was set on fire. He sustained serious injuries. Video footage of the incident, filmed by numerous smartphones, was spread across the internet almost in real time.

Trying to "categorize" violence may be questionable. But those images of the burning man in particular are shocking, abhorrent and of almost unparalleled brutality.

We don't tamper with reality

We at DW, Germany's international broadcaster with services available across the world in 30 languages, are now discussing more intensively than ever before which images, which videos we are allowed to show. How much violence can we expect our audiences to put up with? Contemplating this, we also must bear in mind that we reach out to a variety of different cultures.

Which images are too disturbing and lack respect? When do we, through our reporting, redouble the pain of the victims by stripping them of their dignity (occasionally beyond their deaths)? On the other hand: When do we begin to distort reality by no longer showing what is actually happening?

These are difficult issues which we discuss constantly. Very often, decisions are made on a case-by-case basis because everything depends on the context at hand, on the symbolic power of snapshots which point far beyond the actual situation. The images of those unfortunate people who jumped from the burning Twin Towers on September 11, 2001 are proof of this.

We are making those decisions on the basis of our mission. Through our work, we want to facilitate independent opinion making. Consequently, we neither support individual political parties or other political associations, nor individual religious groups. As a matter of principle, we do not show cruel and inhuman acts of violence against people if they enunciate adulation or belittlement of such acts, or if they depict the cruel and inhuman aspects of the incident in a way that violates human dignity. And we've made it a stipulation that the victims of acts of violence must not, through our reporting, be victimized again by our coverage of their deaths or showing their exposure to serious bodily harm or emotional distress, either in the past or in the present.

There are exceptions, however — for example when there is a legitimate public interest in exactly this kind of presentation or coverage.

In the case of Hong Kong, we have decided to show both the images of the shot protester and those of the burning man, in order to enable our audience to form their own opinion on this extremely polarized conflict. With regard to the burning man, we decided against a video but published photographs. We published images of this mind-boggling incident because we neither can nor want to hide it. We did not, however, publish a video because we don't want to make the man's horrible suffering readily available time and again via moving images.

Those are decisions we do not take lightly, and we are not allowed to. And, to be sure, there are diverging opinions on the subject in our newsrooms, because we are aware of running the risk of abetting the perpetrators, who deliberately orchestrate acts of violence in front of their running smartphone cameras, always ready to publicize them worldwide via social media.

We have to assume that, in the future, there will be more of those challenges rather than fewer. And we, as journalists, must be very conscious of the possible danger of getting accustomed to horrible images to the extent that we regard them as something "normal."

Opinion: Australia's Big Tech crackdown is no model to emulate 23h ago