Two Germans have been detained during a police operation against protesters in Tuen Mun, a part of Hong Kong. They are receiving consular assistance. 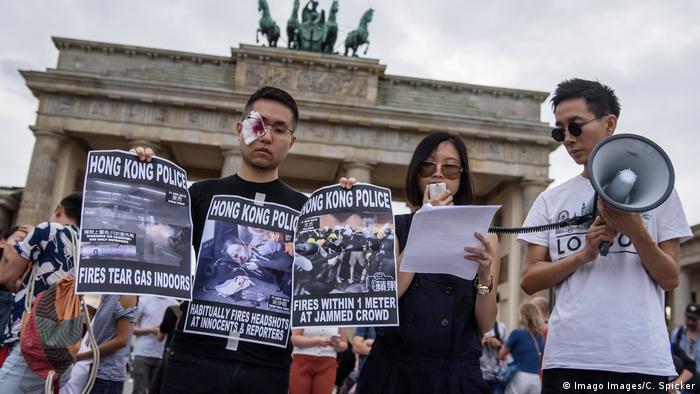 Two German citizens have been detained in Hong Kong amid protests and are receiving consular support, a source at the German Foreign Ministry said Friday.

"Our consulate in Hong Kong is providing assistance to two German nationals and is in contact with their lawyer as well as the authorities there," the Foreign Ministry source said.

Hong Kong authorities said they had detained two foreign men during what police there called a "dispersal operation" against a group of demonstrators gathered in Tuen Mun, news agency Reuters reported.

German newspaper Bild reported that the two individuals were exchange students at the Lingnan University in Hong Kong.

Dutch students urged to return to the Netherlands

Leading Dutch universities including Utrecht, Amsterdam, Leiden, Delft, and Rotterdam advised their students on Friday to urgently leave Hong Kong for security reasons, following the increase in violent unrest across the city.

Rotterdam's Erasmus Institute, for instance, advised students "to return to the Netherlands as soon as possible due to the current situation in Hong Kong." A total of 74 Erasmus students were in Hong Kong at the start of the semester, making up around a quarter of Dutch students there, although the university noted that some had already returned.

"The situation is worrying, it has degenerated and is unpredictable ... Students no longer feel safe and their families are worried," University of Amsterdam spokeswoman Annelies van Dijk told AFP, adding that the university was prepared to pay for flights home for its 40 students in Hong Kong.

More than 280 Dutch students are currently enrolled in Hong Kong education establishments, according to the Dutch public broadcaster NOS. Several Dutch universities are actively seeking to repatriate students who are Dutch nationals.