'Too late' for Hong Kong government to gain citizens' trust

Tensions in Hong Kong soared after the death of a student activist and the police's use of live rounds. DW talks to professor Ma Ngok from Hong Kong's Chinese University about the impact in the Chinese-ruled territory. 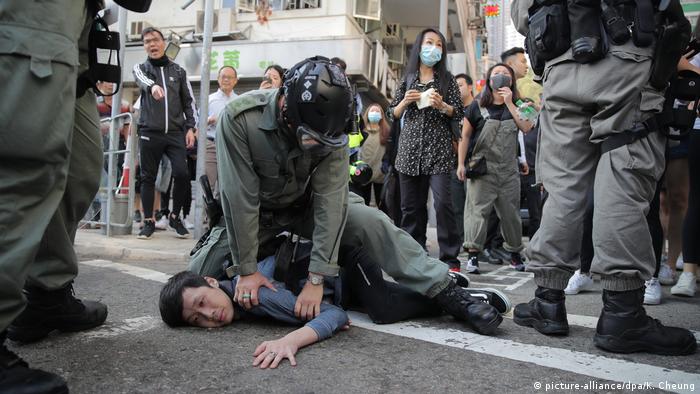 The death of a student activist in Hong Kong last week and the police's decision to fire live rounds at protesters on Monday has renewed anger among demonstrators.

DW spoke to professor Ma Ngok from Hong Kong's Chinese University about the aftermath of the recent incidents and whether the Hong Kong government can regain citizens' trust.

DW: Tension in Hong Kong has intensified once again following the death of a college student last Friday and police reportedly firing live rounds at protesters on Monday. How do you think this is going to impact the situation in Hong Kong?

Ma Ngok: The police's action of firing live rounds at protesters shows the recent trend of frontline police adopting more extreme measures against protesters during clashes. Because of the pressure on both sides, I think the situation in Hong Kong is getting more and more dangerous.

I think it's possible for violence to escalate and it could also lead to more widespread protests involving more violent measures. It is obvious that people can easily block streets or metro stations, and while they might start demonstrations peacefully, things can easily escalate into violent clashes with the police.

The important point is that Hong Kong's government seems to have done nothing since last Friday's tragic event, and they instead let the police handle the situation. I think such strategies have been proven ineffective for several months now. It only led to more clashes, further escalation of violence and more casualties. It is the government's responsibility to come out and offer political solutions.

But with the public's deep distrust in the government, how likely is it that what they propose can appease the public's anger?

I'm afraid that it is already too late, but I think people would still like to see some response from the government. It's been several hours since the shooting this morning, but I didn't see the government do anything to address the issue. Clashes between police and protesters continue to take place in different parts of the city.

Based on past experiences, I think the government usually comes out and condemns violence. It definitely didn't help to ease the tension. I think they need to clearly say what they are going to do in order to pacify the situation. They also need to find a way to ensure the public that the police can be controlled. I think a lot of the anger in recent months is aimed towards the fact that the police are out of control and the government is doing nothing to address the problem.

The police issued a statement to emphasize that individual officers are responsible for their actions and the police department didn't order frontline officers to randomly fire shots at protesters. How should we interpret this response?

I haven't seen the police propose concrete actions to show how they would address complaints from society. No police officer has been punished or investigated for their actions over the last five months, and if the police department thinks some officers have committed mistakes, they really need to do something to address the problem.

We are entering the sixth month of protests in Hong Kong and the chaotic situations continue. Do you think this is a new reality for Hong Kong?

This has been the crux of the issue because people think the government and police can do whatever they want without facing any consequences. This is what makes people angry and if this is not set straight, different forms of protests will continue. While things have calmed down a bit over the last few weeks, what the police have done since last week would likely bring new casualties and further provoke protesters.