The death of a student protester in Hong Kong has spurred on the protest movement and heightened anger at police. Following multiple memorials, fresh clashes broke out between pro-democracy demonstrators and police. 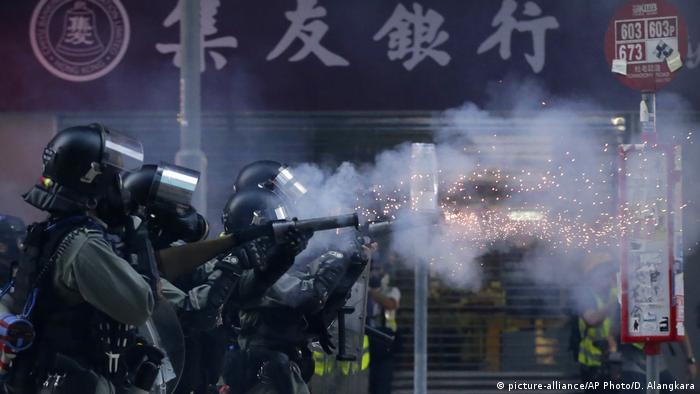 Multiple memorial events on Friday for a student who died from injuries sustained during protests in Hong Kong quickly morphed into widespread vandalism and clashes between pro-democracy protesters and police.

University student Chow Tsz-Lok fell from a parking garage on Monday after police fired tear gas at the building. He was pronounced dead at a hospital on Friday.

After news of the death broke, hundreds of masked protesters marched through the central district, chanting "Disband the police force," ''Hong Kong people, revenge" and "A blood debt must be paid in blood."

"His death is a reminder to us that we cannot give up," one protester said on local television.

Thousands attended memorial events in multiple locations, including at the garage where Chow fell.

There, and in other areas, groups of hardcore protesters blocked roads, set street fires and vandalized property. Police responded with tear gas.

The cause of the fall of the computer science student has not been determined, but his death has added fuel to a protest movement already enraged over police brutality.

Police denied claims the 22-year-old had been pushed to his death and that officials delayed emergency services. The government expressed "great sorrow and regret" over his death.

"The police have stated earlier that they attach great importance to the incident and the crime unit is now conducting a comprehensive investigation with a view to finding out what happened," authorities said in a statement.

Fatalities have been rare during the protests despite heavy-handed tactics from police and zealous actions by protesters.

The long-running protests were triggered by a now-shelved bill allowing extradition to mainland China, but have extended to demands for direct elections and an independent investigation into reported police brutality.

HK student activist Joey Siu tells DW's Conflict Zone: "It is the government that forces us to take on the streets and to break the laws." (06.11.2019)

Xi Jinping has said he "highly trusts" Carrie Lam's Hong Kong government as the city enters its 22nd week of protests. The Chinese president has called for Hong Kong to implement "one country, two systems" policies. (04.11.2019)