Hong Kong: Will violence kill the pro-democracy movement? | World | Breaking news and perspectives from around the globe | DW | 06.11.2019

HK student activist Joey Siu tells DW's Conflict Zone: "It is the government that forces us to take on the streets and to break the laws."

Democracy activist and HK student leader Joey Siu still believes the movement, born on the streets of the Chinese Special Administrative Region this summer, needs to continue with demonstrations. "It is the government that forces us to take on the streets and to break the laws," Siu told DW.

Clashes between demonstrators and police have turned increasingly violent.  In recent days, politicians such as the pro-Beijing lawmaker Junius Ho and others have been attacked.

Hong Kong’s pro-democracy activists, including Siu, so far have been unwilling to condemn the violence.

"One of the principals among the protesters is about no splitting and no condemning any of our protesters, even though the level of violence they use seems to be … escalating," she said.

"I believe the discussion about the future of Hong Kong or how the movement would go is ... mushrooming, especially in the recent days when we see that there has been an escalation of violence while we're not achieving anything ... Peaceful means will be the only way out for us to resolve the current situation in Hong Kong," Siu said.

Will the increase in violence from Hong Kong demonstrators erode the credibility of pro-democracy activists? 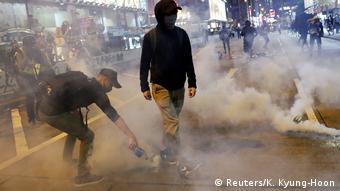 "The escalation of violence … will definitely be very concerning to the international society," the 20-year-old said.

Sebastian also pressed Siu on the targeting of police officers and their families by demonstrators: "I can't deny that it is actually happening, but still we're trying to use peaceful tactics to bring the situation to a resolution. And I believe bullying family members would not be a very good way to solve the situation."

Given the Hong Kong Bar Association’s condemnation of demonstrations that closed down Hong Kong’s airport as illegal, Tim Sebastian asked Siu whether she supported the rule of law.

"Of course I would like to live in a state of rule of law. However, we can see that it is very obvious that the situation of rule of law in Hong Kong is being broken not by the protesters but by the government itself first," she said.

Siu said she believed the people of Hong Kong continue to back the demonstrators, "Hong Kongers are still in support of the movement."

Will the violence lead to a Chinese crackdown in Hong Kong?

"I believe the majority of Hong Kongers would like to take the risk," if it meant there was the chance of a better future in Hong Kong, Siu said.

The demonstrations began earlier this year after the Hong Kong government sought to pass a new extradition law, which could have seen residents of the territory sent to mainland Chinese courts. That bill has since been withdrawn and yet the demonstrations have continued.

Sebastian pressed the young activist, asking if her movement could maintain international support if the continued violence resulted in the loss of life, "Your movement is finished then, isn't it," he asked.

Siu admitted it was unclear if activists could still control the situation, "I think the most important thing is about how we can hold our government accountable."

She suggested it was the Hong Kong police who were out of control.

"When we cannot hold the police accountable, when nobody can actually punish the police, how come the Hong Kong government could be charging our protesters with rioting even though they're only participating in some peaceful marches?"

"That is not reasonable," she added.

"We are asking for an independent commission of inquiry to investigate into police brutality."

Hong Kong police have used water cannon, tear gas and rubber bullets against demonstrators. Those measures have been criticized as excessive.

Siu, who has been the spokesperson since July for a collective of university student unions in the territory, defended the overall goal: "What matters most is … whether we can actually bring a change to our political structure and our government structure."

The student leader said the territory’s government could not be trusted, “The first criteria of having a sincere and meaningful dialogue would be the Hong Kong government itself trying to be sincere,” Siu said. 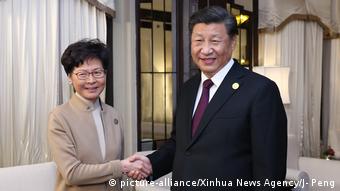 She also criticized Hong Kong’s chief executive: “Carrie Lam did not fulfill ... any of her promises.”

“What we are asking for is about the concrete actions by the Hong Kong government. We are asking them to respond to our demands by taking actual actions,” she added.

Sebastian asked Siu for the way forward and if protestors would agree to talks with the government.

“I believe nobody could represent our movement because, as you know, it is a leaderless,” she said.

Siu says students still want another demand fulfilled: “I believe asking for an amnesty would be the best solution.”

The student activist did not question Hong Kong’s status within China, but describes herself as being against, the Chinese Communist Party.

“After the handover of Hong Kong from the British … we can see that our core values, our judicial systems being encroached by the Chinese government.

She’s also calling for an extension of Hong Kong’s Basic Law which has governed the territory since it was returned to China in 1997. The agreement was supposed to allow Hong Kong wide-ranging autonomy and last 50 years.

The Hong Kong Electoral Affairs Commission said Joshua Wong's nomination was found to be "invalid." The 23-year-old activist said he was the only candidate who was barred from running. (29.10.2019)