Demonstrators rallied against what they say is an overly aggressive police response to their five months of anti-government marches. The protest was broken up by riot officers, who again used tear gas and water cannon. 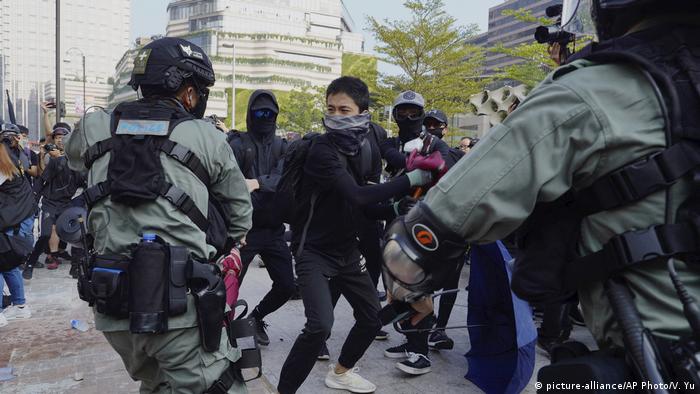 Hong Kong riot police on Sunday fired tear gas in an attempt to remove thousands of protesters who had gathered for an unapproved demonstration at the Kowloon harborfront to denounce perceived police brutality over months of unrest.

Many demonstrators were wearing the now banned face masks.

Police arrived at the demonstration site early and warned protesters to leave the tourist district of Tsim Sha Tsui, opposite the British colonial-era Peninsula Hotel.

The number of protesters had been growing by the minute as they streamed down Nathan Road to the water's edge, facing the dramatic skyline of Hong Kong island opposite, but many fled after the tear gas and pepper spray were fired.

Police detained some protesters as they gathered, many yelling profanities while police used loudhailers to warn others away.

The crowds at the waterfront had largely dispersed after a couple of hours, but several hard-line activists set fire to nearby shops and hurled petrol bombs.

In recent weeks, pro-democracy activists have attacked police with petrol bombs and rocks and slashed one officer in the neck with a knife.

The police deny accusations of brutality, saying they have shown restraint in life-threatening situations.

In the last few days, protests have not been as large or violent as previous demonstrations, but smaller "flash mob" protests have remained a near-daily phenomenon.

Protesters are angry about what they see as creeping Chinese interference in Hong Kong, a former British colony that returned to Chinese rule in 1997 under a "one country, two systems" formula intended to guarantee freedoms that are not enjoyed on the mainland.

China has denied meddling and has instead accused foreign governments, including the United States and Britain, of causing trouble.

Many protesters took a mocking approach to challenge a recent ban on masks at rallies. Chinese leader Xi Jinping, cartoon characters and Guy Fawkes were among those depicted by people forming a human chain. (18.10.2019)

Chan Tong-kai was released from a prison on Wednesday where he was serving a sentence for money laundering. Taiwan and Hong Kong authorities disagree about how he should return to Taiwan, where he is wanted for murder. (23.10.2019)

Hong Kong's embattled leader Carrie Lam was forced to abort her annual policy address amid chaotic scenes inside the city's legislature. She later delivered her speech via video. (16.10.2019)