Chan Tong-kai was released from a prison on Wednesday where he was serving a sentence for money laundering. Taiwan and Hong Kong authorities disagree about how he should return to Taiwan, where he is wanted for murder. 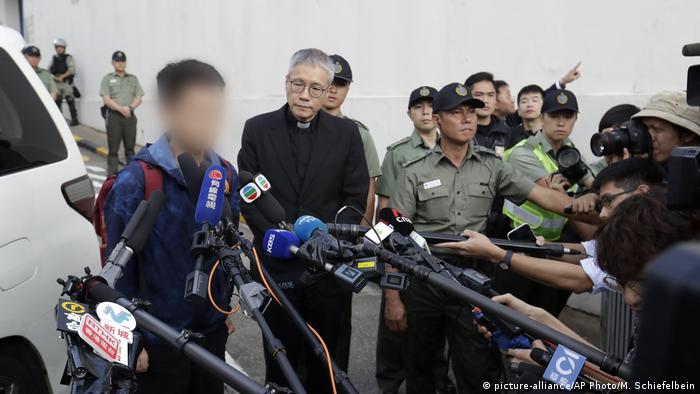 Upon leaving the prison on Wednesday, Hong Kong citizen Chan Tong-kai apologized to the family of his murdered ex-girlfriend and to the people of Hong Kong, saying he had made "a terrible mistake."

"I am willing, for my impulsive actions and things I did wrong, to surrender myself, to return to Taiwan to plead guilty and stand trial," he said. He did not specify when he would turn himself in.

Chan is wanted in Taiwan for allegedly murdering his ex-girlfriend while the pair where on vacation there last year.

Taiwan and Hong Kong have clashed over how to proceed with the case now that Chan is out of prison.

Hong Kong says Chan should be free to travel to Taiwan and turn himself in. But Taiwan says it is "unbelievable" that the suspect would be allowed to travel alone and that it would make Hong Kong "a criminal paradise where murderers can walk around."

It has asked for more cooperation from Hong Kong and the right to send its own officers to escort Chan. Hong Kong says that would be crossing legal jurisdictions.

Chan fled back to Hong Kong following his ex-girlfriend's death in Taiwan last year. He was able to remain due to the lack of extradition agreement between the semi-autonomous city and self-ruled Taiwan. In March 2018 he was arrested in Hong Kong, where he was held on a money laundering charge related to the murder case.

The case indirectly sparked months of mass protests in Hong Kong when Chief Executive Carrie Lam put forth a bill inspired by the case that would have made it easier to extradite criminal suspects to China, Taiwan, and Macau.

Lam has announced she would drop the bill and the government will formally withdraw it on Wednesday. Protests have continued, however, and expanded to include greater demands, including more oversight for the police.

Coronavirus: Most Germans support stricter controls for New Year's, but not Christmas 0m ago

Vienna: Iraqi jailed for life over attacks on German ICE trains 9m ago