Protests are continuing in Hong Kong after a night of violence. Authorities are targeting security at university campuses, where many of the clashes with protesters took place. 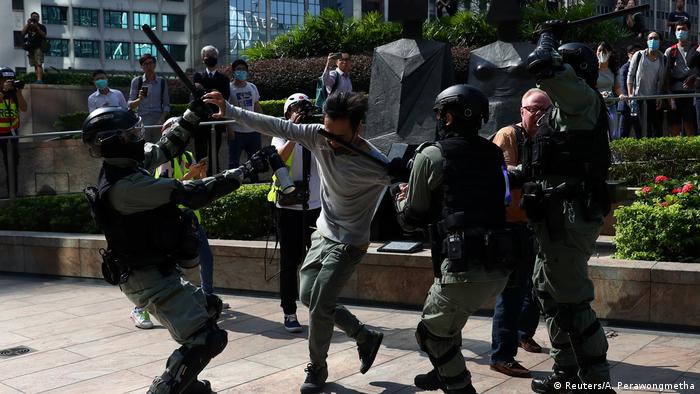 Authorities raised security levels on Wednesday around Hong Kong after a night of renewed violence.

Many of the clashes took place at university campuses, with a large number of students joining the anti-government protests, despite Chief Executive Carrie Lam urging students to obey the law.

Police confirmed on Wednesday that they had carried out a raid on the university campus amid fears that gasoline bombs were being produced there. "Nowhere in Hong Kong is a lawless land," said police spokesman Tse Chun-chung.

Protesters stepped up their "blossom everywhere" campaign of road blocks and vandalism in an attempt to bring the city to its knees. During the Wednesday lunchtime rush hour over 1,000 demonstrators blocked roads in the heart of the city's financial district. Many wore face masks in defiance of an ongoing ban.

Scores of riot police tried to disperse the crowds, beating some people. One police spokesman warned that the city was on the "brink of a total breakdown."

Hong Kong Hospital Authority estimated on Wednesday morning that 81 people were injured in the preceding 24 hours. A man shot by police on Monday and another man set on fire by protesters both remain in critical condition. 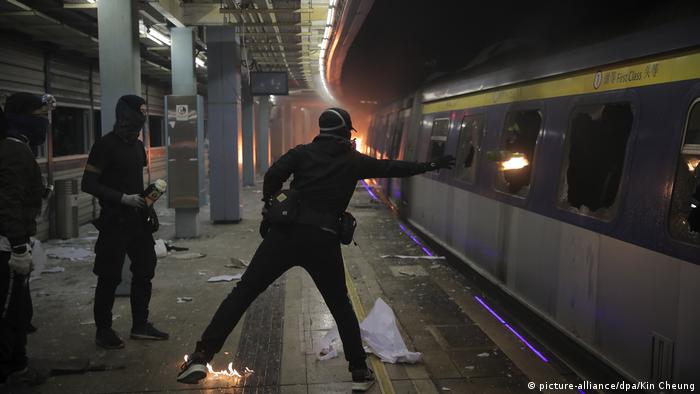 Police also used force to gain control of a bridge from which protesters were dropping objects onto a road below.

"The police have a duty to ensure public safety is maintained," Security Secretary John Lee told reporters. "That's why we had to take charge of the bridge formerly controlled by the protesters."

University classes were suspended on Wednesday while parents were advised that they could keep their children at home. The Education Bureau plans to shut all schools on Thursday for safety reasons and many financial institutions asked their staff to work from home.

Many mainland China students have fled violence in Hong Kong to take advantage of a program that offers them free temporary accommodation in the mainland city of Shenzhen.

Hong Kong police said they helped a group of Chinese students leave campus on Wednesday after it was barricaded by protesters.

Denmark and Norway urged students from their countries who study in Hong Kong to leave the city as soon as possible.

The events of the last few days have been among the most bloody since protests began in June. Protests originally began in opposition of an unpopular Chinese extradition law which was later overturned.

Protesters have since taken to the streets to express their dissatisfaction with the Hong Kong system of government as a whole.