In many EU countries, right-wing populists are benefiting from the unsolved migration problems. A European solution is becoming increasingly difficult, and countries are starting to go it alone. 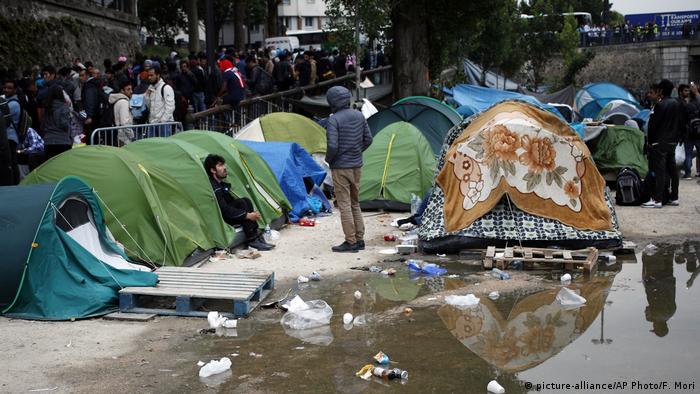 In the Belgian capital, where European Union bodies have been trying for years to negotiate a European solution regarding the reception and distribution of asylum seekers and migrants, you don't need to look far to find the consequences of migration.

The Belgian asylum authority at Brussels-North station is only a few kilometers from the EU headquarters. There are often migrants queuing up there, either to file an asylum application or because they want to travel on to Britain as fast as possible via France. Many of the Africans who stay overnight at the station or in nearby Maximilian Park will tell you they came from Italy; they traveled to Brussels by bus, car or train through Austria, Germany or France, in violation of the Dublin Regulation. According to this EU ruling, they are supposed to apply for asylum in Italy. The system the EU has been trying in vain to reform is not working.

The Belgian interior minister, Jan Jambon of the nationalist-conservative party N-VA, realized this long ago. He wants to take tougher action against migrants who are in Belgium without authorization. In May there was a tragic incident in which Belgian police fired on a vehicle carrying migrants from Iraq, killing a 2-year-old girl. The populist N-VA made strong gains in the last election in 2014, becoming part of a ruling coalition for the first time.

Rise of anti-immigration parties in the EU

Belgium represents a general trend across Europe. The "refugee" or "migration" crisis has led to the rise of strong right-wing populist opposition parties in many EU states, such as France, the Netherlands, Denmark, Sweden and Germany. In some countries, such as Belgium, Finland, Austria and Greece, right-wing populists are coalition partners in government. And a number of EU states — Poland, Hungary, the Czech Republic and, most recently, Italy — are governed solely by populist parties.

For Stefan Lehne, a Europe expert at the Carnegie Foundation in Brussels, it is clear that the migration crisis is part of the populist parties' business model. "They've found a subject that provokes strong emotions and is extremely polarizing, and they're not letting that subject drop," Lehne told DW.

Alexander Gauland, the co-leader of Germany's right-wing populist parliamentary group, Alternative for Germany (AfD), once described the influx of refugees, which peaked in 2015, as a "gift" to his party. The AfD is the largest opposition party in the German Bundestag; surveys show it ranking first in some eastern German regions.

'EU on the edge of the abyss'

Frans Timmermans, vice president of the European Commission in Brussels, worries that the strength of the right-wing populists and the unresolved migration issue are not only leading to a government crisis in Germany but are also endangering EU cohesion.

"Looking at the past few years, it's the issue of migration that has brought the EU to the edge of the abyss. Migration plays a key role in every member state, no matter which," Timmermans told the European Parliament last Tuesday. He is, of course, calling on them to set aside national interests and show solidarity. "Only at the European level can there be a comprehensive solution that works," he said.

But Lehne believes that many right-wing populist-influenced governments no longer see this as the case. "The EU's initial inability to deal with the issue has resulted in renationalization. Most populists, most parties that are hostile to migrants are also hostile to the EU. That is why more and more use is being made of national measures, border controls, the building of fences and the introduction of caps. Attempts to move forward on this at a European level have become very difficult in this political environment."

That is why the German chancellor's hope that she will be able to negotiate a solution before the EU summit at the end of June is probably an illusion. Nonetheless, in a talk show on German television, she stressed that, "If Europe cannot do this, Europe is in danger."

Angela Merkel is arguing in favor of coordinated action, bilateral agreements between EU states and, ultimately, for a European asylum authority to take decisions at the EU's common external borders. The chancellor says that, despite the strong right-wing populist trend, the EU needs to answer the following questions: "Are we powerful enough to create development in the places people are coming from, on the African continent? Are we better able now than we have been to end the civil war in Syria, where millions of people are still displaced and fleeing? Are we doing more to support refugee camps close to the refugees' homeland? No one makes the decision to leave their homeland lightly. So are we also able to have the same procedures [across Europe]?"

The oppositions both in Berlin and in certain other EU member states, such as Hungary or Poland, continue to accuse the German chancellor of making a grave mistake when she took in more than a million asylum seekers in 2015. In March, the AfD's Gauland said in the Bundestag that Merkel must now bear the consequences: "No one in Europe wants to bear the consequences of this policy. The Poles, Hungarians, Czechs and Slovaks are right to say: It's nothing to do with us if Frau Merkel brings people to Germany. We didn't issue the invitation. These people and their statesmen are in the right."

Since 2015, the number of people arriving in Greece and Italy, and in Germany, too, has dropped sharply, by around 75 percent. Migration policy has changed, yet populist parties and governments are still giving the impression that the borders are being overrun. Why is this? Lehne offers this explanation: "Clearly it takes some time for a traumatic shock like that of 2015 really to have a political effect. The effect clearly continues for months and years afterwards. The uncertainty this creates, which is then instrumentalized by interested groups, persists."

Some answers have already been provided to questions that are currently being debated in Europe and within Germany. Seven countries, including Germany and Belgium, have re-introduced border controls at specific points. For some time now, migrants have been turned back at the borders between France and Italy, between Belgium and France, and also between Germany and Austria. But although the numbers arriving are very low, people have the impression that migration is out of control, says Lehne. "There's an extraordinary focus on this subject. I think most people in Austria or Germany are hardly directly affected at all by the presence of refugees or migrants, but the media's concentration on this topic makes it incredibly virulent in society."

The ship Aquarius, carrying over a hundred migrants rescued at sea, has reached Spain after being rejected by Italy. The case highlights rifts in the EU over how to deal with huge numbers of people fleeing to Europe. (17.06.2018)

The German novelist and 1929 Nobel Prize in Literature laureate moved to the US during WWII. He was however frustrated by how the country developed under McCarthy — and his observations echo today's political situation. (18.06.2018)