Populist thinkers tend to be suspicious of the media. That is one of the findings of a Pew Research Center study conducted in eight western European countries. The researchers' methodology raises questions. 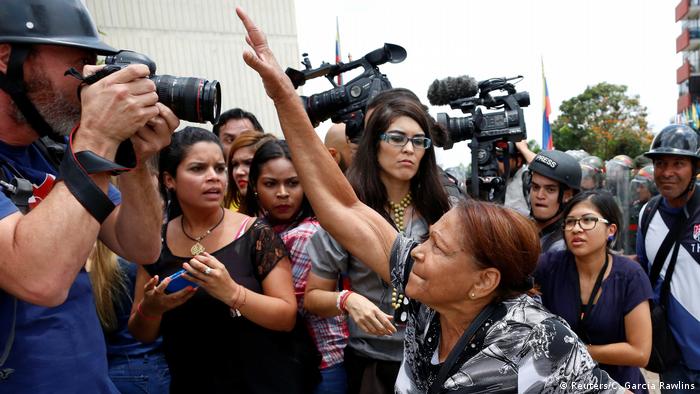 How well do media outlets work and just how trustworthy are they? The Pew Research Center, a US think tank, has published a new study featuring the results of polling conducted with citizens in eight western European countries and concludes: Adherence to traditional left-right thinking is less of a determining factor as to how people view media outlets than a growing tendency toward populist sentiment.

The study's results suggest varying intensities of identification with populist sentiment in the countries in which it was conducted: Denmark, France, Germany, Italy, the Netherlands, Spain, Sweden, and the United Kingdom. The study found: "People with populist sentiments in the eight countries surveyed trust media outlets between eight and 31 percent less than those people with other political views."

Pew found polling results for Germany — where mistrust of the media among populists seems exceedingly great (see chart) — conspicuous: "Whereas 78 percent of non-populists voiced a general trust in media outlets, trust among populists was barely 47 percent." Moreover, respondents in the latter group had an especially low level of trust when asked about reporting on the topics of immigration, business and crime. That means that populists in Germany are 30 percent more likely than other groups to take a critical view of the quality of reporting on immigration and crime. 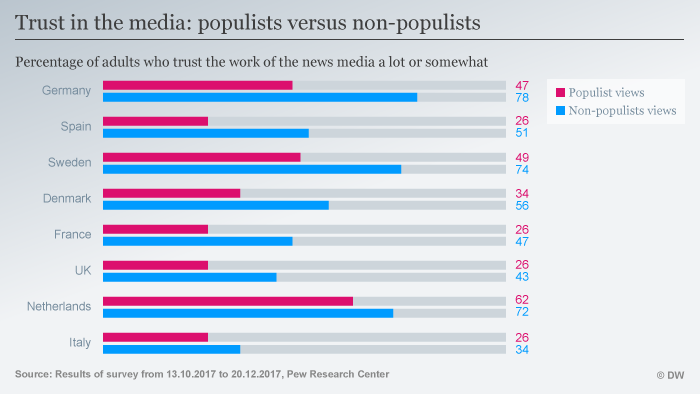 Crisis of trust in Spain, Italy, France and the UK

Trust in the media is increasingly rare in Spain, Italy, France and the United Kingdom as well (see chart below). Nevertheless, those respondents determined by Pew to be populists were shown to have at least some trust in traditional media outlets and still valued them as a source for news. The study's results stemmed from polling conducted between October 30 and December 20, 2017. The study was based on some 16,000 responses from the eight countries.

In order to differentiate between populist and non-populist replies the study used a division often employed by populist movements: That between "normal citizens" and the "political elite." The more expressly a respondent stressed that differentiation, the more solidly the study assigned them to the group exhibiting populist sentiments. "Those who claimed that elected officials are not interested in the needs of everyday citizens and assume that citizens would craft better policies than professional politicians were categorized as populists in the study," according to Pew. 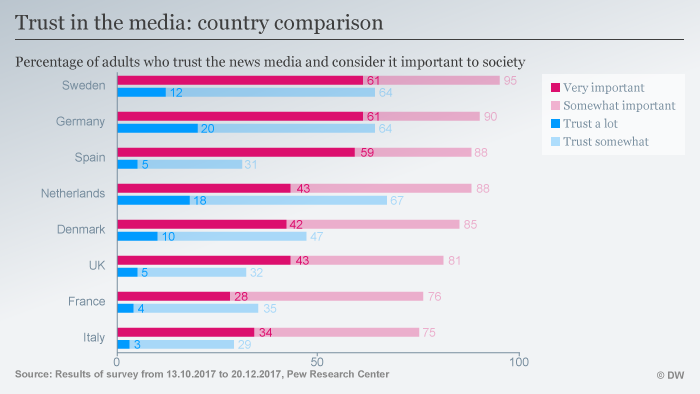 Right-left thinking on the decline

The study was intended to identify trends and social changes, and it would seem that it has. Previously, politics and media coverage in Europe had been clearly marked by classic ideological divisions between the left and right poles of the political spectrum. Trust in the media was also largely based along such political fault lines.

But this recent study suggests that traditional dividing line no longer exists. Although those old divisions continue to play a role in Spain, Germany and Sweden in respect to trust in the media (see chart), in the remaining countries that left-right split barely exists. 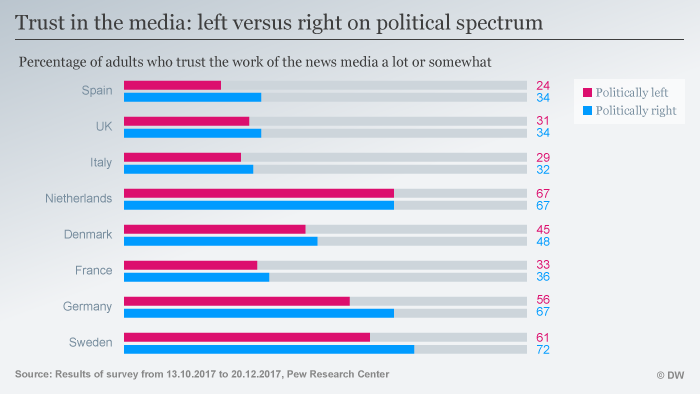 If one accepts the study's findings, then it is this group of populist users, more than any other, which sees ever less value in the media as being relevant for democratic society. The study claims to have registered that loss of importance in seven of the eight countries in which the poll was conducted.

The study also established that despite raging criticism of traditional media outlets, citizens who hold populist sentiments, nevertheless, continue to access conventional media outlets as a main source of information. The study found that to be the case in Sweden, Germany, Spain, the UK and the Netherlands. 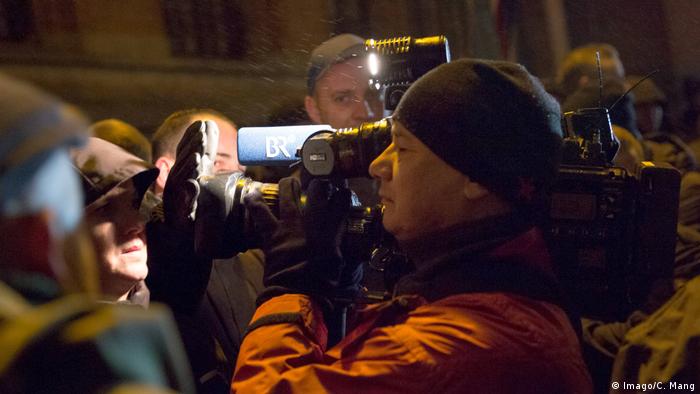 'Populists' may be critical of traditional media, but they still refer to it

Still, the Washington-based think tank left a number of questions unanswered. For instance, Pew did not sufficiently explain why it chose these eight western European countries to investigate the rise of populism as a social phenomenon. It is unclear whether this selective choice of nations skewed the results of the study.

That lack of clarity, in turn, raises doubts about the validity of the findings –not the first time such doubts have been raised about a Pew study. In the fall of 2017, Pew published a study on immigration and population that garnered much attention in Europe. The premises and assumption upon which the researchers based their study was highly criticized at the time of its release. Immigration experts criticized Pew for what they called the use of "populist" assumptions.

Thus, it remains to be seen whether the methodology behind dividing respondents into populist and non-populist groups will hold up as valid.

The US think tank describes itself as a non-partisan, non-profit organization, financed by the Pew Charitable Trusts. The foundation was created by the children of Joseph Newton Pew, the founder of the Sunoco oil company, in 1948.

Underrepresented, underfunded and led by foreign sets of standards and ideas — that's how international media often portrays Africa. Could social media give Africa the voice denied by international media? Listen to this week’s edition of The 77 Percent to find out.