Calls are growing from the international community for jailed Kremlin critic Alexei Navalny to be freed. Germany says it can't rule out further sanctions against Russia. 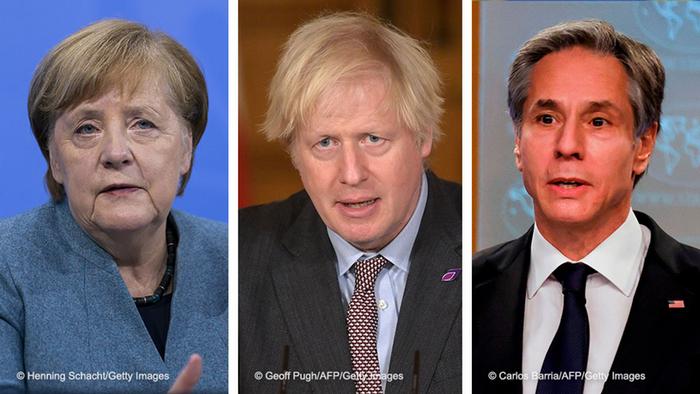 Germany, the UK and US have all criticized Navalny's prison sentence

The list of voices from the international community demanding an immediate release of Russian opposition leader Alexei Navalny continued to grow on Wednesday.

On Tuesday, Navalny was sentenced to 3 1/2 years in a penal colony for violating probation terms relating to a 2014 embezzlement case.

He will serve two years and eight months due to time already spent under house arrest. The outspoken Kremlin critic called the trial an attempt to "intimidate" the public.

UN human rights spokeswoman Ravina Shamdasani said on Wednesday that her office was "deeply dismayed" that Navalny was sentence over a case that the European Court of Human Rights in 2017 had "unanimously found" to be "arbitrary, unfair and manifestly unreasonable."

"We urge the authorities in Russia to immediately release all those detained for exercising their right to freedom of peaceful assembly and expression yesterday and over the past few weeks of protests across the country," she added in a statement.

"We call for Mr Navalny's immediate and unconditional release," she said in a statement.

Payne also raised concerns over the Kremlin's treatment of peaceful protesters and journalists.

German Chancellor Angela Merkel criticized the court's decision as lawless and demanded an end to violence against peaceful protesters in Russia.

"The verdict against Alexei Navalny is far from any rule of law standards. Navalny must be released at once," Merkel was quoted as saying in a tweet by her spokesman.

"Violence against peaceful demonstrators must stop," she stressed.

German Foreign Minister Heiko Maas called the ruling a "bitter blow against fundamental freedoms and the rule of law in Russia."

The German government said on Wednesday further sanctions against Russia cannot be ruled out.

In a tweet, British Prime Minister Boris Johnson also called for Navalny's release and dubbed the ruling as "pure cowardice", adding that it failed to meet "the most basic standards of justice."

British Foreign Secretary Dominic Raab issued a statement saying that the "perverse ruling, targeting the victim of a poisoning rather than those responsible, shows Russia is failing to meet the most basic commitments expected of any responsible member of the international community."

"A political disagreement is never a crime. We call for his immediate release. The respect for human rights such as democratic freedom are not negotiable," he said.

European Council President Charles Michel said that the EU will not accept the ruling.

"We do not accept his sentence — justice must not be politicized. Protesters have the right to demonstrate peacefully and voice their political views," Michel said on Twitter.

US Secretary of State Antony Blinken urged Russia to release Navalny and his supporters.

"We reiterate our call for the Russian government to immediately and unconditionally release Mr. Navalny, as well as the hundreds of other Russian citizens wrongfully detained in recent weeks for exercising their rights, including the rights to freedom of expression and of peaceful assembly," he said.

Russia lashes out at criticism

In a statement to RBC news channel, Russian Foreign Ministry spokesperson Maria Zakharova, issued a scathing response to the growing international criticism by asking countries to not meddle in the Kremlin's internal affairs.

"For the last few weeks we have been in a state of comments. And responses to similar attacks and statements," she said. "You should not interfere in the internal affairs of a sovereign state. And we recommend that everyone deal with their own problems ... There are a lot of problems in these countries, there is work to be done."

Kremlin spokesman Dmitry Peskov said Wednesday that "the holding of unauthorized rallies raises concerns and justifies the tough actions of the police."

"The police reaction was due to the threats that could have arisen from staging such a protest," said Peskov. "The provocations comprise of the fact that there were calls yesterday for unsanctioned protests."