A Russian court has sentenced Kremlin critic Alexei Navalny to 3 1/2 years in a penal colony for violating probation terms. Navalny has slammed the trial as a bid to "intimidate" the public. 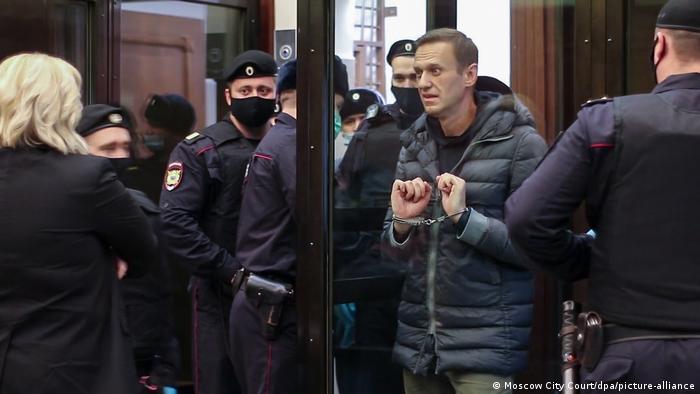 Navalny was arrested on January 17 as he returned from Germany

Russian dissident Alexei Navalny was sentenced to 3 1/2 years in a penal colony after a Moscow court found him guilty of disobeying the terms of his probation over the 2014 money laundering case.

In the Tuesday ruling, however, the court also took into account the time Navalny had spent under house arrest, meaning that the Kremlin critic would spend only two years and eight months behind bars.

Navalny rejected the claims of violating parole and slammed the process as an attempt to silence him.

During the hearing, Navalny said his trial was aimed at making people afraid. He blamed the charges against him on Russian President Vladimir Putin.

"This is how it works — they imprison one man, as a means to intimidate millions of people," Navalny said.

"First arrests being reported at Manezhnaya Square — the spot where Navalny’s team announced spontaneous protests against his prison sentence," she wrote on Twitter.

The opposition leader labeled Putin as "Vladimir, the underpants poisoner" during the hearing. According to Navalny's research into his own poisoning, a "hit squad" deployed by the country's main intelligence agency FSB tried to kill him by putting a Novichok nerve agent on his underwear. Navalny fell ill after boarding a flight in Siberia. He was then hospitalized in Russia and eventually flown to Germany for treatment.

"We have proven that Putin committed this attempted murder," he said on Tuesday.

The Kremlin has denied the poisoning allegations from Navalny.

The government critic encouraged Russians to resist Putin’s government, saying the Kremlin has stolen the aspirations of the Russian people.

US Secretary of State Antony Blinken said he was “deeply concerned" by Russia’s decision to sentence Navalny to prison and urged the Kremlin to release him "unconditionally and immediately."

"Today's verdict against Alexei Navalny is a bitter blow against fundamental freedoms and the rule of law in Russia," German Foreign Minister Heiko Maas said, adding that Navalny must be released immediately.

"Today’s perverse ruling, targeting the victim of a poisoning rather than those responsible, shows Russia is failing to meet the most basic commitments expected of any responsible member of the international community," UK Foreign Minister Dominic Raab said in a statement. He urged the Russian authorities to release not only Navalny, but all peaceful demonstrators and journalists that were arrested over the past two weeks.

Security forces were deployed in force outside the court building, where riot police were seen hauling protesters off. The OVD-Info monitoring group reported hundreds of people were detained.

Outside a nearby metro station, large numbers of police minivans awaited new detainees and police officers randomly searched people coming out of the metro.

DW correspondent Emily Sherwin said those arrested had been peaceful.

One young protester told DW: "I believe that people should be free to their opinion and that Navalny should be free. And I want to live in a country where money is used for charity and for the people and not for our president because it’s just unfair."

Another protester Sophia, 19, told was there with two friends. She told DW that despite the arrests, she shouldn’t be afraid, just like Navalny wasn’t afraid to come back to Russia.

"I came here because I want to support political prisoner Alexei Navalny. I think that lawlessness is taking place in Russia at (high) levels and I really want it to stop," she said. 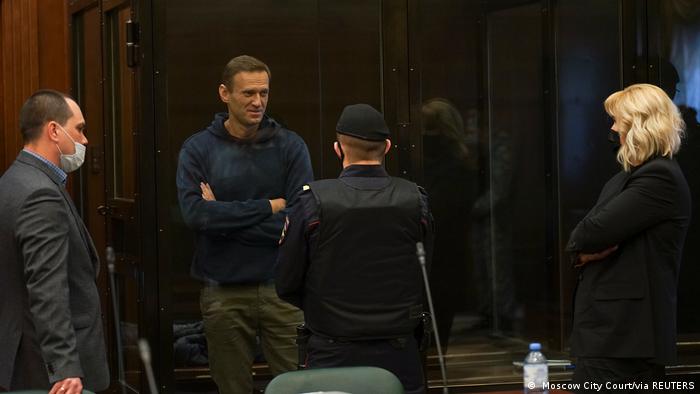 "Many people are very afraid about the situation. They are afraid of losing their job, of getting imprisoned. But I believe that we should all follow the behavior of Alexei Navalny. He is a political prisoner and he is a hero for many of us."

More than 5,750 people have been arrested over the past two weekends during protests calling for Navalny's release.

Navalny was arrested on January 17 as he returned from Germany, where had been recovering from an attempted assassination with a military-grade nerve agent. There is international consensus that Russian security forces were behind the poisoning, though the Kremlin vehemently denies the allegations.

Ahead of the Tuesday hearing, Russia's penitentiary services asked the Simonovsky District Court to upgrade Navalny's three-and-a-half-year suspended sentence into a custodial sentence. The sentence is related to the so-called Yves Rocher case. In 2014, Alexei Navalny and his brother were convicted of fraud and money laundering over their dealings with the French company's Russian subsidiary. Navalny has denounced the convictions as politically motivated. In 2017, the European Court of Human Rights found the trial had not been fair and described the ruling as arbitrary and unreasonable.

Navalny's lawyers argue that he could not register with Russian authorities in person as stipulated, because he was recovering in Germany. Navalny also said his rights to due process were grossly violated and that his arrest was a travesty of justice.

He is already serving a 30-day sentence in connection with the same case.

Kremlin spokesman Dmitry Peskov said he hoped that the "nonsense" would not affect ties with the European Union, which has sharply criticized Moscow's treatment of Navalny. He said Russia would not be lectured by EU foreign affairs chief Josep Borrell when he visits Moscow this week.

Russian authorities have detained associates of the jailed opposition leader after protests in more than 100 Russian cities last weekend. From jail, Navalny called on his supporters to keep taking to the streets.