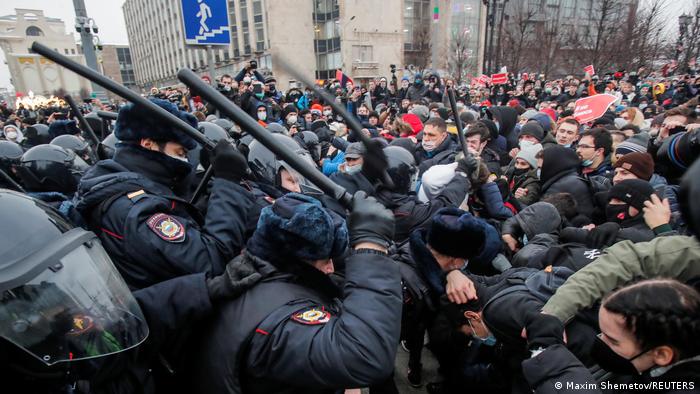 Navalny's arrest sparked massive protests across Russia over the weekend, more are planned for Sunday

Police in Moscow raided apartments and offices belonging to Russian opposition figure Alexei Navalny and his associates on Wednesday. It is unclear whether arrests were made and what police were looking for.

It is reported that Navalny's wife Yulia was in one of the apartments and his brother Oleg in the other. Police also raided two offices belonging to Navalny's FBK anti-corruption organization. Several social media users posted images and video of police breaking down doors at the apartments as well as the offices. One user posted video of "special units breaking down the door to the 'Navalny Live' studio"

'Rights are being violated'

DW spoke with Yulia Navalnay's lawyer, Veronika Polyakova, who said police are preventing her from entering the apartment to speak with her client.

"We can see that there are mass searches at the homes of the employees of the anti-corruption fund today. They are clearly being treated in a biased way by authorities and their rights to legal protection are being violated," Polyakova said.

"As her lawyer, I would say that at the moment, Yulia's rights are being violated, and so are the rights of others who are not being allowed to see their lawyers. Unfortunately, at the moment this is a common practice."

DW's Russia correspondent Emily Sherwin noted that in light of the pro-Navalny protests last weekend across Russia, the raids appear to be targeting those connected to the Russian opposition leader.

"Looking at it from a distance, it does feel a bit like a crackdown against the allies of Alexei Navalny," Sherwin said.

She added that it's important to note that the raids have "come almost at the same time" as new reports emerged into the FSB agents accused of involvement in Navalny's poisoning. Bellingcat, The Insider and other media outlets reported that the agents may have poisoned at least three other public figures in recent years.

International outrage
On January 13, Navalny was immediately arrested upon returning to Russia from Germany, where he had received medical treatment after an assassination attempt. There is international consensus that Russian security forces were behind his poisoning, though the Kremlin vehemently denies the allegations.

The poisoning and renewed arrest of the opposition figure have caused international outrage. His arrest also sparked massive protests calling for his release over the weekend. During the protests, which authorities say were illegal as well as in violation of coronavirus measures in the country, nearly 4,000 arrests were made.

Versailles on the Black Sea?

Navalny, a perennial thorn in the side of Russian President Vladimir Putin, recently released a video revealing a massive billion-dollar Black Sea palace purportedly owned by Putin and paid for with corruption money from numerous oligarchs to curry favor with the strongman. Putin, who is known to maintain bank accounts in the names of supporters, denied the accusation, saying the building did not belong to him or his family.

Navalny's organization has called for renewed protests this weekend.