Navalny's wife, Yulia, was taken into custody for a second weekend in a row for taking part in the demonstrations. Police have detained over 5,100 people and deployed unprecedented security measures to curb the protests. 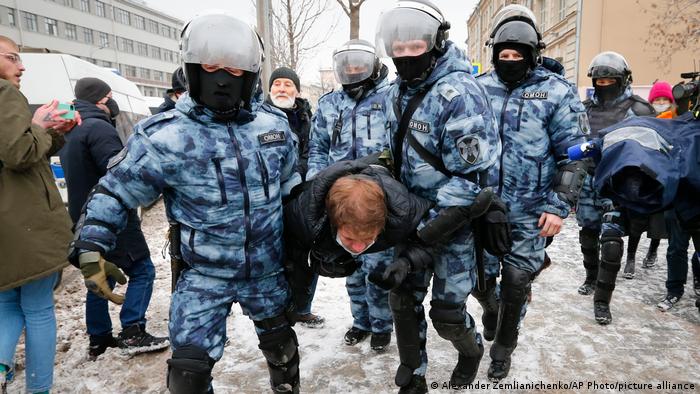 Police rounded up hundreds of people in Moscow

Thousands of people turned out in cities across Russia on Sunday to demand the release of detained opposition leader Alexei Navalny.

Police have, so far, detained more than 5,100 demonstrators, according to monitoring group OVD-Info.

More than 1,600 were rounded up in Moscow alone — including Navalny's wife, Yulia Navalnaya, the Kremlin critic's allies said on social media. She was also detained during last weekend's protests.

"If we keep silent, they will come after any of us tomorrow,'' she wrote on Instagram before turning out to protest.

Police closed off the capital's Lubyanka square near the Kremlin where protesters had planned to gather at midday local time (0900 UTC/GMT). Instead, organizers urged demonstrators to gather at another central square, but authorities cleared them from there as well.

Hundreds marched through the city chanting "Freedom!" and "Putin resign!" as riot police sought to break up the crowds. Some later headed towards the Matrosskaya Tishina prison where Navalny is being held.

DW's Moscow correspondent Emily Sherwin says police and protesters have been playing a game of cat and mouse: "We knew that the authorities were going to block off a huge chunk of the center of Moscow ... we're seeing, again and again, a new meeting point being announced by Navalny's team, metro stations around that being closed, police arriving … and arrests have been taking place as well."

What the protesters are saying

Several demonstrators in Moscow said they were protesting in the hopes of achieving a better Russia with improved living conditions rather than because of Navalny himself.

"Adults are used to being told what to do, being controlled. But young people are used to organizing themselves, that's why I came here today. I want a stake in what is happening in my country — I have to live here," one young protester told DW correspondent Emily Sherwin.

"I have a two-year-old son. And if Putin stays in power for the next 16 years, as he is planning to, then my son will grow up with only him in power and I don't think anything good will come of it," said another protester.

From Vladivostok to St. Petersburg

Several thousands of protesters marched through Russia's second-largest city of St. Petersburg. Over 1,150 people were detained there, according to OVD-Info, while news reports described police using tear gas and tasers against the crowds.

The first protests kicked off in the country's far east, where police in the city of Vladivostok blocked protesters from reaching the center. Video footage showed people linking hands and chanting "Putin is a thief" as they gathered in temperatures of around minus 13 degrees Celsius (8.6 degrees Fahrenheit). At least 120 people were detained there after protesters danced on the ice and rallied in the city center, according to the monitor.

Thousands of people also attended a rally in the eastern Siberian city of Novosibirsk, where more than 100 were detained. Local media reported that clashes had broken out between police and protesters in the central city of Chelyabinsk, where another large march was underway. 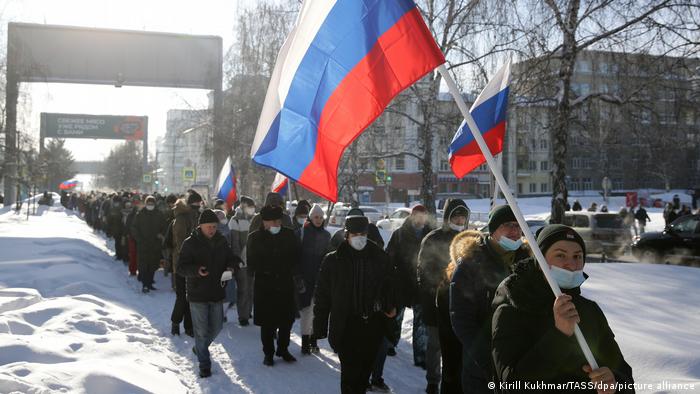 Thousands of people were arrested a week ago during nationwide demonstrations in support of Navalny, who was arrested on January 17 after returning from Germany. The outspoken Kremlin critic was poisoned with the nerve agent Novichok in Siberia last summer and had been receiving treatment in Berlin.

Police warned that Sunday's rallies were unauthorized and would be broken up, while the Interior Ministry said those taking part could face jail time.

Authorities introduced unprecedented security measures in the capital in a bid to restrict protesters' movements. They shut down seven metro stations in the city center, blocked off streets around the Kremlin and ordered restaurants and stores to stay closed.

Police also asked Moscow cafes to turn off their internet connections ahead of the protests.

Washington criticized the crackdown on protesters and urged Russia to release Navalny.

"The US condemns the persistent use of harsh tactics against peaceful protesters and journalists by Russian authorities for a second week straight," US Secretary of State Antony Blinken said on Twitter.

Moscow later hit back at the criticism, accusing the US of meddling in Russia's affairs and trying to destabilize the situation.

"The gross interference of the United States in Russia's internal affairs is as proven a fact as the promotion of fakes and calls for unauthorized rallies by online platforms controlled by Washington," Russia's Foreign Ministry said in a statement on Facebook.

European Commission Vice President Josep Borrell criticized what he called a "disproportionate use of force" on the part of Russian authorities.

"I deplore widespread detentions and disproportionate use of force against protesters and journalists in #Russia again today," said Borrell. "People must be able to exercise their right to demonstrate without fear of repression. Russia needs to comply with its international commitments."

"Canada is deeply concerned by the mass detentions and the use of force against protesters and journalists in Russia," Foreign Minister Marc Garneau wrote on Twitter. "We call on Russia to release those detained, adhere to its international commitments and protect media freedom."

Amnesty International also said that authorities in Moscow have arrested so many people that the city's detention facilities have run out of space. "The Kremlin is waging a war on the human rights of people in Russia, stifling protesters' calls for freedom and change,'' Natalia Zviagina, the group's Moscow office head, said in a statement.

Last week, hundreds of thousands of demonstrators protested in support of Navalny. A record 4,002 people were arrested for their involvement in the protests.

Navalny, 44, was immediately detained upon his arrival in Moscow earlier this month. He is accused of violating the conditions of a 2014 suspended sentence. A court is due to meet next week to consider whether to hand him a jail term of up to three and a half years.

Many of the opposition politician's associates were targeted in the lead-up to Sunday's protests. His brother Oleg, top aide Lyubov Sobol and three other people were sentenced to two months of house arrest on Friday for allegedly violating coronavirus regulations during last weekend's mass demonstrations.