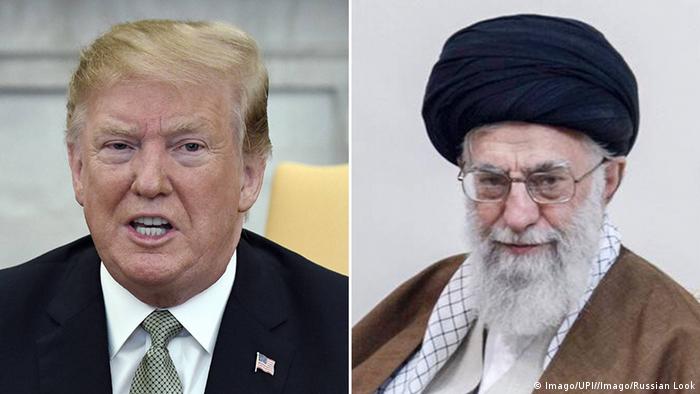 Washington said its strike on Soleimani was in response to Iranian proxies leading an assault on the US embassy in Baghdad, while preventing "imminent" threats to US assets and personnel in Iraq. Iran said it would respond with a "campaign" of revenge.

Hours after Tuesday's funeral of General Soleimani, Iran struck bases in Iraq housing US troops. According to the Pentagon, dozens of Iranian missiles were fired at Al Asad Air Base and an air base near Erbil in northern Iraq in the pre-dawn hours Wednesday morning.

As the smoke clears from the US strike and the Iranian response, the international community is on edge over the possibility that the US and Iran are inching step by step towards direct armed conflict in the Middle East.

However, there have been reports that the missiles intentionally missed areas where troops were located, and experts have said that regime in Tehran conducted the strike to bolster its image at home.

After the strike, Iran's Foreign Minister Mohammad Javad Zarif tweeted that Iran "concluded proportionate measures" for self-defense, targeting the bases from where the "cowardly attack" against Iranian officials was launched.

Zarif added that Iran did not seek "escalation or war."

US President Donald Trump tweeted shortly after Zarif that "all is well" and an assessment of damage and casualties was ongoing, with the US president saying everything is "so far, so good."

Trump later confirmed that the US suffered no casualties and only "minimal damage" was sustained.

"Iran appears to be standing down," Trump said in a televised address on Wednesday.

Prior to his death, General Soleimani had been portrayed by Iranian propaganda into a national hero who defeated "Islamic State" (IS) and protected Iranians. Soleimani led the Quds force, a special expeditionary arm of Iran's Revolutionary Guards Corps that answered only to Iran's supreme leader, Ayatollah Khomeini.

His killing gave the regime in Tehran a martyr and a rallying cry against the United States. During a speech in Soleimani's hometown, Kerman, the leader of the Revolutionary Guards, Hossein Salami, told the crowd that Iran would take revenge and "set ablaze" places supported by the US.

The strike on the two bases in Iraq, one of which has hosted President Trump and Vice President Mike Pence on several occasions, served to fulfill to the Islamic Republic's promise of a response.

"Iranian propaganda is portraying these attacks as a 'crushing victory' of what they are calling a 'hard revenge' campaign for the martyrdom of Soleimani. And they've been congratulating the Iranian people and the nation on this victory over the US," said Ali Fathollah-Nejad, an Iran expert at the Brookings Doha Center.

"They're doing that in a sense to show that the revenge campaign is over with this major blow to the Americans."

According to Iran's state-run Fars news agency, the Revolutionary Guard Corps said the strikes killed at least 80 US army personnel, and resulted in the "destruction of a considerable number of drones and helicopters." There has been no independent confirmation of these claims.

Paulo Casaca, Iran expert and director of the South Asia Democratic Forum in Brussels, said that the missile strike was more symbolism than a strategic strike.

Casaca said, according to reports he read, the missiles were not targeted to the facilities directly, and he suspects Iranian military did not deploy its best missile technology in the strike. "I really don't think they were trying to kill or injure Americans. I think it was more of a theatrical operation."

What could come next?

Symbolic or not, Wednesday's rocket attack is the most significant military action undertaken by Iran in a conflict with the US that has been simmering since Washington dropped out of an international nuclear deal in 2018 and reintroduced sanctions in a campaign of "maximum pressure."

In the words of Ayatollah Khomeini, Iran's strike was a "slap in the face" of the US, and added that "military action is not enough."

Iranian President Rouhani has said that Iran's goal after the killing of Soleimani is to force the US to remove all of its military forces from the Middle East. The Iraqi Prime Minister, Adel Abdul Mahdi, has already called for the withdrawal of the around 5,000 US troops based in Iraq. The Pentagon says it will not move US forces.

Hossein Aryan, an Iranian military affairs analyst said that the goal of US military withdrawal is "unattainable" and that if the conflict should escalate, Iran's strategy moving forward would be a combination of asymmetric warfare, and sudden attacks on US facilities in the region.

However, Washington and Tehran cannot afford to go to war in the Middle East, even if both sides take big risks to save face.

"I don't think there will be a frontal, formal war between the US and Iran in Iraq. I think Iran will resume its normal tactics of using proxies and disguising its attacks," said Casaca.

Casaca added that Iran's strike on Wednesday was Tehran's attempt to portray itself as a "normal, civilized nation" answering to an attack, and that by avoiding a direct hit on US personnel, Iran has opened the door to de-esaclation.

Nevertheless, almost two years since the US began its maximum pressure campaign, the warnings of experts and world leaders that the disintegration of diplomacy would lead to conflict with Iran, and further destabilize an already volatile region, are getting closer to reality.