As the United States and other Western countries pull diplomatic staff out of Ukraine over fears of Russian intervention, foreigners working in the Ukrainian capital tell DW life is going on largely as normal — for now. 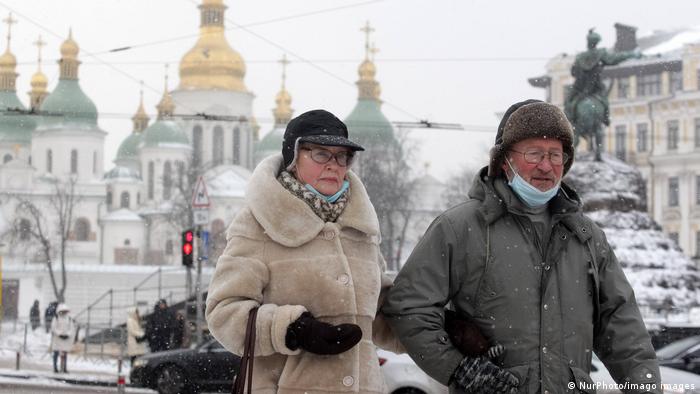 Jens Daessler is not in a hurry. "I have a phone full of messages," says the German business coach with a weary smile, most of them from friends and relatives asking if he plans to leave his home in Kyiv. It's a familiar story to many foreigners living and working in Ukraine's capital.

While tensions between Russia and Ukraine are nothing new, it was the recent decision by the United States and other Western countries to withdraw embassy staff that really cut through internationally, signaling that war is now a very real possibility.

"Usually I would speak to my parents every month or so; at the moment, I'm speaking to them every two days," says Ken Herbert, who moved to Ukraine from Sydney two years ago.

With Australia also flying out its diplomats and encouraging citizens to steer clear of Ukraine, Herbert received a call from his embassy asking if he was planning to leave. It was a question, he says, that caught him off guard.

But like most people DW has spoken to, Herbert is staying.

Taking the decision to pack up and leave is made all the harder by the fact that in normal times, Kyiv is a very safe city in terms of crime. "I generally feel safer here than I do in Australia. In Sydney I wouldn't walk down an alleyway in the night," says Herbert, something he would have no worries doing in Kyiv.

The threat posed by Russian President Vladimir Putin's troops is, for now, still hundreds of kilometers away.

Instead, everyday life continues, and news of new restaurant openings is just as likely to appear in people's social media feeds as updates from the border.

Daessler says he struggles to recognize the picture of his adopted home painted by international media. For him, "the sun is still shining, there's pizza and there's sushi, there's everything." 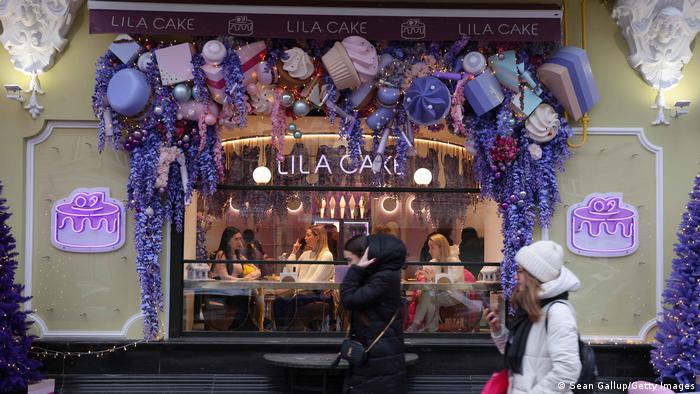 As Russian troops build up on the border, life in Kyiv goes on largely as normal

"The situation has changed for people outside Ukraine — they're suddenly more aware of what's going on here," says American communications specialist Kari Hiepko-Odermann, who moved to Kyiv with her husband and children in 2018.

Locals, Hiepko-Oldermann points out, have long been living with the threat of conflict with Russia, going back to nearly a decade ago when Moscow annexed Crimea in 2014 and supported pro-Russian separatists in the east.

"Ukrainians have been sitting in this hot water for more than eight years," she says. This is part of the reason, she adds, why outsiders are more likely than locals to be alarmed by the current situation.

Hiepko-Odermann admits that while she and her family are staying in Kyiv for now, she has already noticed the impact of the tensions, with her children's classmates disappearing as expat families ditch her Kyiv neighborhood.

Some expats, especially those able to work remotely, are taking extended trips away in the hope they can sit out the tensions in safety and return once they subside.

Kyiv residents weigh in on prospect of war

Mixed messages coming from the very top of Ukraine's government in recent weeks have added to the confusion.

In a recent video message, President Volodymyr Zelenskyy downplayed the threat of escalation and called upon Ukrainians to stay calm and avoid panic-buying.

But the very next day, he told a reporter from The Washington Post that Ukraine's second-biggest city, Kharkiv, just 40 kilometers (25 miles) from the Russian border, was a likely target for Russian occupation.

This was seen as a gaffe in Ukraine, given Zelenskyy's attempts to play the situation down.

A top Ukrainian general recently singled out February 20 as a likely date for a Russian incursion, coinciding as it does with the end of the Winter Olympics in China.

The Kremlin, the argument goes, would not want to anger its allies in Beijing by launching a military campaign that overshadows coverage of the Games — as was the case during the 2008 Summer Olympics in Beijing, which coincided with Russia's intervention in Georgia.

At the same time, in briefings of journalists, top Zelenskyy aides have been dismissing Russia's troop buildup as little more than political bluff.

Little wonder, then, that pundits and ordinary Ukrainians alike have been left scratching their heads, trying to understand exactly what is happening in their country. 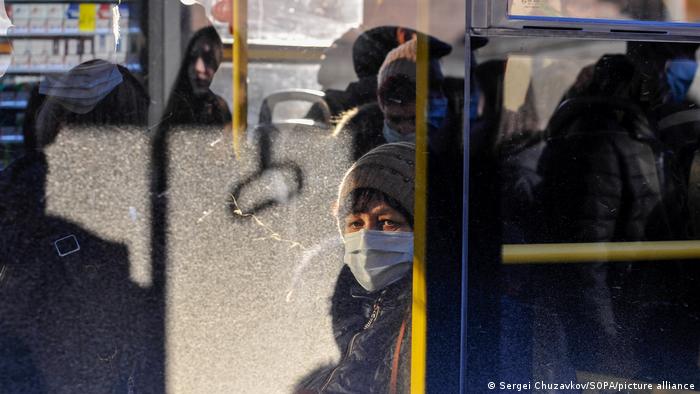 As political tensions simmer, the COVID pandemic continues in the background, also in Ukraine

In this moment of confusion, many expats are seeing their Ukrainian friends look to the West for reassurance that their country will not be left alone to face Russia.

Berlin's reluctance to send Kyiv defensive weapons is a sore point, and something many German expats say has negatively impacted ordinary Ukrainians' view of Germany. Daessler wishes that "German politicians would step up and give a clear message [of support] for Ukraine."

Recent deliveries of ammunition and anti-tank missiles from the United States have gone down very well with the Ukrainian public, not surprisingly. The advanced age of US President Joe Biden, often cited as a weakness, could now be playing out to his advantage, says Hiepko-Odermann.

"He's familiar with how to do Cold War politics." 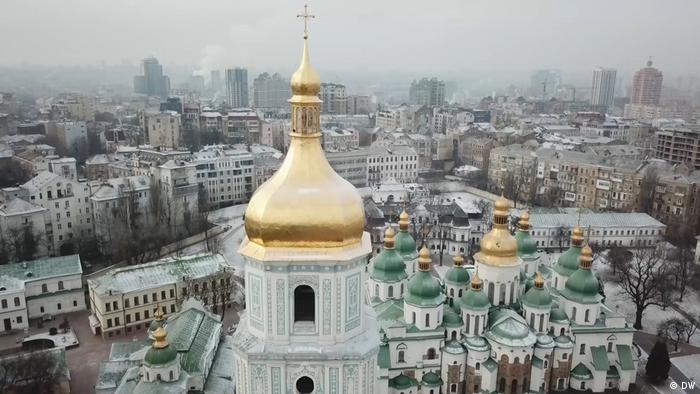 Nearly 3 million people make their home in Kyiv, a combination of old and new

To go or to stay

While international diplomacy continues — often enough without Ukrainian representatives at the table — Ukrainians and expats are being encouraged to prepare to make a hasty exit, should the situation escalate.

Keeping an "emergency case" packed and ready with documents, cash and a first-aid kit could just make the difference between leaving in time and getting stuck. From vodka to disinfect wounds and emergency flares to attract attention, Ukrainian media and forums are full of conflicting advice on what exactly people should try to take with them.

All that is assuming that people would actually be able to leave their hometowns in time if an escalation were to take place. Analysts warn that gridlock on the roads, communication outages and military checkpoints may mean that even the most carefully laid plans end up proving unworkable. 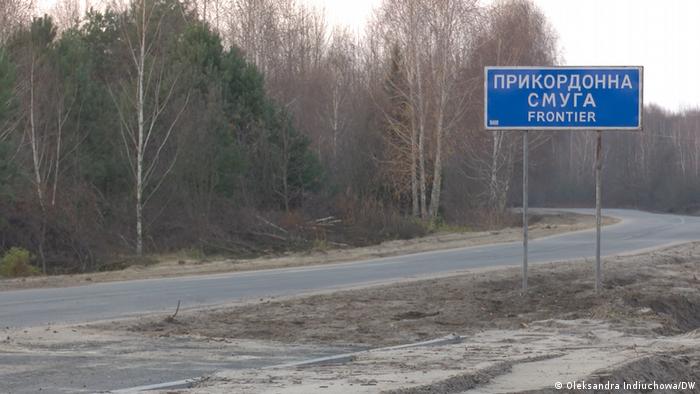 People in Ukraine are reminded that border crossings, like here with Belarus and Poland, may not be easily accessible if Russia invades

But not everyone in Kyiv is packing emergency bags and practicing their first aid skills; some members of Kyiv's expat community have chosen a very different route.

"The more you follow the German news or even the American news, the more scared you are," says Daessler.

The answer for him and many others right now is simple: to try to take a break from the news.

Correction (January 30, 2022): This article has been updated to clarify that it is top Zelenskyy aides who have been dismissing Russia's troop buildup as little more than political bluff, not allies.

Top US diplomat Antony Blinken has stressed unity with Ukraine and accused Russia of sowing division. The US is using the trip to send a signal of solidarity with Kyiv ahead of talks with Russia later this week.

Opinion: Putin gets his way as West scrambles

Russia's President Putin is set to bask in the global limelight as a series of high-profile conferences on security in Europe kicks off this week. What could be better for an autocratic ruler, says DW's Bernd Riegert.

US, NATO hit impasse with Russia over Ukraine