President Volodymyr Zelenskyy said that the way the West and the media were playing up its conflict with Russia would "cost Ukrainians dearly." He said President Biden was making a "mistake" with his strong rhetoric. 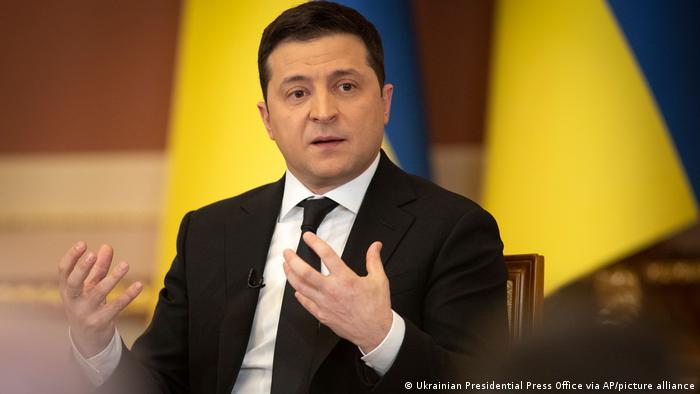 Ukraine's President Volodymyr Zelenskyy held a press conference with international media on Friday and called on the West not to create "panic" over tensions with Russia, saying it had further damaged Ukraine's long-fragile economy by prompting capital outflows.

While he did not dismiss the possibility of military conflict with Russia, the Ukrainian president said the White House was making a "mistake" in highlighting excessively the risk of a large-scale war, saying he had told President Joe Biden as much in a telephone call the previous evening.

"There are no tanks in the streets. But media give the impression, if one is not here, that we have a war, that we have army in the streets... That's not the case. We don't need this panic," Zelenskyy said, adding that "I don't consider the situation now more tense than before," though, "I am not saying an escalation is not possible."

Earlier on Friday Russia signaled some approval of US proposals received in writing, in response to a series of ultimatums it had issued.

Russian Foreign Minister Sergey Lavrov said the counterproposals sent by the United States were better than those sent by NATO. The responses were to the ultimatums Russia had issued earlier this week over NATO expansion since 1997.

Russia has over 100,000 troops amassed near its border to Ukraine. The US and Europe have threatened "massive consequences" should Russia invade Ukraine.

It is unclear exactly what the US offered or said that NATO did not, but the US has held to its obligation to NATO allies and said NATO expansion and force posture were nonnegotiable.

John Sullivan, the US ambassador to Russia, said Washington's counterproposals included curbs on military exercises and missiles in Europe. Sullivan said the US was now awaiting written responses from Moscow, adding that he considered the troops stationed near Ukraine to be an unacceptable part of a negotiating strategy.

"If I put a gun on the table and say that I come in peace, that's threatening," he said.

Lavrov said the US proposal had "grains of rationality" on what he termed "secondary issues." He called it "almost an example of diplomatic propriety," while describing the NATO response as "idealized."

"I was a little ashamed for the people who wrote these texts," Lavrov said, referring to the NATO response.

What else has Russia said?

Lavrov has cautioned against sanctions targeting Russian leader Vladimir Putin or plans to sever the country from the international banking transactions system known as SWIFT, saying it would be the equivalent of cutting diplomatic ties.

Additionally, Lavrov said he would be speaking with German Foreign Minister Annalena Baerbock later on Friday.

He also expects to meet with US Secretary of State Antony Blinken in the next few weeks.

What else have European leaders said?

French President Emmanuel Macron spoke with President Putin on Friday in an attempt to urge him toward a diplomatic path, Paris said. The Kremlin repeated Russia's grievance that NATO had not taken Russia's demands seriously whereas the Elysee Palace emphasized consequences or diplomacy, leaving a path for the latter open.

UK Defense Secretary Ben Wallace is in Brussels to shore up support for Ukraine. Wallace previously penned an article in support of Ukraine, and the UK has also sent weapons.

Germany's foreign intelligence chief Bruno Kahl said in an interview with Reuters that he did not believe Russia had yet decided whether to invade.

"The crisis can develop in thousands of ways," Kahl said.

Speaking on Friday, Belarusian leader Alexander Lukashenko said war was only possible if Belarus or Russia were attacked. Belarus is currently hosting Russian troops and conducting war games with Russia.

In central Europe, Hungary's Viktor Orban said his country would seek more Russian gas as the country faces a supply crunch. Hungary's foreign minister, Peter Szijjarto, said on Friday in a news briefing broadcast on his Facebook page that the US had offered to temporarily deploy more troops in the country. He said Hungary's Defense Ministry was discussing the issue.

Slovak Foreign Minister Ivan Korcok confirmed in an op-ed for the liberal daily Sme media reports that Slovakia, which borders Ukraine, was in talks to receive NATO troops "in order to strengthen its defense."

Russian warships were also conducting exercises in the Black Sea.

Are Ukrainians preparing for a Russian invasion?

As diplomatic talks aim to ease further tension between Russia and Ukraine, many Ukrainians are mulling whether the crisis is all hot air — or if it's time to pack their bags for safety. A recent survey sheds some light.

US, NATO hit impasse with Russia

German foreign minister: 'We are working on a strong package of sanctions'