Top US diplomat Antony Blinken has stressed unity with Ukraine and accused Russia of sowing division. The US is using the trip to send a signal of solidarity with Kyiv ahead of talks with Russia later this week.

Blinken: 'One nation can't simply change the borders of another by force'

US Secretary of State Antony Blinken assured Ukrainian President Volodymyr Zelenskyy on Wednesday that the US and its allies stood with Ukraine amid fears over Russia's military movements.

Blinken's visit comes amid soaring tensions between Washington and Moscow as tens of thousands of Russian troops mass near Ukraine's borders, prompting fears of a possible invasion.

What did Blinken say?

Blinken said he traveled to Kyiv to show Washington's unwavering support for Ukraine when its "security, its prosperity, its democracy, its fundamental right to exist as a sovereign independent nation are facing an unprecedented challenge from Russia."

"Moscow has systematically sought to weaken Ukraine's democratic institutions, as well as to divide Ukrainian society using everything from election interference to disinformation to cyberattacks," Blinken added. 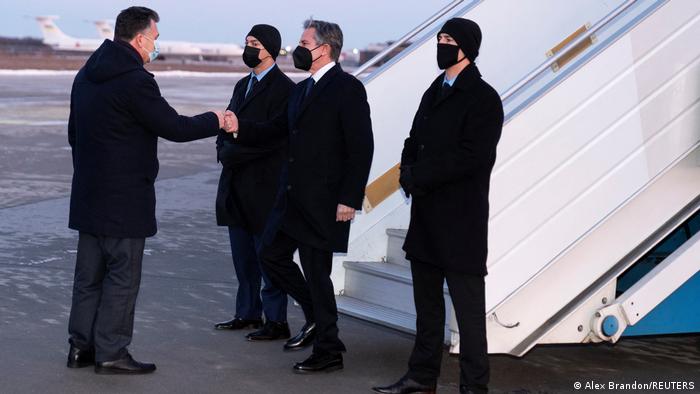 He told Zelenskyy that the US and its allies were steadfast in backing his country and its democratic aspirations.

"The Ukrainian people chose a democratic and European path in 1991. They took to the Maidan to defend that choice in 2013, and unfortunately ever since you have faced relentless aggression from Moscow,'' Blinken said, referring to Ukraine's path since the collapse of the Soviet Union.

"Our strength depends on preserving our unity and that includes unity within Ukraine,'' he said to Zelenskyy. "I think one of Moscow's long-standing goals has been to try to sow divisions between and within our countries, and, quite simply, we cannot and will not let them do that."

Blinken urged Russia to pursue a "peaceful path" and accused Moscow of acting with "no provocation, no reason."

Moscow is attempting "to challenge some very basic principles that undergird the entire international system and are necessary for trying to keep peace and security — principles like one nation can't simply change the borders of another by force," Blinken claimed, alluding to Russia's 2014 annexation of Ukraine's Crimean Peninsula.

"If we allow these principles to be violated with impunity, then we will open a very large Pandora's box. The entire world is watching what is happening here," the top US diplomat warned.

Zelenskyy thanked Blinken for the support, which was only formally confirmed on Wednesday, as well as for his visit and assurances of support.

"This support not only speaks to our strategic plans of Ukraine joining the alliance but more importantly to the level of our military, our military supplies,'' he said, referring to Kyiv's desire to join NATO despite Russia's strong objections.

The West says that under the terms of the Helsinki Final Act — a nontreaty accord to improve East-West detente during the Cold War — nations are entitled to a free choice on which alliances they join.

Russia maintained a tough posture, saying it will accept nothing less than "watertight" US guarantees that Ukraine will never be accepted as part of NATO.

Following Blinken's meeting with Ukrainian leaders on Wednesday, the top US diplomat threatened Russia with additional sanctions if more aggression occurs, along with further American military assistance to Kyiv.

US and Russia to hold further talks

The show of US support for Ukraine comes ahead of a meeting between Blinken and Russian Foreign Minister Sergei Lavrov expected to take place in Geneva on Friday.

Ukrainian Foreign Minister Dmytro Kuleba said Wednesday that he hopes Russia would be less aggressive following the meeting between Blinken and Lavrov. Kuleba also said Kyiv is not planning any attacks against pro-Russian separatists in Ukraine.

The Ukraine trip also comes after talks between Moscow and the West held in Europe last week failed to allay fears and resolve disagreements over Ukraine and other security matters.

Russia has repeatedly denied that an invasion is planned.

In a call between the US and Russian top diplomats ahead of Blinken's trip, Lavrov had urged Blinken "not to replicate speculation about the allegedly impending 'Russian aggression.'"

Any discussion on European security must include NATO partners and allies in Europe, including Ukraine, he said.

Blinken said he would not present a written response to Russian security proposals during his meeting with Lavrov on Friday. The top US diplomat said the two sides need to explore common ground.

Blinken will also travel to Berlin on Thursday where he plans to meet German Foreign Minister Annalena Baerbock, along with their British and French counterparts, to discuss a possible response to any Russian military action.

What next as Russia-West talks over Ukraine fail to ease tensions?

Talks between Russia and the West this week to resolve the security crisis surrounding Ukraine have not led to a breakthrough. Experts expect the crisis to escalate as Moscow ups the ante.

Blinken: 'One nation can't simply change the borders of another by force'