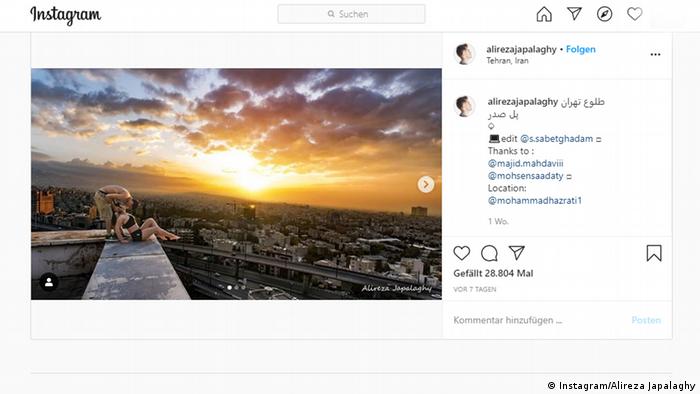 Earlier this month, Mohammad Qomi, chairman of the influential Islamic Development Organization, criticized Instagram in a speech in Iran's parliament.

Instagram, an American photo and video-sharing social networking service, occupies 60 to 70% of Iran's internet bandwidth, according to Qomi, who also claimed that around a third of cybercrime in the country is operated through Instagram. It also provides a platform for gambling and "immoral activities," Qom was quoted as saying by the US-funded Radio Farda.

One of the first tasks of the Islamic Development Organization is to promote the ideals of the 1979 Islamic revolution, and Iran's younger generation is its prime target. 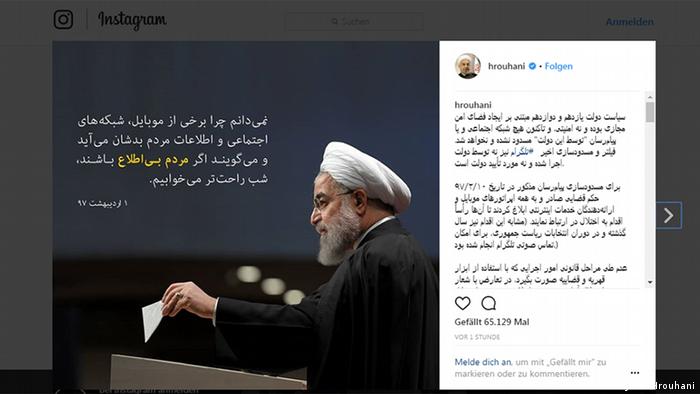 'A window to the world'

"For many Iranians, Instagram is the window to the world, a path to freedom – freedom of expression as well as freedom of thought," Anthony Bellanger, general secretary of the International Federation of Journalists (IFJ), told DW.

Iranians are educated and curious, he added. "Instagram allows them to share pictures – even those that are prohibited by the regime."

According to DataReportal, more than 58 million people in Iran use the internet. In the past twelve months alone, the number of internet users in the country increased by 5.7 million.

More than half of these internet users are also active on social media, and those numbers also increased recently — by 9.4 million between April 2019 and January 2020.

If the regime blocks Instagram, Iranians would be deprived of their last freely available global social media platform. Facebook and Twitter were blocked after the 2009 parliamentary elections, but they can still be accessed through proxy servers. Thereafter, most Iranians switched to Telegram, but the regime banned it after the 2017-18 nationwide protests.

"One of the reasons why people elected President Hassan Rohani, a moderate politician, is that he promised a greater internet freedom. He has repeatedly said his government would never filter information," said Mahsa Alimardani of the British human rights organization, ARTICLE 19.

In her book #iranelection, cultural scientist Negar Mottahedeh wrote that political dynamics in Iran could have changed following the controversial 2009 presidential election that triggered widespread protests.

It was also the first time that social media was extensively used by anti-regime protesters. "This international solidarity, this overwhelming feeling of affinity and kinship among global internet users and local protesters shaped the forms and functions of social media platforms as we know them today," said Mottahedeh.

This is also the background as to why the Iranian regime is skeptical of social media, according to IFJ's Bellanger. It could now move to ban Instagram, he added.

"The government cannot control content on Western social networks, and it has no influence on what is said and shared on these platforms, and that is why it sees them as a threat."

Conservative and religious sections in Iran have problems with what they perceive as "immorality" or a "liberal lifestyle."

"Authorities regularly arrest popular Instagramers. Most recently, in May, famous athlete Alireza Japalaghy was arrested after he posted on Instagram photos of his girlfriend in skimpy clothes. After that, Iranian cyber police issued a warning to women that if they post their photos without hijab on social media or violate moral laws, they could be arrested," said Alimardani.

According to Alimardani, as early as 2015 Iranian censorship officials started focusing on women and men who were promoting a liberal lifestyle.

At the same time, the Iranian government is trying to lure internet users to local social media platforms. But Alimardani says there is no data protection there. "For this reason, many Iranians are reluctant to use these local alternatives."

Bellanger believes if the hardline Shiite regime decides to block Instagram, it would only be a temporary success. "Citizens will do everything possible to circumvent the ban. They will find another social network; they will find other ways to express and share their views. It won't be difficult for them because in this digital age there are no national barriers," he said.