Indian PM Modi needs to grow the Indian economy while building transparent governance of corporations. However, he must first overcome criticism that he is too cozy with India's corporate class. Murali Krishnan reports. 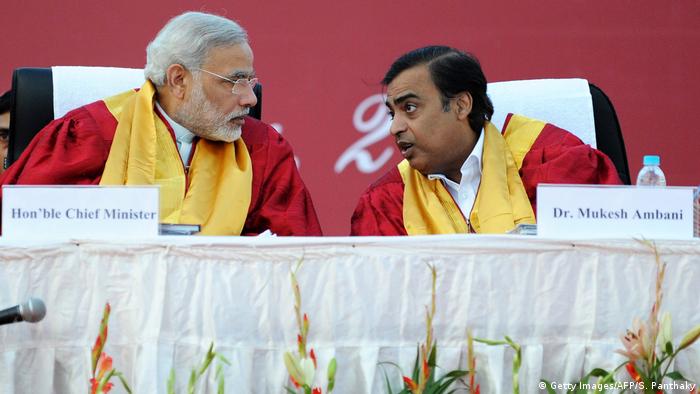 During the Indian general election, standup comedian Kunal Kamra quipped in a viral video that he should have been able to vote directly for the chairman of Reliance Industries, Mukesh Ambani, since the billionaire industrialist already calls the shots in India. "Why is Modi coming between me and Ambani? Why can't I directly vote for Ambani?" joked Kamra.

During his first term as India's prime minister, Narendra Modi was criticized by political opponents and the media for being too close to industrial titans.

And although Modi took steps toward more corporate transparency during his first term, including an improved bankruptcy code and lending regulations, the premier still has a long way to go to allay concerns over India's culture of corporate cronyism.

Head of the table

When Modi was sworn in last Thursday, Ambani — whom Forbes magazine has listed as Asia's richest man — was seated in the front row. Other corporate tycoons at the ceremony included steel magnate LN Mittal, and Gautam Adani, who runs the port development conglomerate Adani Group.

Large business delegations accompanied Modi's foreign trips during his first term. His travel partners often included Adani and Mukesh Ambani's brother, Anil Ambani. The younger Ambani is the chairman of Reliance Group, which was formed in 2006 after splitting from Reliance Industries.

According to figures provided under India's Right to Information Act, companies controlled by either Adani or Ambani signed 18 agreements in 16 countries during these trips — 13 by the Adani Group and five by the Reliance Group.

Although Anil Ambani's business has been selling off assets to repay lenders under new banking regulations, one of his companies, Reliance Defense, won a multibillion-dollar fighter jet contract in 2016.

The high-profile deal with France's Dassault Aviation to produce Rafale fighter jets in India drew fire over allegations that the contract was awarded to Reliance Defense at Modi's behest.

Reliance Defense was registered just 12 days before Modi negotiated the deal with the French government, and it's suggested that the company lacks the experience and know-how to qualify as a manufacturer.

Read more: Rafale controversy: What you need to know about India's fighter jet deal with France

Paranjoy Guha Thakurta, a former editor of India's Economic and Political Weekly, said that he expects Modi's closeness to Adani and the Ambani brothers to continue during the prime minister's second term. "It will be most surprising if their fortunes do not rise significantly in the coming years," he told DW.

Thakurta has done extensive research into suspected connections between the Adani Group and the Modi government. The journalist claims that rules were tweaked in favor of Adani.

Other critics say that India's economic growth is dependent on an intertwining of business and government, which will maintain the corporate world's proximity to political power

"Modi's Digital India program is naturally tied to Mukesh Ambani's success in his telecom and IT infrastructure investments. Similarly, the government's infrastructure modernization of airports, power, ports and gas distribution across India is being largely powered by the Adanis," said an economist, who could not be named because of his position in the Indian government.

One of the first major deals to be signed by Modi's new government is expected to be an airport lease deal with the Adani Group. In February, the conglomerate emerged as the highest bidder for six Airports Authority of India (AAI)-run airports put up for privatization.

After election results showed Modi's coalition would come to power, India's benchmark Bombay Stock Exchange, Sensex, crossed the 40,000 mark for the first time. It reflects widespread optimism among the investor community that Modi's second term in office would produce "big-bang" reforms, accelerating growth and transforming the country into an economic powerhouse.

But economists warn that there are signs pointing to an economic slowdown. "Every indicator from now on will head downward if nothing is done. Both the manufacturing output and portfolio investments have turned negative," Arun Kumar, professor at the Institute of Social Sciences in New Delhi, told DW.

Observers also point to high unemployment and agrarian distress as the primary challenges facing Modi during the next five years.

"Falling prices of agricultural produce, lack of irrigation and storage facilities have been hurting farmers. The increasing number of people in the informal workforce not being able to get quality jobs indicates underlying weakness in the economy," economist Jaspal Singh, told DW.

If Modi's priority is to steer the economy steadily, experts say that the prime minister will need to strike the right policy balance and avoid the appearance of giving selective treatment to corporate tycoons.