New Delhi has signed a deal with France's Dassault Aviation to buy 36 Rafale fighter jets. The agreement comes amid heightened tensions between Pakistan and India, including an attack on an Indian air base. 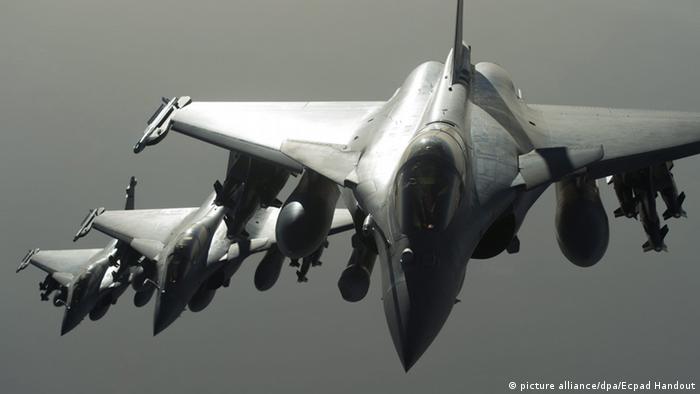 The exact costs of the deal were not yet confirmed, but reports estimated the price at 7.8 billion euros ($8.7 billion). The first planes were scheduled to begin arriving in 2019.

Dassault Aviation, which manufactures Rafale, said it welcomed the deal. It had been put off for over a year and a half as India and France wrangled over costs and bureaucracy. India had originally ordered 126 jets from Dassault in 2012. However talks collapsed, leading to a prolonged delay until India's Prime Minister Narendra Modi agreed on a smaller order of 36 planes in the short term.

The Indian Air Force has been long demanding that the government replenish its fleet, down to 33 squadrons against its requirement of 45. Military officials have been warning of a potential disaster in the face of threats from China and Pakistan.

The deal comes amid heightened tensions between India and Pakistan in recent months, peaking with an attack on the Uri military base in India-administered Kashmir earlier this week. On Friday, Pakistan's foreign ministry criticized India's UN envoy for calling Pakistan a "terrorist state" at the General Assembly.

The Indian envoy had earlier reacted to a statement where Pakistan demanded that the UN investigate rights abuses in Kashmir. Pakistan said New Delhi could not "wish away" the dispute in Kashmir, which has been in turmoil ever since Indian forces killed alleged terrorist Burhan Wani two months ago.

"We will give a 48-hour deadline to Pakistani actors and artists to leave India, or MNS will push them out. Pakistani artists will get beaten up. Along with them, we will also beat up whichever producer or director is with them," MNS leader Amey Khopkar told news agencies.

Talks between the two countries have repeatedly stalled over India's demands for more information on the attack's planners, but Pakistan says the Kashmir issue needs to be solved first.

Earlier this year, prospects for better relations emerged when Indian Prime Minister Narendra Modi made a surprise appearance at Nawaz Sharif's birthday party in Lahore, but the latest strike at Uri and another military base in India in early 2016 have again stalled negotiations.

Pakistan separated from India in 1947, after the subcontinent gained independence from British colonial rule. Kashmir, a kingdom at the time, seceded to the government in New Delhi and gained a special autonomous status in the Indian constitution. Separatist leaders in the Himalayan valley have been demanding independence, but both India and Pakistan stake a claim to the region.

The Pakistani premier has told the UN General Assembly that India is putting forward "unacceptable conditions" for discussing peace. Nawaz Sharif said the world was ignoring the unrest in Kashmir "at its own peril." (22.09.2016)

During his visit to India, France's president has said financial issues remaining over the sale of 36 Rafale fighter jets should be resolved within a few days. Manufacturers Dassault suggest it might take a month. (25.01.2016)