Why are Pakistani Shiites 'disappearing'?

Scores of Shiite Muslims have reportedly gone missing in Pakistan in the past few years. Activists claim that they have been picked up by the country's intelligence agencies after they returned from Syria and Iraq. 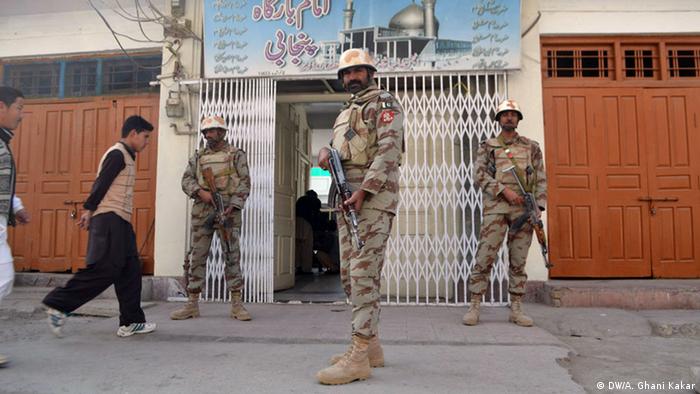 Authorities say that many of the "missing persons" had gone to conflict-ridden countries like Afghanistan, Iraq and Syria and never returned to Pakistan. Those who did come back were allegedly taken into custody by security agencies, although their families say they are unaware about their whereabouts.

Since the start of the Syria conflict in 2010, many people from across the world have traveled to the Middle East to fight for either the "Islamic State" (IS) terror outfit or Iran-allied President Bashar Assad.

Read more: 'No salvation in war,' says returning IS fighter

But Shiite organizations and activists in Pakistan say that the Syria connection is just an excuse for Pakistani authorities to target Shiites, who make up around 10% of the Muslim-majority country's 180 million population.

"Most of the 'missing Shiites' have no militant background. I'm not ruling out the possibility that some may have gone to Syria to fight for the regime, but some 150-160 missing persons simply went on a pilgrimage to Iran, Iraq and Syria," Shiite activist Rashid Rizvi told DW. "Even if they committed a crime, they should be produced before a court of law," he added.

Pakistan, a Sunni Muslim-majority country, is closely allied to Saudi Arabia. Riyadh and Tehran are locked in a number of conflicts across the Middle East. Pakistani Shiites' opposition to Riyadh is directly in conflict with the state policy, although Islamabad says it likes to keep cordial ties with both Saudi Arabia and Iran.

Tales of grief and trauma

60-year-old Sabiha Jafar from the southern city of Karachi says she hasn't been able to sleep properly for more than a year. She told DW that she is desperately waiting for her 32-year-old son, Syed Ali Mehdi, to return home.

A taxi driver by profession, Mehdi went to Dubai in 2010 and returned to Pakistan in September 2017. According to the family, on March 12, 2018, masked security personnel forced their way into their house and took away Mehdi with them, saying he would be released after interrogation.

Read more: Shias in Pakistan's Parachinar caught in the middle of proxy wars

Mehdi's mother said the family contacted many government officials and attended court hearings about other missing persons to know about Mehdi's fate.

DW learnt about other similar stories. The wife of Syed Mumtaz, also based in Karachi, has been awaiting the return of her 57-year-old husband. Mumtaz reportedly went to the western city of Quetta, situated close to Pakistan's border with Afghanistan. The family says that upon his return from a business trip on January 25, 2018, he disappeared from the outskirts of the city.

"We kept searching for him throughout the day," his wife told DW. "We managed to contact the taxi driver who told us that he was picked by some security personnel. Since then, we have been running from pillar to post to retrieve him but to no avail," she added.

"There are Iran-backed militias operating in Iraq and Syria. It is possible that these missing persons may still be in the Middle Eastern countries," Shoaib tol DW. "The Shiite people never picked up arms against the Pakistani state, so why would the security forces target them? These allegations are totally baseless."

Lahore-based security analyst Ahsan Raza says that "enforced disappearances" do take place in Pakistan, but who is behind them is a matter of perception. "Some Shiite youths believe it is their religious duty to protect [their sect's] holy sites, ignoring that they are Pakistanis and it is not their job to be involved in the affairs of other countries," Raza told DW.

"I believe the government should engage with Shiite organizations and clerics to tackle this problem," he underlined.

Raza said many Pakistanis in the past went to Afghanistan to wage jihad and later returned to Pakistan. Many of them posed a security risk to the country due to their continued affiliation with the Taliban, al-Qaida or IS.

"I think the Pakistani government fears that those who returned from Syria or Iraq could also pose a security threat. So they may have taken them into custody for interrogation or possibly for a deradicalization program," Raza said.

Rights activists in Pakistan have launched a campaign to recover peace campaigner Raza Khan, who was allegedly abducted in Lahore. Civil society groups say progressive activists are routinely "kidnapped" in the country. (12.12.2017)

Pakistan Supreme Court's Chief Justice has refused to meet a UN delegation which is in Pakistan on a 10-day mission to investigate cases of missing people, allegedly picked up by country's intelligence agencies. (11.09.2012)