Who was Oliver Ivanovic, the murdered Serb politician in Kosovo?

The murder of key Serb leader Oliver Ivanovic threatens to reignite tensions in the ethnically fueled dispute between Serbia and Kosovo. The moderate politician had faced intimidation several times before his death. 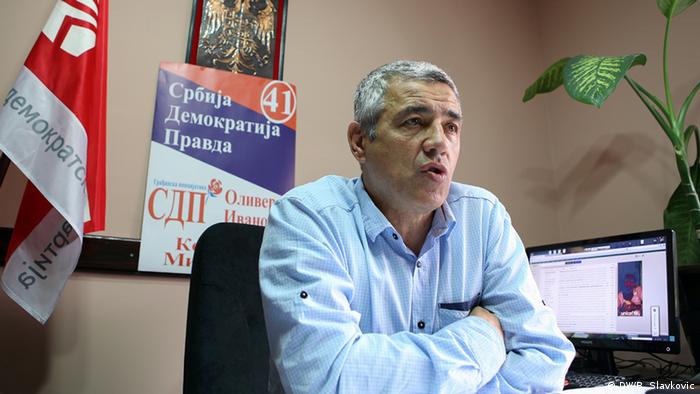 Prominent Serb politician Oliver Ivanovic was killed in the ex-Serbian province of Kosovo as representatives of Belgrade and Pristina were set to meet in Brussels. The murder stands to aggravate the simmering conflict. (16.01.2018)

Solving the conflict between Serbia and Kosovo requires frank talks, says Austrian Balkans expert Wolfgang Petritsch. He believes Brussels must prioritize the relations of the western Balkan states with the EU. (10.12.2017)

An international court sitting in Kosovo has sentenced a Serb leader to nine years in jail for war crimes committed against ethnic Albanians. Serbia condemned the verdict as an attempt at humiliation. (22.01.2016)

Fresh elections are to be held in ethnic Serb areas of northern Kosovo on Sunday after violence and intimidation marred voting two weeks ago. The government urged voters to go to the polls and avoid more violence. (07.11.2013)

Some EU officials worry that Brussels is no match for Russia when it comes to influence in the Balkans. Amid attempts by "external actors" to discredit the EU, officials are blaming Mogherini for inadequate efforts. (14.11.2017)

The mafia-style shooting of Oliver Ivanovic in front of his party office in Kosovska Mitrovica marks the latest stage of the long-running and bloody conflict between Serbs and Albanians in Kosovo.

The 64-year-old Ivanovic originally pursued his ambition of becoming a military pilot, but was forced to give it up after years of training due to a congenital eye defect. He first drew public attention by building an impressive career in karate and winning the Kosovo karate championship.

After the 1999 NATO bombing, Serbia pulled its forces out and thousands of Serbian civilians also fled the province. Ivanovic, still based in Mitrovica, took up a senior position in the newly-formed Serb National Council, where he stayed until 2001. He later served in Serbia's Kosovo Coordination Center and as state secretary in Serbia's specially designated Kosovo Ministry. He has also served as a deputy in Kosovo parliament.

Unlike many Serbian politicians of his generation, he was fluent in Albanian and English, as well as Italian.

In 2014, he was detained by Kosovo authorities on suspicion of war crimes. He was convicted, but his conviction was overturned on appeal. Ivanovic had spent over three years in jail before being released.

The politician also set up the "Freedom, Democracy, Justice" Initiative, a political organization active in Serbian-dominated areas in Kosovo. His political activity has led him into conflict with officials in the breakaway nation's capital, Pristina, but he also occasionally clashed with other Kosovo Serb politicians and powerful figures in Belgrade.

In July last year, he reported that his car had been torched. While commenting on the incident in a DW interview last summer, he said the car burning had been a "message" aimed to scare him into curbing his political activity.

"I feel safe, I am not afraid of anyone or anything. Something like this cannot scare me. But I understood the message," he told DW.

The perpetrators were never found.

'Drug dealers on every corner'

Speaking to the Serbian Vreme magazine last September, he decried the rise of organized crime in the Serbian section of his hometown of Mitrovica.

"The people are not afraid of Albanians, but Serbs, the local bullies and gangster riding SUVs with no license plates," he told the magazine. "There are drug dealers on every corner, parents are concerned."

Ahead of the Kosovo election in October 2017, four members of Ivanovic's party withdrew from the candidate list, allegedly due to pressure and "intimidation" by a rival Serb faction.