Prominent Serb politician Oliver Ivanovic was killed in the ex-Serbian province of Kosovo as representatives of Belgrade and Pristina were set to meet in Brussels. The murder stands to aggravate the simmering conflict.

The 64-year-old Ivanovic was shot in the Serbian area of Kosovska Mitrovica, the city divided between Albanians and Serbs, on Tuesday morning.

According to Ivanovic's lawyer, Nebojsa Vlajic, the attacker used a pistol and shot Ivanovic five times in front of his office. Other sources reported the attacker opened fire from a moving vehicle.

"He was taken to the hospital right away," the lawyer told the Serbian daily Blic. "The doctors tried to revive him, but he could not be saved."

Who was Oliver Ivanovic? 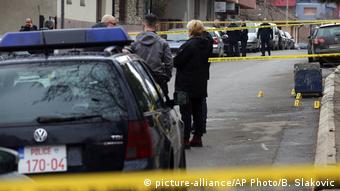 According to Serbian media, he was assassinated in front of his party office in Kosovska Mitrovica. Kosovo police said they were looking for the attackers, with heavy police presence visible near the party quarters. Radio Kosova reports that the security forces found the car used by the attackers, which had been set alight.

DW's Serbian department tweeted a video from the scene, saying that police blocked off the center of the Serbian-controlled part of Kosovska Mitrovica.

Leaders of Kosovo, Albania, and Serbia condemned the killing, with Serbian President Aleksandar Vucic calling for an emergency national security meeting. Vucic described it as an "act of terror" and said that he asked EU and UN officials in Kosovo to include Serbian security forces to investigate the killing.

The news also prompted a Serbian delegation in Brussels to walk out of a meeting with Pristina representatives on Tuesday. The procedural talks had been set to resume on Tuesday after a long break over political issues in Pristina.

Read more: Is Kosovo a breeding ground for Islamists?

"The efforts for dialogue and peace should not be stopped," he wrote on Twitter.

Igor Soltes, the EU Parliament Rapporteur on Kosovo, warned that incidents like these could destabilize security in the region.

The peaceful situation "could break down very quickly" he told DW. "I think it's crucial that everyone on both sides respond soberly and reasonably and attempt to reduce any tensions through dialogue, which could otherwise lead to violence."

EU spokeswoman Maja Kocijancic called on all sides "to show calm and restraint."

Ivanovic's political activity brought him into conflict with Pristina officials; he also occasionally clashed with other Kosovo Serb politicians and powerful figures in Belgrade.

Serbian Prince Aleksandar Karadjordjevic, a member of the royal family, which is largely sidelined in the Balkan country, also issued a statement on the politician's murder. In a cryptic message, the prince said that the murder had "many perpetrators and even more directors."

"Those who [...] believe that, even today, the best way to solve a problem is to gun down your political opponent — those people survived, and they are continuing their criminal quest," he said in a statement.

Ivanovic rose to prominence after the Kosovo war in 1999, which ended with Serbian forces pulling out of the mostly Albanian-populated region. The former Serbian province formally declared independence in 2008.

A court in France has denied an extradition request from Serbia for Ramush Haradinaj. Serbia considers him a war criminal for leading an insurgency in Kosovo. (27.04.2017)