An international court sitting in Kosovo has sentenced a Serb leader to nine years in jail for war crimes committed against ethnic Albanians. Serbia condemned the verdict as an attempt at humiliation. 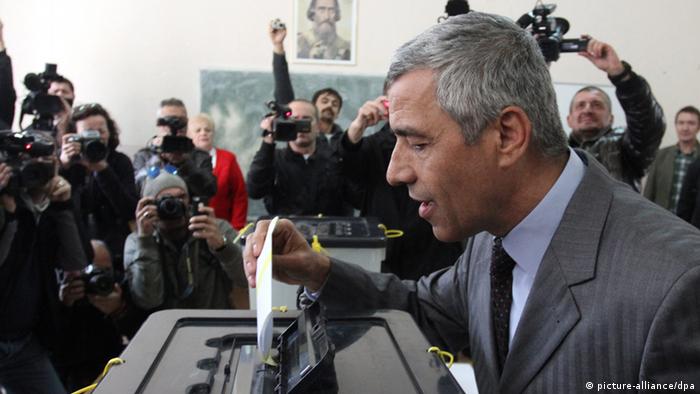 Judges from the European Rule of Law Mission (EULEX) in Kosovo found Oliver Ivanovic guilty of war crimes against ethnic Albanians, a ruling that was slammed by Belgrade.

Ivanovic, considered by some to be a moderate Kosovo Serb politician, has denied the charges, claiming they were politically-motivated. Four Kosovo Serbs who were charged with him were acquitted.

However, judges said they believed Ivanovic was a member of a paramilitary group that had chased ethnic Albanians from the Serb-controlled part of the northern town of Mitrovica. It said men had been separated from women and children and that some of them had been killed.

"Oliver Ivanovic was aware of the operation of expelling and killing civilian ethnic Albanians." He wore a blue uniform and was armed," Judge Roxana Comsa, from Romania, said.

Chill returns to Kosovo and Serbia

Kosovo's Constitutional Court has suspended an agreement with Serbia negotiated with the support of the EU. The move marks a significant new deterioration in the relations between the two countries. (15.11.2015)

"On that day he willingly complied with the plan, knowing that it would result in the killings," Comsa told the court in Mitrovica. "Victims were taken in front of their families and later were executed."

'No lawyer could have changed it'

Serbia's responded to the ruling with condemnation, decrying it a political move aimed at humiliating the country. The head of Serbia's Kosovo office Marko Djuric told Serbian state media RTS that Belgrade was seeking a "measured response."

However, he cast doubt on whether Serbia would continue talks with Kosovo about the normalization of relations which have again become frosty.

"There is no lawyer that could have changed the political determination to humiliate and punish the whole of Serbia."

"This is a red line where we wonder whether to continue and how," he said. The talks were due to resume in Brussels on January 27.

Albanians, who are a 90 percent majority in Kosovo, launched an insurgency against rule from Belgrade in 1998, with fighting becoming an all-out war in the subsequent year. Kosovo broke from Serbian rule after NATO bombed Serbia to halt killings and expulsions of Albanians from the territory.

Kosovo is hoping to join the European Union at some point in the future, and it has been in negotiations with Brussels since 2013. Its independence has still not been recognized by Serbia, or five of the 28 EU member states.Serbia also aspires to EU membership and both countries would both be required to normalize relations before being considered to progress to accession.