Serbia's official EU accession negotiations have begun in Brussels. But for accession to happen, the country will have to undertake fundamental reforms. And then there is the Kosovo question. 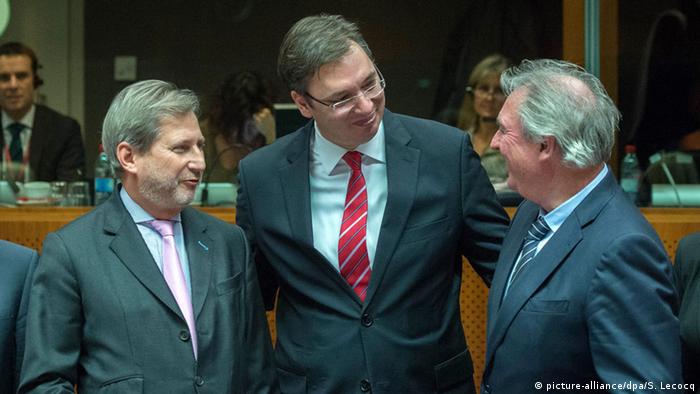 From Serbia's point of view, there is no alternative to membership of the European Union: Prime Minister Aleksandar Vucic has often said that Serbia's strategic goal is to join the EU, tirelessly repeating that he sees no other future for the small Balkan nation.

He also promised that reforms would be pushed through quickly. "In four years, by the end of 2019, Serbia will have completed its share of the work," Vucic announced a few days ago during talks with Johannes Hahn, EU Commissioner for Neighborhood Policy & Enlargement Negotiations, in Belgrade. Whether or not the EU is ready to accept Serbia into the club will not depend on Belgrade, said Vucic.

A way to escape economic misery 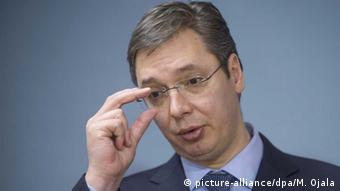 Vucic sees EU membership as the country's only future

Serbia desperately needs investment. The unemployment rate is around 22 percent, and half of the country's young people are jobless. Economic growth, which was negative last year, is expected to be about 0.5 percent in 2015. The average income in Serbia is about 380 euros ($417) a month, and as a result, many young, well-educated Serbs leave the country in search of a better life abroad, mostly in Western Europe and North America.

Serbia was ranked number 67 of 180 on Reporters Without Borders' 2015 World Press Freedom Index, and the Washington-based organization Freedom House described the country as having only a "partially free media." In a September 2014 survey conducted by Germany's Konrad Adenauer Foundation, nine out of ten Serbian journalists said that censorship and self-censorship were common.

At the same time, corruption has penetrated every level of Serbian society. Transparency International ranked the country 78 of 174 on its 2014 Corruption Index, between Montenegro and Tunisia. "Blic," Serbia's largest daily newspaper, recently published a "corruption price list" that ran from 300 euros ($330) for your choice of schools, through 3,000 euros for a doctoral thesis, to 1,000 euros both for a building permit and for preferential treatment in a hospital delivery room.

Five years ago an anti-corruption agency was created in Serbia, but its success has been rather meager. "Our biggest problem is that we cannot prosecute or punish the cases that we find," complains Vladan Joksimovic, the agency's deputy director. Those accused of corruption simply have to pay a small financial penalty and the case is forgotten. This year, eleven cases of high-level political and administrative corruption were reported. One of them went to court.

And then there is the question of Kosovo. Eight years ago, the country declared itself independent of Serbia - something that Belgrade has never accepted. Serbia's constitution clearly defines Kosovo as part of Serbia, and five of the EU's 28 member states have also refused to recognize Kosovo's independence, as have Russia and China.

At the moment, recognition of Kosovo is not an official prerequisite for Serbian EU membership, but it is no secret that several member states, including Germany, would like to create that obligation. That said, Ksenija Milenkovic, director of the Serbian European Integration Office in Belgrade, leaves no doubt that the constitution's clear definition of Kosovo as an integral part of Serbia is not simply rhetoric. "If recognition of Kosovo ever becomes an official term of EU membership, our answer will be a clear - No!" she says resolutely, echoing the sentiments of Prime Minister Vucic.

The EU is quite aware of this. Speaking to DW, the Expansion Commissioner Hahn referred to a "process of normalizing relations between Serbia and Kosovo," rather than recognition. He declined to define at exactly what point relations could be considered "normal." 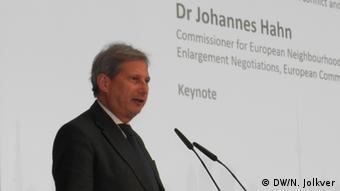 Hahn has to step around the delicate issue of Kosovo

Other and miscellaneous questions

The complexity of the Kosovo question is also the reason that accession negotiations in Brussels are to begin with discussions on chapters 32 (Financial Controls) and 35 (Other Issues) of the so-called chapters of acquis that outline membership talks. Accession talks usually begin with discussions on judiciary, fundamental rights and security issues, but the innocuous sounding "Other Issues" chapter will actually cover negotiations on normalizing Serbia's relations with Kosovo. Germany's lower house, the Bundestag, insisted that negotiations be opened on the Kosovo question and that this be the last chapter closed before negotiations end.

It remains totally unclear as to how long these negotiations will actually take. Though Prime Minister Vucic would like to celebrate his country's EU membership as soon as possible, Ksenija Milenkovic of the European Integration Office is much more reserved. "We have no illusions. We know that expansion is not a priority on the EU agenda right now," she told DW. "At least not with this Commission." On assuming office last November, European Commission President Jean-Claude Juncker stated that expansion would be on hold while he is in office. His term lasts until 2019.

After getting evicted from the Greek border, thousands of refugees and migrants were relocated to former Olympic stadiums-turned-shelters in the capital. As Diego Cupolo found out, they have no idea what to expect next. (11.12.2015)

Weapons linked to Paris attacks made in Serbia

At least seven of the guns connected to the Paris shooters were made in Serbian Zastava factory, a company official said. One of the weapons allegedly found its way back to Europe after Zastava exported it to the US. (11.12.2015)