In his state-of-the-nation address, Russian President Vladimir Putin accused the US of unilaterally withdrawing from the INF treaty. He said he would target the US if it deployed its missiles in Europe. 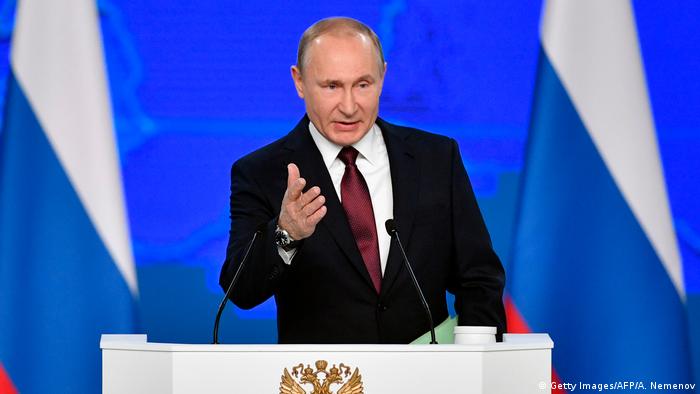 Russian President Vladimir Putin on Wednesday announced new Russian weapons would target the US if it deployed missiles to Europe.

In his state-of-the-nation speech, he announced Russia was developing a new hypersonic missile for the navy and that Russia was building a new submarine with a drone complex capable of hitting both land and sea targets.

He said Russia was not seeking confrontation despite the US withdrawing from the Intermediate-range Nuclear Forces Treaty (INF), but that it would deploy missiles if the US chose to do so.

He warned US policy-makers, "obsessed" with US exceptionalism, should calculate the risks before taking any steps.

"It's their right to think how they want. But can they count? I'm sure they can. Let them count the speed and the range of the weapons systems we are developing," Putin told Russia's political elite to strong applause.

NATO said Putin's threats were "unacceptable" and that Russia should "focus on returning to compliance" with the INF treaty.

The US has accused Russia of developing a new ground-launched cruise missile that violates the INF treaty, a Cold-War era accord that prohibits missiles with ranges between 500 and 5,500 kilometers (around 300 to 3,400 miles).

Russia long denied it had built such missiles, but has recently acknowledged their existence. It denies that the missiles violate the terms of the treaty.

A senior US administration official said any new American missiles were still in the research and development phase.

The majority of Putin's speech was spent on domestic issues. He called for more social and economic development and proposed tax breaks for families with children, noting that Russia's birthrate is falling.

He repeated last year's statistics, saying that 19 million people lived in poverty and that the government should provide assistance or training to help people get out. He also proposed creating 1 million vocational jobs for students.

In business, he said the future for hi-tech growth in Russia was huge. He encouraged Russians to buy Russian products if possible.

Referring to infrastructure, he noted that 60 airports would be upgraded in the coming years, and that there will be increased capacity on the Trans-Siberian Railway. He announced that with the completion of the Kerch Strait Bridge linking Russia to Crimea, rail service would soon begin there.

German Foreign Minister Heiko Maas said the "ball is now in Russia's court" to save the Cold War-era INF treaty. Europe fears an arms race could ensue if the United States leaves the treaty in early February. (24.01.2019)