German Foreign Minister Heiko Maas said the "ball is now in Russia's court" to save the Cold War-era INF treaty. Europe fears an arms race could ensue if the United States leaves the treaty in early February. 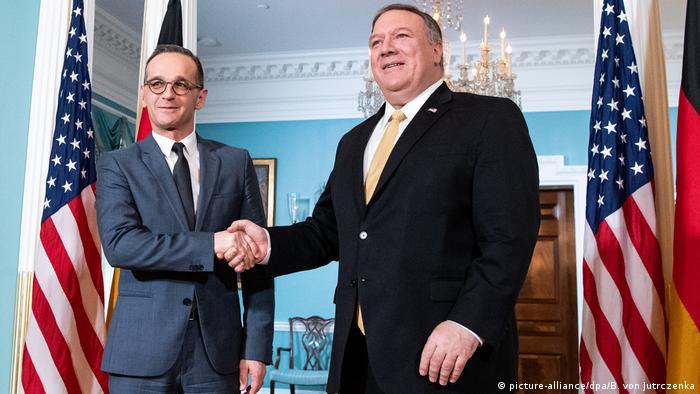 Russia has not done enough to prove that it is adhering to the INF treaty that bans midrange ballistic missiles and the "ball is now in Russia's court" to verify its arsenal, German Foreign Minister Heiko Maas said Wednesday.

European countries fear the United States and Russia could begin stockpiling midrange ballistic missiles if Washington follows through with a pledge to withdraw from the Intermediate Range Nuclear Forces (INF) treaty in early February.

Speaking alongside US Secretary of State Mike Pompeo in Washington, Maas said:

What does the INF ban? The treaty bans ground-based medium-range ballistic missiles that can carry nuclear warheads and have a range of between 500 and 5,000 kilometers (300 and 3,100 miles). The United States and the Soviet Union signed the accord in 1987.

What does Russia claim? Russia denies that the 9M729 missile system violates the INF. Russia says the 9M729's missiles can only hit targets 480 kilometers away.

Read more: INF treaty: Would US dropout begin an arms race with China?

What is the US planning to do? US President Donald Trump has threatened to withdraw from the INF on February 2 if Russia does not prove its compliance before then.

What happens next? NATO is scheduled to discuss Russia's noncompliance at a meeting on Friday. Maas, meanwhile, will on Thursday pay his first visit to the UN Security Council since Germany became a nonpermanent member.