Violence and harassment: South Asian women fight against patriarchy | Asia| An in-depth look at news from across the continent | DW | 25.11.2018

Inspired by the #MeToo movement, an increasing number of women in South Asia are resisting male dominance and gender-based violence. But activists say that a lack of support at the state level makes it an uphill battle. 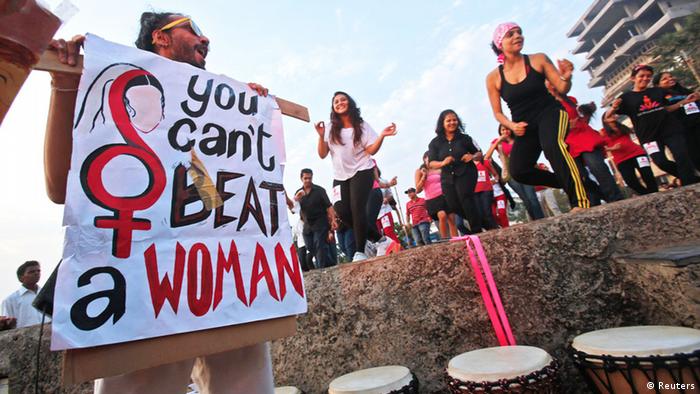 Earlier this year, when former Miss India and actress Tanushree Dutta accused Nana Patekar, a Bollywood icon, of sexual harassment, she was slammed by her own colleagues in the Indian film industry. Only few people came out in her support. Many Indians said Dutta leveled those allegations against Patekar to gain publicity.

Patriarchy is so deep-rooted in South Asian culture that any woman who chooses to stand up for her rights is shamed by a majority of people. She is considered an "immoral" and "Westernized" person bent on destroying the "pious" and family-oriented culture of the region.

Women in Afghanistan, Bangladesh, India and Pakistan are thus taught to stay silent and suffer to protect the honor of their family, their society, their religion and even the state. Violence against women is thus accepted, respected and perpetuated.

Although issues like domestic violence have not really been taken up by the #MeToo movement, feminists believe that the global movement is growing beyond sexual assault and harassment to become a force for women's empowerment.

Dutta's decision to talk about sexual harassment thus encouraged many other women in the male-dominated Indian media and film industry to come forward and share their own bitter experiences.

Although violence against women is a global phenomenon, South Asian women lack legal and societal protections that to a large extent are available to women in the West.

Women in South Asia, therefore, face different kinds of violence on many levels, and the struggle for their rights often bring them into a conflict with the state. Family and gender laws in countries like Pakistan and India often discriminate against women and favor men.

"Empowering women is not a priority for the state," Zia Ahmed Awan, a Pakistani activist, told DW.

"For instance, the number of working women in Pakistan is increasing, but the government hasn't taken any measures to protect them. At the same time, the attitudes that allow violence against women to continue are not being tackled," Awan said.

In her message to DW on the 2018 International Day for the Elimination of Violence against Women, Sharmeen Obaid-Chinoy, an Oscar-winning Pakistani documentary maker, said that more people needed to speak up against gender-based violence.

"We must ensure that the future generation of women doesn't have to face violence," she said.

The situation in neighboring Afghanistan is equally grim. Latifa Sultani, the head of women's affairs at Afghanistan's Independent Human Rights Commission (IHRC), said that violence against women was widespread in her country.

"Afghanistan's deteriorating security situation means that an increasing number of women either do not have access to help and justice or they have lost trust in the system," Sultani told DW.

''We registered 3,445 cases of violence against women in the first 10 months of 2018. The government needs to work with civil society and human rights organizations to support women," she added.

In the absence of support from state authorities, South Asian women have taken it upon themselves to make a difference. That's when movements like #MeToo become crucial for female empowerment.

Zakia Sultana Mukta, the chairperson of the Bangla department at Bangabandhu Sheikh Mujibur Rahman Science and Technology University, was one of the first Bangladeshi women to talk about a sexual harassment incident in public. It encouraged more women to break their silence.

"From the outset, girls are told to tolerate harassment, including offensive comments and other abuses," Mukta told DW.

"But education taught me to change things around. When the incident happened to me, I was shocked. I did not get any support from my family or friends. But now I see that many prominent women have started to talk about harassment," she said, adding that the person she had complained against reacted aggressively and threatened her over the phone.

Sultana Kamal, a Bangladeshi human rights activist, believes the issues of sexual harassment and violence against women can't be separated.

"One of the reasons behind a culture of violence against women is that authorities don't take any action against the perpetrators. As a result, women feel discouraged and don't come forward," Kamal told DW.

"The #MeToo movement is encouraging women to break silence shrouding sexual harassment. More women will talk about these things when they see positive results," she added.

In an age when wars, the rise of right-wing populist politics and economic disenfranchisement are strengthening masculinity, an increasing number of women around the world are resisting these trends by refusing to remain silent. South Asian women are also playing their part.

Shakeela Ebrahimkhel and DW correspondents Harun Ur Rashid Swapan and Unbreen Fatima contributed to this story.