Authorities are struggling to contain colonies of fire ants brought into Japan in shipping containers, with fears rising that this aggressive and rapidly-multiplying species will wreak havoc on local flora and fauna. 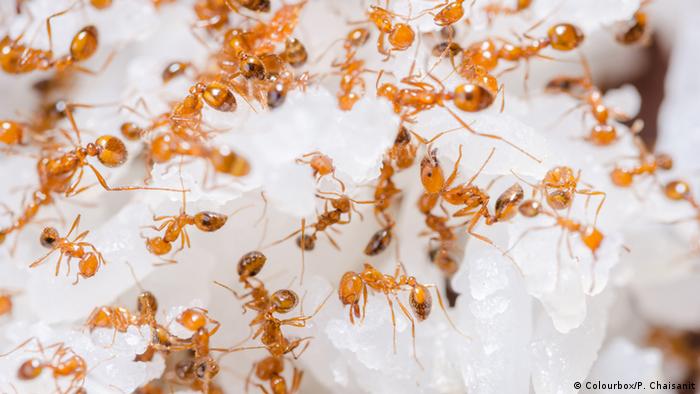 Experts on invasive species of flora and fauna have called on the Japanese government to act swiftly and decisively to eradicate colonies of venomous and quick-breeding fire ants that have been found in a number of ports around the country this summer.

But the discovery this week of another colony at an inland location suggests that the creatures may have already gained a sufficient foothold and will become increasingly difficult to exterminate.

The first fire ants were found on May 26, when a shipping container that had been unloaded from a cargo ship from China's Guangdong province was examined in the port of Kobe. The vessel had docked six days earlier and the swarm of ants had been overlooked in a visual check before the container was transferred to a facility in the town of Amagasaki.

With spring rapidly progressing, cherry trees all over the world are beginning to bloom earlier. But the extreme weather of climate change might thwart our favorite cherry blossom festivals. (31.03.2017)

Automobiles, agriculture and non-tariff barriers remain the biggest stumbling blocks to a deal that will be worth an estimated one trillion euros in additional annual trade between Japan and the EU. Julian Ryall reports. (28.06.2017)

Rice harvested near the site of the 2011 Fukushima nuclear disaster is set to go back on sale. Exporters are trying to rebuild the Fukushima brand but consumers are still wary of potentially contaminated food. (19.08.2014)

The container was returned to Kobe to undergo sterilization procedures and officials from Japan's environment ministry attempted to play down concerns, insisting that it was "unlikely that the fire ants have settled in the area and are breeding." They added that a chemical disinfectant had been used to destroy the colony.

Five days later, a second swarm was discovered in Kobe port and there have been further reports of fire ants in the ports of Osaka and Nagoya, including queens, which are able to produce as many as 1,600 eggs a day. On July 7, the first insects were found in Tokyo port, in a container that had arrived from Hong Kong, but more of the ants have been discovered this week in a warehouse around 30 kilometers inland from the port of Nagoya.

The fear, experts say, is that the insects have managed to spread substantially beyond port areas. As well as being difficult to contain, this species of non-indigenous ants may pose a threat to native flora and fauna, said Shigeto Dobata, an assistant professor of insect ecology at Kyoto University.

"This is an invasive species and a major cause for concern in Japan," Dobata told DW. "The first impact these insects are likely to have will be on the environment or the local ecology and they can drive native species to extinction.

"The other impact can be described as human-related and can involve harm to people and damage to property, and this is a serious concern with fire ants."

Native to South America, fire ants can grow up to six millimeters long, are aggressive and can induce anaphylactic shock and, in extreme cases, death. As their name suggests, a single ant's bite produces a severe burning sensation and swarms of the insects can cause extensive injuries to humans and other animals.

The insects also excavate large underground areas for their colonies, which can cause damage to farmland and undermine buildings and other structures.

"If these insects are able to get away from the port areas, it will be difficult to limit their spread because they are able to reproduce rather quickly, both through the birth of new worker ants and also by new colonies being formed by new queens that leave one established colony," Dobata said.

And Japan has a number of precedents of invasive species that have wreaked havoc on indigenous flora and fauna.

The largemouth bass was introduced as a game fish in 1925 but has since gone on to decimate local freshwater fish competing for food and space. Listed as one of the top 100 worst invasive species in Japan, it is presently prohibited to import, transport or keep the fish in Japan.

Similarly, American bullfrogs that were imported as part of a plan to export frog meat to Europe managed to escape their enclosures and breed, while Mississippi crayfish brought in for the frogs to eat also managed to get free and multiply rapidly.

Snapping turtles - which can grow up to 15 kilograms and have a beak strong enough to take a person's finger off - have been discarded in the wild by people who bought them as pets and then could not take care of them. Red-ear slider turtles are found in the wild for the same reason, along with American raccoons.

Kevin Short, a professor in the environmental education department at the Tokyo University of Information Sciences, believes the urgency with which the environment ministry is tackling the problem indicates just how concerned it is.

"A few years ago, there were some Australian redback spiders that were found in a cargo in Osaka and a lot of effort went into eradicating them, but these ants are different," he said. "Redbacks are reclusive and really only inhabit certain types of environmens where people seldom go.

"Fire ants are different because their numbers increase exponentially, they form social colonies, they breed very quickly when they are established and they simply have so much more firepower," he said.

"And I would suggest that there is a strong possibility that while they have found a lot of these ants, it only needs a few to get through the quarantine process and they have a foothold.

"I believe there is a good chance that some have got in without being noticed because we are seeing multiple points of introduction, which is just what they need for a well-established breeding population."

The problems that have been experienced by other countries where fire ants have take up residence are clear.

The US spends more than $5 billion (4.4 billion euros) a year on medical treatments, damage and efforts to control the pests. The ants also cause around $750 million in damage a year to agricultural assets, such as livestock and crop losses, as well as vet bills.