Japan, EU narrow differences over free trade agreement | Asia | An in-depth look at news from across the continent | DW | 28.06.2017

Automobiles, agriculture and non-tariff barriers remain the biggest stumbling blocks to a deal that will be worth an estimated one trillion euros in additional annual trade between Japan and the EU. Julian Ryall reports. 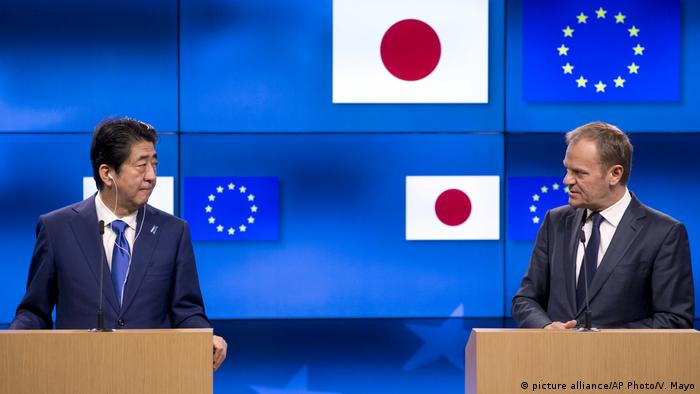 Japan and the European Union are inching closer to a free trade agreement that will bind two of the world's largest economic blocs. There are hopes that the last remaining hurdles presently holding up the deal can be overcome before Prime Minister Shinzo Abe travels to Europe next week for a meeting of the Group of 20 industrialized nations.

Of the handful of issues that still need to be resolved, Japan's major concerns revolve around tariffs imposed on vehicles exported to the EU, while Europe is calling for similar taxes on agricultural and food products to be lifted by Japan.

Another area of concern for the European negotiators is non-tariff barriers on imports into Japan, while questions inevitably surround the future relationships between the EU, Japan and the United Kingdom after the British government completes its withdrawal from the European Union.

An indication of how close the two sides are to a deal that could be worth as much as one trillion euros ($1.1 trillion) in increased annual trade was evident in Tokyo this week, when Abe met with Czech Prime Minister Bohuslav Sobotka.

"In order for Japan and the European Union to continue to raise the banner of free trade, Japan and the Czech Republic will work together toward a broad agreement as soon as possible," Abe told reporters at a press conference after his meeting with PM Sobotka.

"For Europe, the main focus of negotiations has been on the agricultural sector and food exports, and there are high hopes that this deal will lead to a significant increase on exports to Japan - as much as 50 percent - on present levels," said Martin Schulz, senior economist with the Fujitsu Research Institute.

One area within that sector that is causing problems is the tariffs imposed on European cheese, with Japan resisting calls for full-scale lifting of limits out of concern for the impact on domestic dairy farmers.

Consumption of cheese is rising rapidly as Japanese consumers increasingly embrace foreign cuisine. The 320,000 tons that was consumed in fiscal 2015 was 20 percent higher than 10 years previously, with fully 85 percent of that cheese coming from abroad. Europe delivered nearly 20 percent of total imports and there are hopes that consumption will spike if prices fall as a result of the trade deal with Tokyo.

Yuji Yamamoto, Japan's agriculture minister, on Tuesday suggested that the two sides were still some way apart on the issue when he urged the EU to give ground in its demand for Japan to open its dairy products market.

"Japan still needs a little bit more preparation time to create conditions for it to compete with European firms," Yamamoto told reporters in Tokyo after a telephone conversation with Phil Hogan, the EU agriculture commissioner.

Europe is similarly hoping that Japan will adopt the same standards on food additives that are required in Europe and accept European standards for pharmaceuticals, which will do away with the time-consuming and costly need for products to undergo new tests before being permitted to be sold in Japan.

"Most of these things seem to have been broadly agreed since the two sides first began negotiations in 2013, so I would suggest that the final step is a question of political will," he added.

Read: Pence: Talks between US and Japan could lead to free trade deal

Other analysts believe the deal with the EU is in part designed to signal to the United States the importance that Japan places on multilateral, multi-sector trade agreements, such as the Trans-Pacific Partnership. One of President Donald Trump's first decisions was to withdraw the US from discussions on the planned deal on the grounds that it was not beneficial to US companies.

Grand strategy towards US

"I would see this deal with Europe as part of Abe's grand strategy to put pressure on the US over TPP by demonstrating Tokyo's ability and willingness to reach out to other countries and blocs to reach agreements," said Stephen Nagy, a senior associate professor of international relations at Tokyo's International Christian University.

"Japan is trying to put pressure on the US to come back to the TPP negotiating table primarily because of the joint security component within the proposed agreement, which is important to Tokyo because of Beijing's aggressive actions in the South China Sea," he told DW.

Japan wants the deal to "link the signatories to the norms and values of the international community" and make it harder for member states to effectively ignore other nations' claims to territory and occupy disputed islands, he added.

Read: Trump and Abe hail US-Japan alliance as crucial to peace and stability