Presidents Nicolas Maduro and Donald Trump both extended olive branches, saying they would be willing to meet. But Maduro also blamed the US for staging a drone attack against him and plotting his overthrow. 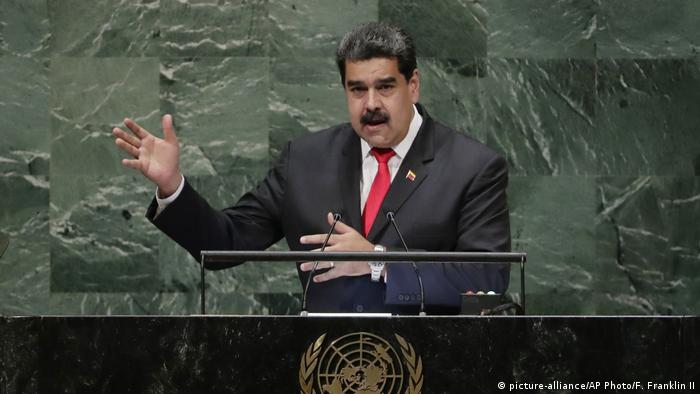 Venezuelan President Nicolas Maduro took the podium at the UN General Assembly on Wednesday, where he denounced the "aggression" of the US towards his country, but also offered President Donald Trump the opportunity to meet.

"Venezuela comes here to tell its truth. I bring the truth of a fighting, heroic and revolutionary people," Maduro said in a 45-minute, rambling speech at the UN General Assembly. The embattled president blamed the country's current economic crisis on US policies.

Earlier that day, Trump said he would "certainly be open" to a meeting with the Venezuelan president. "Anytime I can save lives and help people — if it's one life, I'm certainly willing to meet," Trump told reporters earlier on Wednesday.

Maduro responded in kind. "I stand ready to talk with an open agenda about anything that Trump might wish to talk about ... openly, sincerely, honestly," he said. It remains unclear, however, whether Maduro and Trump will meet.

Both leaders may have expressed openness to dialogue, but at the same time they stuck to their hard lines. The US president also told reporters that "all options are on the table," when it came to Venezuela.

"The strong ones and the less than strong ones. Every option. And you know what I mean by strong," he said, suggesting force could be used against Maduro.

Likewise, the Venezuelan president went on the defensive, blaming most of the country's problems on the US and alleging that "the same blueprint of weapons of mass destruction used in Iraq" was being employed to depose him.

Maduro repeated his claim that Washington had "prepared and funded" the August 4 drone attack on him in Caracas, calling on the UN to carry out a special investigation of the incident. He also accused the US of "financial persecution" and of imposing "illegal sanctions" on Venezuela.

The Venezuelan leader is facing mounting pressure from neighboring nations. Argentina, Canada, Chile, Colombia, Paraguay and Peru  submitted a request on Wednesday to the ICC to investigate alleged crimes against humanity in Venezuela.

This is the first time that countries in the Americas have filed complaints against another member country at The Hague.

The ICC request said crimes against humanity, including torture and extrajudicial killings, had been committed in Venezuela since February 2014. While the complaint will not automatically lead to an investigation, it could help speed up an ongoing examination that the court was already processing.

The humanitarian tour will provide medical help to the crisis-ridden country, but Venezuelan officials said it was also part of a "strategic defense operation." Pharmaceutical prices have soared as the currency tanks. (23.09.2018)

OAS chief: 'Military intervention' in Venezuela cannot be ruled out

Venezuelan government: 'Thousands' of migrants want to come back

The government of President Nicolas Maduro said Venezuelan migrants were answering his call to "stop cleaning toilets abroad" and come back home. Maduro has branded the regional refugee crisis a "right-wing campaign." (30.08.2018)