An all-powerful legislative body has passed measures to strip opposition lawmakers of immunity. An opposition leader has been arrested after Venezuela's president accused him of orchestrating a drone attack. 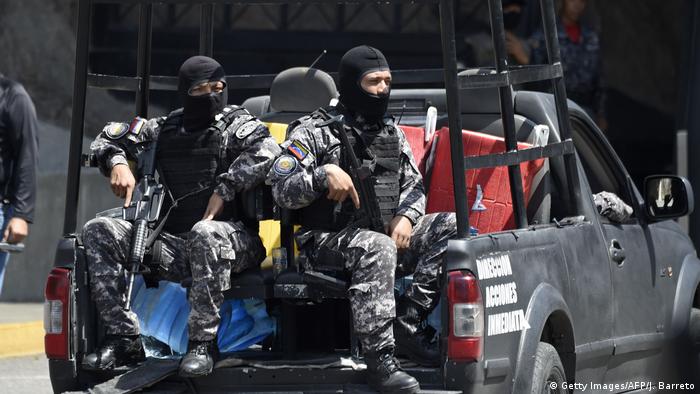 Diosdado Cabello, the head of Venezuela's powerful Constituent Assembly, launched proceedings on Wednesday to try opposition leaders who President Nicolas Maduro claimed were responsible for an apparentdrone attack on him during a military parade in Caracas .

Cabello called Wednesday's session to introduce legislation to remove immunity from prosecution currently protecting lawmakers so they could face trial for involvement in the alleged attack.

Read more: What defense is there against off-the-shelf drone weapons?

Requesens and his sister Rafaela, a student leader, were arrested in their apartment in the Venezuelan capital, according to the Justice First party.

The arrests were carried out by the national intelligence service unit, SEBIN, according to party officials. "Fourteen men of the SEBIN forcefully kidnapped lawmaker Juan Requesens and the president of the Federation of University Centers, Rafaela Requesens," the party said.

Opposition lawmaker Alfonso Marquina, who sits as vice president of the National Assembly, said neither his family nor his lawyers know about Requesens' whereabouts or condition in custody.

"If you thought you were going to intimidate us, scare us, make us run, you were wrong," Marquina said. "You will not silence us, Maduro, not even if you jail all of us."

In a speech broadcast on radio and TV on Tuesday, President Maduro accused both Requesens and Borges of plotting an "assassination" attempt on him.

He described Requesens as one of his "craziest and most psychopathic" adversaries. "Several of the declarations indicated Julio Borges. The investigations point to him," Maduro said.

Footage of the event on Sunday does not show drones and was stopped abruptly as soldiers on parade were seen running away.

A number of people have been arrested by security forces and face charges of treason, attempted murder and terrorism.

Maduro used his TV address on Tuesday to broaden his range of targets responsible for the alleged attack on him.

"I want to explain to the government of the United States and the government of Colombia in detail all the evidence that leads us to accomplices and those directly responsible living in the state of Florida," Maduro said. It was unclear who in Florida he had accused.

Maduro, who has long accused the US of destabilizing his government, added: "I trust in the good faith of Donald Trump."

A broadcast of a DW documentary on Venezuela was temporarily unavailable in the country at the weekend, sparking criticism online. Venezuela's media supervisory agency dismissed charges of censorship as "fake news." (07.08.2018)