After a weekend of deadly violence in Venezuela, the likelihood of a US armed intervention in the country has risen, but the odds are still not high. That's good, say scholars, because such a move would be unprecedented. 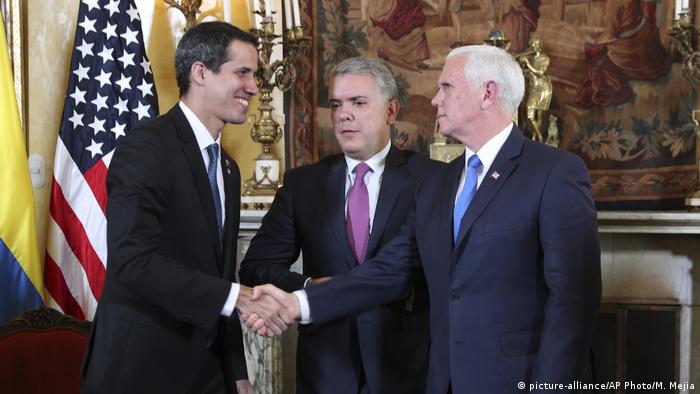 How likely is a US military intervention in Venezuela?

The brutal refusal by Venezuelan military forces loyal to the country's besieged President Nicolas Maduro to allow foreign aid into the country over the weekend has increased the chance of Washington getting involved militarily in the conflict between Maduro and Juan Guaido.

In the aftermath of the deadly clashes, Guaido, who has been recognized by the US as well by many European and Latin American countries as Venezuela's interim president, urged the global community to consider "all measures to free" the country.

On Monday, US Vice President Mike Pence who had traveled to Colombia to meet with the country's President Ivan Duque and Guaido, announced new sanctions on Venezuela and promised Washington would stand with Guaido "until your libertad is restored."

Meanwhile, in Brussels, the EU on Monday rejected an armed intervention in the country. "We must avoid a military intervention," Maja Kocijancic, spokeswoman for EU foreign policy chief Federica Mogherini, told reporters.

The EU's open rejection of military option is timely, noted US-based scholars, because the likelihood of a US intervention has increased since the weekend.

"The military option is more plausible now since it has been since the start of this crisis in Venezuela," said Michael Shifter, director of Inter-American Dialogue (IAD), a think tank in Washington focused in the Western hemisphere.

"It's more likely now than it was on February 23, because the effort to push aid into Venezuela failed," said Gregory Weeks, a Latin American scholar and associate dean for academic affairs at the University of North Carolina at Charlotte.

While the likelihood has increased — both experts independently put the odds now at between 30 and 40 percent — that means they currently still consider a US intervention as unlikely. That's because, they argue, at the moment there simply is no support for such a move in Europe and the rest of Latin America.

"You don't even have Bolsonaro in Brazil really saying that," said Weeks, referring to Brazil's firebrand president and Donald Trump ally Jair Bolsonaro who has called for the ouster Maduro.

But, he added, the current political climate that makes an intervention unlikely could change fairly quickly. "At the moment we don't have a particular spark," said Weeks. "But we have seen that in the past. And that's something that I think would definitely increase the chance and change the calculation of armed intervention."

Such a "spark" that could change the political calculus could be large scale deadly violence against the opposition, the imprisonment or harming of opposition leader Guaido and an attack against US diplomatic personnel in Venezuela.

Read more: Trump to Venezuela's military: 'amnesty or lose everything' 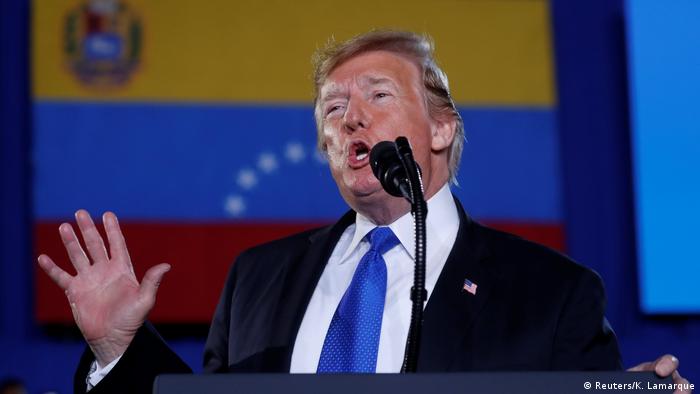 Would there be any precedent for a US military intervention in Venezuela?

No. While Washington has a long track record of interfering in Latin America nothing would compare to an armed intervention in Venezuela to oust the embattled Nicolas Maduro, noted the scholars.

"The US has historically never sent military troops to topple a regime in South America – never," said IAD director Shifter. He said that Washington's armed intervention in Panama some 30 years ago, sometimes cited for comparison because it is the most recent open military move by the US to topple a government in the hemisphere, is not an apt reference point for a potential intervention in Venezuela.

It is a much smaller and vastly different country that has had much closer ties to the US than Venezuela which made Washington's intervention during a very different time comparatively easy. "This is not a Panama," said Shifter.

"I don't think we really have any great comparison," said Weeks, who noted that the US has typically intervened militarily in much smaller and much more dependent countries in Central America and the Caribbean. 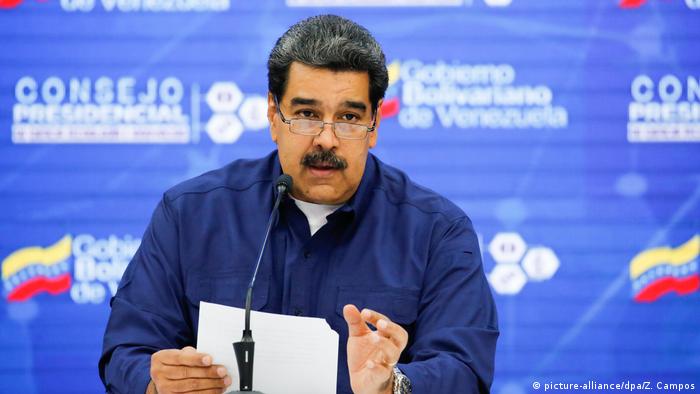 Maduro has denounced US support for his opponent Guaido

What are the possible consequences of US intervention?

The possible negative repercussions of a US military intervention are so great and unpredictable that both scholars said they oppose such a move.

There are currently no good options because even increasing the sanctions is bound to mostly hurt the average Venezuelan, said Weeks. Still, he added, "I do think that the military option is the worst," because it will lead to even greater violence and death with no guarantee of success.

While the US would probably succeed in overruling the Maduro government militarily, the problem is what would happen in the aftermath of Maduro's ouster, concurred Shifter who noted that there all different kinds of militias in the country, that the Colombian insurgency group ELN operates from Venezuela and that there are a still many Chavistas who will likely be ready to defend what they still view as the Venezuelan revolution. Combined, said Shifter, it presents a volatile and dangerous mix for a possible outside military force.

"Some people may say, it's clean, the US will go in, get rid of Maduro and everybody will sort of cheer and welcome the US with open arms and Guaido will preside over a transition government and hold elections and it will be all kind of smooth and fine," said Shifter. "I am not as confident that that would happen that way."

Recent violence in Venezuela has steeled US resolve to support Juan Guaido, US Vice President Mike Pence has said while meeting the interim president in Bogota. The EU has rejected the idea of a military intervention. (25.02.2019)

Venezuela's opposition is preparing to bring shipments of food and medical supplies into the country — against the orders of embattled acting President Maduro. The plan could lead to clashes with soldiers at the border. (23.02.2019)

More than 3 million people have fled Venezuela in recent years. And many companies have moved away, as well. But Thilo Schmitz, a German-Venezuelan businessman, remains optimistic that better days are around the corner. (15.02.2019)