Donald Trump to Venezuela's military: 'Accept amnesty or lose everything'

US President Donald Trump called on the Venezuelan armed forces to back interim President Juan Guaido. Trump said he sought a peaceful transition of power in Venezuela, but that "all options" remained open. 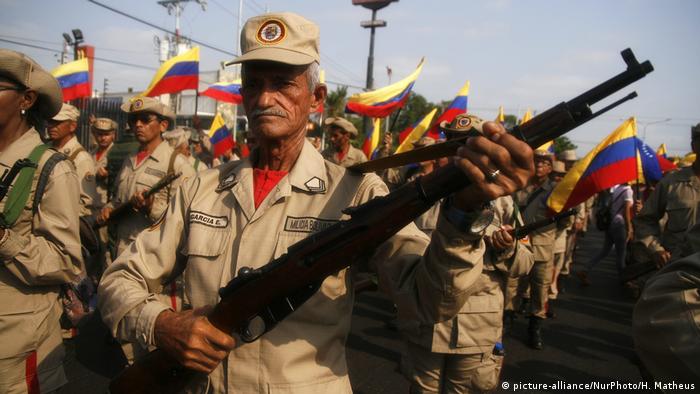 US President Donald Trump reaffirmed his commitment to Venezuela's interim President Juan Guaido and delivered a strong rebuke to socialism, in a speech he delivered on Monday in Miami.

"A new day is coming in Latin America," Trump said, addressing a lively crowd at Florida International University. The setting was symbolic, as Miami has become a home to a burgeoning community that boasts 100,000 Venezuelans and Venezuelan-Americans, the largest in the US. 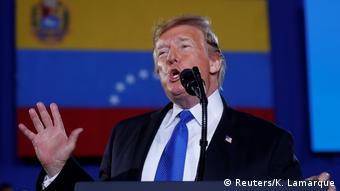 Trump gave his speech on Venezuela in Miami

The city is also the historic stronghold of Cuba's exile community.

Trump's speech comes at a critical week in the ongoing power struggle between Juan Guaido and acting President Nicolas Maduro. The 35-year-old opposition leader has led a push to bring humanitarian aid into the country on February 23.

The move will serve as a test for the country's military, which has been instructed by Maduro to repel the aid and fortify the border.

'All options are open'

Trump urged Venezuela's military to accept Guaido's offer of amnesty and demanded that they allow in the food, medicine and other supplies, which have already arrived at major distribution centers along the border.

A failure to do so, the president said, would have consequences.

"You will find no safe harbor, no easy exit and no way out. You'll lose everything," Trump warned.

"We seek a peaceful transition of power but all options are open," he reiterated.

The US president used the opportunity and the receptive audience to deliver a strong condemnation of socialism, saying the ideology was dying.

"Liberty, prosperity and democracy are being reborn" throughout the hemisphere, Trump said. "This will become the first free hemisphere in all of human history," he added.

Read more:Venezuela and the US: From friends to foes

Nicolas Maduro addressed the nation in a state television broadcast to respond to Trump's speech, lashing out at the US president for addressing Venezuela's military.

The embattled acting president accused Trump of speaking in an "almost Nazi style."

"Who is the commander of the (Venezuelan) armed forces, Donald Trump from Miami?" Maduro said. "They think they're the owners of the country," he added.

Maduro said on Monday that he was planning his own food and medicines aid drive in Cucuta. The embattled acting president said his humanitarian assistance was for the people of Colombia, whom he said were suffering from poverty.

Communications Minister Jorge Rodriguez also announced that the government would stage a concert on the Venezuelan side of the border with the city of Cucuta on Saturday. The event is meant to rival the charity concert that British billionaire Richard Branson has scheduled for Friday on the Colombian side of Cucuta.

"People from all over the world want to take part in this message of love, solidarity and denunciation against the aggression that they're trying against the Venezuelan people," Rodriguez said, adding that the theme of the government's event will be dubbed "Hands Off Venezuela."

The government of embattled acting President Nicolas Maduro has barred five European parliamentarians from entering the country. They had been invited to visit by Maduro's rival for power, Juan Guaido. (18.02.2019)

Rubio said it would be a "crime against humanity" to not let US aid flow into Venezuela. A fierce supporter of acting President Juan Guaido, he has been a central architect of White House policy toward Nicolas Maduro. (18.02.2019)